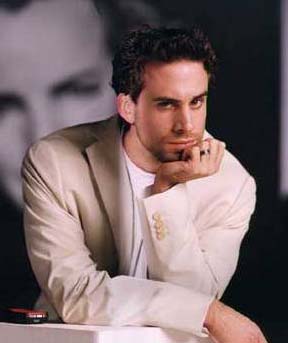 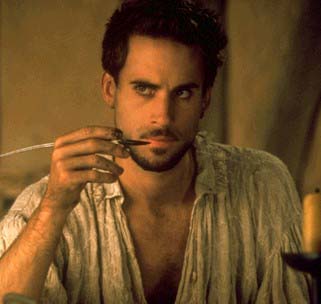 It was bound to happen at some point, you know. All of you guys who have been biting your nails and tearing your hair out in anticipation of Meg's write-up on Joseph Fiennes can now take a breather and try to mellow out. He's here! So chill, already!

Not that I don't understand the reason why you've worked yourselves up into such a lather. I've seen "Shakespeare in Love" and "Elizabeth." Heck, I've seen 'em twice. And with each progressive viewing, I became more and more sure of one thing -- Joseph Fiennes is a supreme cutie. A cutie so cute that I can hardly stand it. And when he plays William Shakespeare, second in favorite-author-status only to Faulkner for me, my heart gets all racy and stuff. Or, as Patrick Swayze would say, it goes a a little bit like this: ga-gong, ga-gong, ga-gong (well, sorry, but "Dirty Dancing" comes on TNT practically weekly -- it's in my head all the time. IT'S NOT MY FAULT!).

Plus, as I'm sure you're all well-aware, Joseph Fiennes also has a very swarthy brother, who would make a nice rebound if things with Joey just didn't work out. That's always a Boyfriend quality that scores them extra points. Less risk that way, you see? A Plan B already established and ready to go. Just the way I like it. And that goes double when the Plan B is as handsome and talented as Joseph Fiennes' brother, Ralph (pronounced, in snooty tone, as "Rafe").

We know better than to mention that to Joe when we see him, though, right? Because I know I've read in at least one place that Joseph really really really hates being compared to his brother. And who can blame him? While Ralph shares one fine quality with bro Joe (both painfully cute), that's about where the similarities end. Not only are they physically quite different (Ralph -- big and imposing; Joseph -- small and holy-cow check out that hair wouldja?), but their personalities are also just about as opposite as they could get. Which is great news, really. Because if you're going to have a Plan B, it makes absolutely no sense to have him be identical in cuteness AND personality to Plan A. That's just not going to work, girls. Trust me, this much I know is true.

But enough about the brother, let's talk about Joe. I first experienced Joseph Fiennes when the rest of you did -- with a viewing of the marvelous "Shakespeare in Love." What's good about this movie is not only that it's a sweet romance with fabulous costumes, incredible sets, and a horde of some of the most talented actors EVER. It's also funny (which you would've been expecting if you knew it was written by Tom Stoppard of "Rosencrantz and Guildenstern Are Dead" fame). And funny, romantic, beautiful, and talented are exactly the same four words I use to describe a solid 99% of the Boyfriends. Hmmmm, coincidence? I think not.

My next Joe experience was with the movie "Elizabeth," where Joe plays essentially the same character (except, he's not Shakespeare). Again, a man cheating on his wife with a beautiful blonde who is considered by most to be far too good for him. We'd mind about this (cheating on your wife really stinks), except that we, too, are beautiful and blonde and thus, this kind of trend bodes well for us. Woo hoo! Granted, Joe looks like he might be just a tad too short for us (though I read somewhere he's about 6 feet tall, I just don't believe it). But what he lacks in height, he more than makes up for in dark curly hair and twinkling eyes. And that cute little smile. Sigh. Mahvelous. Simply mahvelous.

Now, before I get too carried away, let me give you a little background information on this week's Boyfriend. He was born in Salisbury Wiltshire, England, on May 27, 1970. Joe has seven siblings, including a fraternal twin brother named Jacob who is a prize-winning gameskeeper (whatever that is). His mother was a writer (she died of cancer) and his father is a photographer for the Carnegie Club. The creativity gene seems to have passed to each of the Fiennes children, the vast majority of which are involved in film or theater.

Joseph is highly skilled in archery, fencing, horseback riding, and swimming, which scores him a lot of points with me because I, too, am highly skilled in these things (well, two out of the four anyway, though I wasn't too bad at archery when I did it that one time in girl scout camp back when I was in elementary school -- I'm sure if I had the opportunity, I'd be a regular William Tell). He's also, obviously, highly skilled in acting, as evidenced not only by the two movies I've mentioned about, but the 5 he's made since them, none of which I've seen, but all of which I've heard good things about. When you look up Joseph Fiennes on the Internet, however, what you see the most about isn't his movie acting, it's his theater work, of which he's done about a ton and a half, to great renown in his home country. He's also, to his great credit, played the role of Beowulf in a television production. Can you believe that? Those Brits made a tv movie out of Beowulf (and I think it was a cartoon ta boot)! While we're sitting on out butts over here in America watching "Who Wants To Be A Millionaire," the British are over there sipping tea and watching the classics drawn out in technicolor and narrated by Shakespeare. Really, it's amazing we beat them in that war 200 years ago. If we had to go up against them in a cultural battle, we'd get creamed.

But back to the Boyfriend. Joseph is seven years younger than Ralph, but he's garnered an equally good reputation for his talents. He's an alumnus of the Guildhall School of Music and Drama, but it's really his work with the Royal Shakespeare Company that stirs up the most comparisons to his elder sibling. His first professional stage appearance was in the West End in "The Woman in Black," followed by a role in "A Month in the Country." Next up in his movie career are three films that have had fairly positive buzz lately: "Dust," "Killing Me Softly," and "Enemy at the Gates." For descriptions of the plots of these up-and-coming flicks, check out Joe's IMDB page.

But what we really want to know is this: when are the brothers going to show up in a movie together? If they need a leading lady, might I suggest myself? It's either me or Cate Blanchett again, and I'm just as pale and sassy as she is, so why not? I guarantee my salary is going to save you a bundle. Cuz all I want is a double-date. Plan A and Plan B sitting across from me at the Queen's place around 4pm, munching on crumpets and telling me all about my eyes. It just couldn't get any better than that!

In the meantime, however, I'll settle for watching "Shakespeare in Love" and "The English Patient" back-to-back. And while I'm sure they both hate me now anyway (it's got to be tough having a famous brother -- and that goes for both A and B here), after we spend six or so months together making that film, it's virtually guaranteed we'll end up the best of friends. I'll be sure to pass along all of your numbers, by the way. Though I can't promise they'll have time to call.