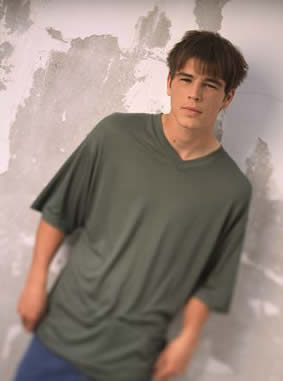 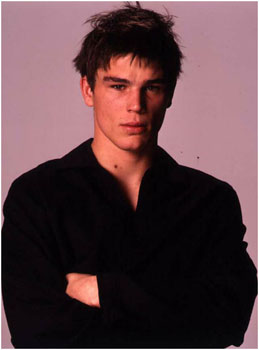 This week's Boyfriend comes as a bit of a surprise to me, to be honest. Over the last few months, I've been watching a lot of his movies, just to see what all the hoopla was about. And, until very recently, I thought it was, well, much hoopla about nada. I'd been boggled by the number of drooly emails I've gotten about him -- what with those big bushy eyebrows and that TERRIBLE Prince Valiant bowl cut he so often sports. And let's not even talk about the perpetually squinty eyes, okay? He's just not my type; I'm afraid I just couldn't muster up even an ounce of attraction for him.

But, sometime during the last few weeks or so, something weird happened. The more I experienced the actor formerly and presently known as Josh Hartnett, the more I started to really like him. There's something about his attitude -- he's cocky but without an ounce of arrogance (if that makes any sense) -- that started to really charm me. It's an attitude you have to get to know to fully appreciate, and one you can see in every move he makes on-screen, from his swagger to his crooked smile. And right when I was starting to think I might have been wrong about Josh, I finally saw "Black Hawk Down," in which he plays an extremely intelligent and brave young Army Ranger. They gave him the traditional military buzz cut for the role and I have to say, when he's not wearing the squared-off bangs, he's pretty amazingly cute. Ditto for when he's got the Prince Valiant hair-do goin' but hasn't combed it since he rolled out of bed (see messy hair shots above). Now, if he'd just wax those brows a bit and quit squinting so much, I'd be completely unable to do anything but daydream about him 24-7. Lucky for me, since I have a full-time job and a web site to maintain, he's got too much character to go for vain changes of appearance like that -- he is who he is and, dammit, so are his eyebrows (which I've nicknamed Ernie and Bert, by the way -- Ernie's the left one). He's certainly not going to change all that just because of me. After all, which one of us is on the cover of Vanity Fair from time to time, I ask you? Sure, my haircut may be a lot cuter, but I didn't steal the girl in "Pearl Harbor," now, did I? Ha HAH.

That's RIGHT. So, you go, guy. Just ignore me. Because, frankly, the more time I've spent looking at Josh Hartnett, the more I've decided my first impression was totally wrong. He's not only cute, he's downright hunky. And even though he's prone to playing teenaged boys with chips on their shoulders, you'll also notice that every single character of his has been mega-intelligent (think "The Faculty"), extremely charming and polite (think "Halloween H2O" and "Black Hawk Down") and a VERY good kisser (think every movie he's ever made) (oops, except for "Black Hawk Down" -- no chicks). Smart, cute, talented, kind, broad-shouldered, crooked-smiled, and messy-haired. Oh boy, I'm in LOVE.

Now, where was I? Right. "Black Hawk Down" is actually the last movie of Josh's to hit the big screen and I only just saw it myself two days ago. From this you might start to think that this is another one of those write-ups that came out at the last minute totally on a whim. But I have to admit I was actually starting to develop a crush on Hartnett as early as a month ago, when I finally got around to watching "The Faculty" (after being assured by many fans of Elijah Wood that it was worth a screening, even though it DID look kind of silly). I actually really liked "The Faculty" -- for those of you who don't know me well, I should inform you that one of my favorite film genres is really bad contemporary horror movies. And "The Faculty" fits nicely into that category (although it's almost too well acted -- Elijah Wood and Josh Hartnett are two actors I really think are quite talented, and I like Clea DuVall (who played Stokely) as well). It's a great little flick about a high school taken over by aliens. Elijah and Josh play two guys on the opposite ends of the social spectrum (Elijah is a geeky school paper photographer and Josh is a bad boy who makes drugs in his spare time with stolen school chemicals), who come together to stop the hostile takeover of their town by this disgusting amphibious alien things that keep eating their teachers. Can't go wrong with a plot like that, can ya?

Nope. Especially if there are hobbits and Hartnetts at the helm.

I've recently seen a few other Josh Hartnett movies as well. The first Hartnett flick I ever saw, way before I even knew who he was, was "Halloween H2O," the latest in the Halloween horror series (and the best since the original, if you ask me). Since then, I've followed that up with "Pearl Harbor," "The Virgin Suicides," and "O," the modernized version of Shakespeare's "Othello." Of those three, I thought only "Virgin Suicides" was any good (and it's a downer, you've been warned). "Pearl Harbor" was just as I expected -- overdone and kind of silly. And "O" didn't work for me either. Because this is my web site and I'm allowed to wander off onto any tangent I want to, allow me to expound upon that statement: In the modern, high school setting, Julia Stile's Desdamona was clearly too smart to be tricked in the way Desi gets tricked. I can totally believe guys still act that stupid these days, but women have gotten a lot savvier since Shakespeare's day. So, while I could believe it when Odin (Othello) lets his jealousy completely blind him, I totally couldn't believe Desi didn't just smack him and tell him to snap out of it. Julia Stiles' Kate in her other Shakespeare update, "Ten Things I Hate About You," would've just rolled her eyes and booted his butt right out the front door. And then she would've stomped out behind him and bang-zoomed Hugo (Josh's Iago) to da moon. So, I just wasn't able to suspend enough disbelief to pretend she'd simply roll over and put up with that kind of macho baloney. Julia Stiles is too cool for school, y'all. Maybe if they'd cast Jennifer Love Hewitt I would've done better with it. Except then I never would've rented the film to begin with. No offense to Jenny and her fans.

I realized just today, by the way, that I'd also seen Josh Hartnett in another role a very, very long time ago. Fans of Robbie Coltrane may remember that in about 1997, the U.S. tried to rip off Robbie's extremely successful British series, "Cracker." The American version, which starred Robert Pastorelli as Fitz and Josh Hartnett as his troubled son Michael, ran for less than a season before fizzling out completely (I know Fitz, and Robert Pastorelli, sir, is no Fitz). Still, lucky for Josh, "Cracker" was on just long enough for the big wigs to notice him and it was shortly after its cancellation that Josh got his first movie role in "Halloween H2O."

But let's not get ahead of ourselves here. In fact, let's go back a few years and start over at the beginning. Joshua Daniel Hartnett was born on July 21st, 1978 in either St. Paul, Minnesota or San Francisco, California (nobody on the web seems to agree about this). He was the oldest of four children (he has two brothers and one sister). In high school, he played a lot of football. But when an injury left him benched for good, his aunt persuaded him into trying out for a role in a local play ("Tom Sawyer" -- he played Huck Finn). The play was successful and Josh was bit by the bug. He continued to snag small theater roles and eventually moved to New York to attend SUNY. Unhappy there, he soon gave up on the whole college thang and moved to Los Angeles, where he almost immediately auditioned for and got the role in "Cracker." Cracker fizzled and Josh landed the role in "Halloween H20," a part that garnered him a nomination at the MTV Movie Awards for "Best Breakthrough Performance."

Although many of his early movies were not terribly successful at the box office, Josh was quickly becoming established as one of Hollywood's hottest actors (are you surprised? Me neither). The box office smashes "Pearl Harbor" and "Black Hawk Down" are just the beginning, I suspect. Not only is Josh now famous for his good looks, but his acting abilities have grown with every role he's taken on. Every character I've seen him play has been a character that stood out, and you have to have more than a great bone structure and a swoon-inducing grin to make that happen, my friends. I won't be the least bit surprised if Josh Hartnett continues to bring in the bucks on the big-screen, long past the time when the other lookers of his generation start to fizzle out. Now, if only he'd make a movie in my town so I could "accidentally" run into him in a local bar and steal a smooch! Life would be perfect! I'm sure every famous Hollywood hunk needs a good librarian girlfriend at their side. Aren't you? Josh -- pssst! Call me!