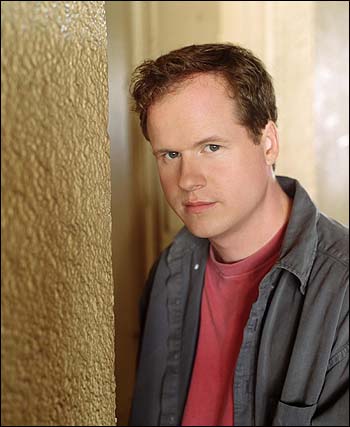 Okay, so, as most of you must have worked out by now, I'm a pretty big fan of "Buffy the Vampire Slayer," despite the fact that in some circles, this instantly earns me a first-class ticket on the fast train to Dorksville, USA. To heck with circles, though, "Buffy" is smart and funny and you can't make me stop repeating that. It's my site, I'm in charge and. . .you aren't actually listening to me, are you. (<-- rhetorical question.)

Hey, okay, fine. Your loss. Because not only is "Buffy" smart and funny, it's positively PACKED with Boyfriend material. I've already featured, what, five guys from Buffy? And I'm not even close to being ready to quit on the theme yet. Actually, let's enumerate, in chronological order:

So, if anybody is actually surprised to see that this week's Boyfriend is Buffy creator Joss Whedon, I guess you just really haven't been paying attention.

Well, actually, I'm sure some of you actually HAVE been paying attention and are surprised nonetheless. When I mentioned this crush to another huge Buffy fan I know, she replied, "But Joss is so. . .so. . .pasty! And. . .and. . .DORKY!" Apparently, it does not logically follow that a fan of the characters is also a fan of the creator. I'm sure there's a religious metaphor in there somewhere, but I'm in no mood today to go after it.

Because fooey, I say. Pasty and dorky? First of all, nuh-uh! And second of all, even if so, what could be better? Especially when pasty and dorky is combined with brilliant, talented, cute, and almost unbearably funny? And the "brilliant" and "funny" parts go triple. Just like the espresso in my latte this morning.

Unfortunately, we've been seeing a lot less of Joss in the recent seasons of Buffy, a loss that really shows. The show is losing its edge -- its quirky humor. I can tell just from the dialogue, actually, when an episode was written by Joss and when it wasn't. He see things, thinks things, connects things that others don't see, think, or connect in quite the same brilliant/funny kind of way. It's this way of looking at things that truly makes a Joss Whedon episode stand out as a work of genius, instead of just a work of silliness and fun (which the non-Joss episodes are, I'll grant you. I mean, well, honestly, a blindfolded anteater could write an episode of "Buffy" and those actors would be able to turn it into something great -- not that I'm comparing non-Joss Buffy writers to blindfolded anteaters. Or anything.).

But, thankfully, Joss hasn't pulled out of Buffy just so he can free up time for fabulous vacations and splurges at Hollywood Video (oh wait, maybe I'm the only person who impulse-shops at Hollywood Video) ("Hey, I don't think I've seen THIS really awful horror movie from 1983. Better add it to the pile!"). No, instead, Joss has been working on NEW shows with which to wow us into worship. Two new shows, to be exact.

The first is "Ripper," which I mentioned last week in the Anthony Stewart Head write-up and which I am thusly not going to get into here. La la la. Cue Bobby Brown's "My Prerogative." (Or, better yet, don't.)

The second show, on the other hand, is one I am in the mood to talk about today. It's a sci-fi western called "Firefly" and it just started on FOX this season. And yes, I did just say "sci-fi western."

Okay, how best to describe this show? I guess like this: It's about a group of people who essentially spend their lives flying around in their clunker of a spaceship looking for odd jobs. They periodically land on a planet, turn a few tricks (literally for one character, figuratively for the others), then stock up on supplies and head back into space until their next gig. So far, it's been pretty entertaining, but despite the fact that I really REALLY want Joss Whedon to like me, I have to say that overall, I'm a bit disappointed. A lot of the dialogue is pretty bad, some of the characters are flat and their interactions seem forced, many of the jokes aren't that funny, and much as I hate to say it, some of the actors are truly awful. So, necessarily, I worry about its staying power.

And why do I worry? I mean, if it's not good, wouldn't I WANT to see it go the way of so many other new bad shows (sorry about "Push, Nevada," Mr. Affleck, but what were you THINKING?). The truth is, I don't want it to get cancelled. In fact, I desperately don't want it to get cancelled. Because despite the fact there's a lot to complain about at the moment, I do think the show COULD be pretty good. After all, it's been a really long time since Western fans (moi) had a show to tune into every week. And even longer since Western fans had a SCI-FI show to tune into every week (I dare say the last time was back when "Wild Wild West" was not a movie starring Kevin Kline and Will Smith) (in other words, a really long time ago).

I have no idea how well "Firefly" is doing in the ratings, but I'm pretty sure most "Buffy" fans are going to pull out soon. It's kind of a shock to the system to see the name Joss Whedon attached to a show with THAT choppy dialogue and THOSE lame characters (someone vote that River girl off the island before we have to suffer through another subplot about how afraid of the preacher's HAIR she is. I beg you. Do it. For me. Please.) (And while you're at it, make that girl Kaylee stop using the word "ain't"? It just doesn't come naturally enough to her. And my nerves are already shot enough these days, what with the teetering ratings threatening to tip a few of my other favorite shows into the crap heap).

But, look, despite the fact that every week, I think, "Well, that was kinda okay," instead of, "Hot damn! Joss Whedon is BACK!" I am completely willing to hang in there for a few more months and see what happens. I like the main characters (Mal and Jayne are my current favorites) and I like the concept. There's a lot to work with (most especially that intro thing about the Earth being "used up" (you call that sci-fi detail?) and guns being the way to hold onto a job. Yeah, that whole thing right there could use some work. I mean, honestly, everybody knows the real way to hold onto a job is to shag the boss. Who are they trying to kid here?) (Ha ha, joke!)). So, do me a favor, "Buffy" fans on the verge of giving up -- keep watching. At least until the show has a few more chances to even out. I have faith that Joss will get into a groove soon -- we know the man is certainly smart enough for the job. And once he hits that stride, this show is gonna kick intergalactic six-shooter hiney.

Because Joss is, in my humble opinion, one of the greatest writers of our time. He's absolutely amazing at turning everyday events into incredible metaphors for life in general. And, even better, he makes you laugh and think, all at the same time. He's created some of the most complex, memorable, and even admirable characters ever to grace a television network, and he's given them the kind of lines you always wish you could've thought up. Xander, Buffy, Willow, Giles -- they have all made me laugh so hard my cheeks hurt. And, as certifiable as this may sound, they have become people I really feel like I know. And through them, Joss himself. And what I know so far, I really really like.

Okay, enough with the bad and good. On to the educational. Joss Whedon was born as Joe Whedon on June 23, 1964 (he chose the name "Joss" for himself later in life -- it's Chinese for "Lucky," which is, coincidentally enough, also the name of my cat) ("Lucky" not "Joss"). His parents were divorced and lived on opposite coasts with various of Joss's siblings and half-siblings. Father Tom was a screenwriter and TV producer in Hollywood, so one might instantly assume Joss lived there and that's how he got his foot in the show-biz door. However, in reality, Joss primarily grew up with his mother, who lived in Manhattan and didn't work in the entertainment field at all. He began high school at Riverdale High in NY, but transferred midway to a high school in Hampshire, UK, where he took his A-levels and, presumably, learned everything he ever needed to know about British librarians. (All hail the mighty Giles!)

He returned to the U.S. in the mid-1980's to go to college and obtained a BA in Film Studies in 1987 from Wesleyan University in Connecticut. Soon after graduating, he moved to LA and landed his first writing gig as a story editor and script writer for "Roseanne." He then moved on to the short-lived sitcom "Parenthood," where he served as both writer and producer.

In between that and "Buffy," he worked on several movies scripts, most notably "Toy Story" and most unnotably "Alien: Resurrection." And also, of course, the "Buffy" movie, which I saw in the theater and actually really liked, though lord knows I have absolutely no taste when it comes to movies. The Buffy movie was a total flop, but since it didn't turn out quite the way Joss wanted it to, he didn't give up on the concept. Instead, he moved the concept away from the big screen and towards the WB Network. The pilot episode of the show garnered lots of critical kudos, but Joss wasn't confident that it would last beyond the first season, which is why, you may have noticed, the first season really stands on its own. Joss wanted it to be a complete story, so that even if the show wasn't renewed, he could stop knowing he'd finally gotten it right.

Thankfully, people a lot smarter and hipper than I am jumped on the Buffy bandwagon right away and when the WB tried to cancel it 5 years later, the fans fought so hard UPN picked it up, which is right about the time I started to pay attention. The show has already run for 6 full years, and has just started its seventh. It was named the "Best Show of All Time" at the SFX Millenium Readers Awards in 2002, and has gotten nominations for an Emmy (for "Hush," the silent movie episode), a Nebula ("The Body," which I think is the episode in which Buffy's mother dies), and a Hugo ("Once More With Feeling," the musical episode). Not too shabby for a pasty dork, no?

In his spare time, Joss likes to hang around LA spending time with his wife, the luckiest woman on the planet, and his four cats, who aren't living lives all that shabby themselves. In MY spare time, I like to hang around my living room watching Buffy reruns on FX and wishing the first season of Angel would come out on video already so I could finally jump on that bandwagon as well. In the Land of Meg, the Book of Joss is King. Or whatever I actually mean by that. Watch the shows, y'all.