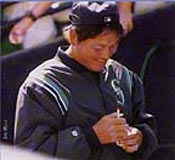 Well, I'll tell you right off the bat that this week's Boyfriend is going to bore most of you to tears. Why? Because YOU don't know who the heck Kazuhiro Sasaki is! Why would you? You don't live in Seattle! You aren't a Mariner's fan! You don't even know which sport I'm talking about!

However, the good thing about this page is that even if you don't know what I'm talking about, I will still attempt to make you chuckle. So you might want to keep reading just to see what kind of crazy thing Meg does next. Also, it would behoove you to continue reading for another reason, and that reason is this: Kazu is adorable.

For those of you who know who Kazu is, I'm pretty sure I don't need to say much more now that I've started. But, for the benefit of the rest of the readers out there, let me begin by defining the term "Kazuhiro Sasaki."

Kazuhiro Sasaki: (Kah-zoo-hee-roh Sa-sah-kee). 1. Japanese phrase used to describe totally adorable and incredibly talented pitchers who are 6 feet 4 inches tall (and let me tell you, this is rare for a Japanese anybody) and are signed with the Seattle Mariners through the year 2001. Often abbreviated "Kazu." 2. Infectious disease that spreads almost instantly through the bodies of Japanese-American female fans waiting outside the bullpen gate when 6 foot-4 inch Japanese pitchers for the Mariners start to warm up. Disease causes uncontrollable shrieking and picture-taking. No known cure.

However, I am here now to tell you it isn't just the Japanese-American girls who are catching this deadly disease when hanging around the bullpen at Safeco Field. It has been known to spread all the way up to the $5 bleacher seats and infect gorgeous young caucasians who are 5 feet 9 inches tall and answer to the name of "Meg." It has somewhat different effects on the "Meg" entity, however, as she almost never remembers to bring her camera to baseball games and therefore can only do the shrieking and not the photo-snapping.

Before I continue, let me stress firmly that just because I caught the Kazu bug (and bad), does NOT mean I am not still extremely infected with the even deadlier "Edgar Martinez flu."

When did I first catch the Kazu Fever? It was after his first game with the M's earlier this year. I watched Kazu make his first big save. Three batters up, 3 batters struck down, bam, bam, bam. And how did the Kaz react to this? With a punched fist to the air like Randy Johnson? With a little dance in the infield? A cartwheel? A self-congratulatory pat on the back? Noooooo. Kazu looked up at his team running out from the dug out and flashed them THE cutest MOST adorable little-kid grin. A grin that says, "I can't believe I just did that! I can't believe I just did that!" It's the same grin 2 year olds get when they accomplish some new feat of growth. The "omigawd, did you just see that? Please tell me you saw that!" grin.

And I have to tell you, as soon as I saw it, the Kazu bug broke through my white blood cell brigade and shazam! I was a goner.

So far this season, Kazu has done a fantastic job. A few lost saves, but hey, nobody's perfect. And they are more than made up for by the great number of absolutely incredible saves. In fact, back in his home country, Kaz holds the record for career saves, saves in a season, AND consecutive saves. He's a Save-Genius! A Master of All Things Saved! The Ruler of the Kingdom of Saving! I love 'im.

A little personal background: Kazuhiro was born in Sendai City, Japan, in February of 1968 (so, he's 32). He's married with two kids, but they all live back home so we can pretend he's a bachelor for the time being (although you guys all know by now that I totally respect the sanctity of marriage and would never try to split Kaz and his wife up. I was just kidding last week when I said we should ship Tim Robbins a truckload of Cheerios, see?) (Yup.) Kaz is the second Japanese pitcher to sign on with the Mariner's by the way (the first was Mac Suzuki) and only the 10th Japanese player to sign on with an American team at all.

By the way, he's as famous in Japan, where he played for the Yokohama Bay Stars, as Ken Griffey is here. Everybody knows Kazuhiro Susuki is a baseball player, though they might not know much more than that. He even did a few commercials there -- one for a sports drink and one for noodles. But his Mariner's commercial is probably his best -- it features Kazu, who doesn't speak English, progressing through his day while listening to baseball announcer Dave Niehaus narrate a baseball game. Later in the day, a teammate says something to Kazu (like "Hey Kaz, how's it goin'?" and he replies with one or another of Dave's famous catch-phrases ("Get out the rye bread and mustard, Grandma!", e.g.). Ha hahahahhahahah. I love it.

As for his reactions to the zillions of fans he's got in Seattle, he seems pretty pleased to see them. He's exceedingly polite and always tries to do interviews when requested (though he uses an interpreter for them and I bet that interpreter filters out stuff here and there. I SWEAR I thought I heard him say "My favorite fan is Meg, up there in the bleacher seats" the other night, but the interpreter said instead, "I just want to do my best to help the team." Now, I lived in Japan for a year, you know, so I'm a little familiar with the language, and I'm positive that that is NOT what Kazu said. But who can I complain to? I don't want to sound egotistical, after all. I'm just hoping he learns enough English to sing my praises next time he's interviewed locally.)

Incidentally, I'm not the only one who's noticed that Kazu stands a good foot above the majority of other Japanese males out there on Earth. He attributes it to a lifetime of "good milk drinkin'" and said his father worked in a milk factory so he had a decent supply of the stuff (in case you never thought about this: there isn't a lot of room in Japan for cows so milk and beef are scarce commodities). Why the "Get Milk" people haven't latched onto Kazu yet is beyond me. He's obviously the perfect poster child!

Something else you may not know is what his nickname is all about. If you've seen an M's game, you've probably noticed the scoreboard flashing the word "Daimajin!!" when Kazu pitches a strike (though, let's hope they've spelled it correctly this time, since they got it wrong the first go-around). In Japanese fiction, the Daimajin is a character made out of stone who comes to life to save a little village from an evil character ("Pedro Martinez"). Now what does this tell you? It tells you Kazu was born to combat bad guys. Born to save the struggling village from a horrible death (and there's nothing more aptly defined as "struggling" than the M's bullpen). Born to pitch fast fastballs and strike the snot out of the Yankees (ptew!). Goooooo Kazu! Woo hoo!

Anyway, for those of you who were interested enough in baseball-talk to read down this far, I hope I've convinced you that:

See what I mean? However, I have no doubt that by the end of the season, Kazu will have picked up enough of the language to communicate effectively over dinner. Even if it is all Dave Niehaus quotations ("And it's goodbye baseball!!")