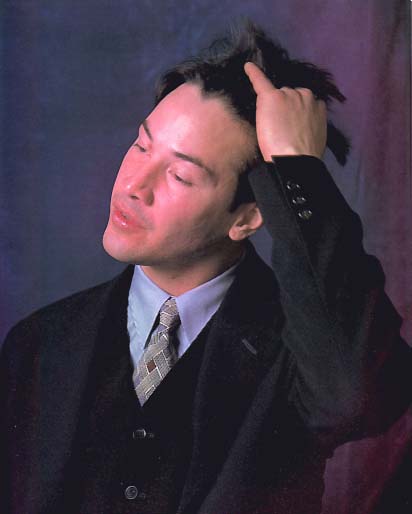 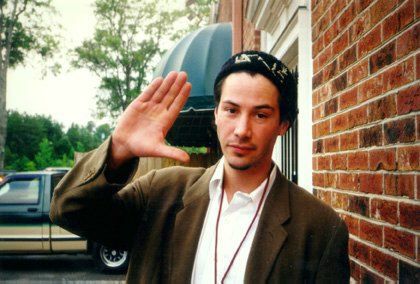 Well, it was bound to happen sometime. And maybe it's best that I just GET IT OVER WITH. So, this week's Boyfriend is Keanu Reeves and when I'm done writing this, I will go stand in the corner and hang my head in shame.

Why? Because I have always tried to seem like I was above going with the crowd. I picked a lot of Boyfriends who weren't all that famous or well-known. I wanted to educate, educate, educate you people on the fine cultural opportunities that abound in this world of ours. But I can resist no longer. I'm just going to say it: I LOVE KEANU REEVES.

This breakdown started last week when I was thinking I'd feature Peter Weller as a Boyfriend at some point and started to look into him. I didn't get very far before I discovered a posting on a web site for celebrity sightings that told the story of the poster's sighting of both Peter and Keanu in a restaurant in LA. She said Keanu was sitting quietly in the restaurant, being exceedingly polite to the waitstaff, talking in a normal tone of voice, and pretty much trying to pretend he wasn't famous. As a result, most people in the restaurant ignored him and continued on with their meals after making the mental note, "Huh, that's Keanu Reeves."

Then Peter Weller walked in with two girls on his arms and another male friend. He proceeded to make a LOT of noise, curse at the waitstaff, and bitch, moan, and complain at every opportunity. As a result, everybody made the mental note, "God, Peter Weller sure is an arse" and then proceeded with their meals wearing scowls of annoyance on their faces.

So, I'm not too sure about Peter. However, the Keanu part got me thinking. Of course, it's nearly impossible to deny that Keanu Reeves is a total babe. In fact, he's one of the few people I will actually describe as "a total babe." He's not just handsome. He's not just good-looking. HE IS A BABE. But could it be true? Keanu Reeves is also very cool?

My curiosity piqued, I began researching him. There are a zillion great Keanu sites out there, most notably KeanuNet and Emily's Keanu Corner, which has, I kid you not, a Keanu Coloring Book on it. The more sites I browsed, the more interviews I read, and the more pictures I ogled, the more I was doomed to come to this horrifying conclusion: I LOVE KEANU REEVES.

The good thing about this is that I know for a FACT that I am not the only Keanu-loving loser out there. I'd say at least 80% of you are also Crazy About Keanu (CAK), and of the 80%, at least 65% are really pissed off right now because I called you losers. But guys! C'mon! He's only good at one kind of role -- the naive unsuspecting hero -- yet he refuses to admit this and continues to show up in all KINDS of wrong place (like, Shakespeare plays). It's terrible! Keanu doesn't belong in Shakespeare! In fact, I'd even go so far as to say Keanu belongs only in the following types of films:

He does NOT belong in the following types of films: But okay, let's say it's not really his fault. It's entirely possible nobody has mentioned this to him -- I mean, if you saw Keanu Reeves walkin' down the street in your direction, would you stop him and say, "Look, Keanu, babe, when you come on-screen in a Shakespeare pic, the audience starts to giggle! Even when you're the bad guy! No, ESPECIALLY when you're the bad guy! It's just not working for you!" Or would you stop him and say, "I know you have a girlfriend, but could you just kiss me on the cheek while my friend over here snaps a picture of us?"

What? you say. Keanu has a girlfriend?? Since when?! Since, I'm sorry to inform you, he made "The Matrix" with Carrie-Anne Moss. And can you blame him? I mean, do YOU look that good in leather? The bad news is, there are still two sequels to "The Matrix" on the way, so you will have to watch them do a lot of smooching on-screen in the future. The good news is, Hollywood romances are usually pretty doomed from the start, so the odds are good he'll be up for grabs in about a year or so. I'll keep an eye out for you.

A little background on Keanu, whose name, incidentally, is Hawaiian for "cool breeze over the mountains." He has two sisters, Karina and Kim, and has repeatedly told reporters that they are the prettiest girls in the world (for which we love him even more) (my own brother would be far more likely to say, "she's the biggest pain in the arse I've ever met"). Keanu has two fathers, a real one (in prison) and a step one (a film and stage director). His real father is part Chinese and part Hawaiian (hence the name, I guess) and he left the family when Keanu was very young. His mom was a costume designer for rock stars (including Alice Cooper -- yikes). Incidentally, Keanu dropped out of high school at age 17 to be an actor and has never returned. How very Bill & Ted of him.

Hobbies include: hockey (was called "The Wall" when playing for his high school team), ballroom dancing (I'm sorry, I just cannot picture this), riding horses, surfing, and playing bass guitar in his cheesy band "Dogstar." Oh wait, did I say "cheesy"? I meant "totally rockin'." Honest!

I think I should also let you guys know that our Boyfriend, Keanu, often does things others might describe as "really incredibly stupid." For example, he once went for a "demon ride" on his motorcycle in Topanga Canyon (which means he sped around at night with no headlights on) which ended, not too surprisingly, with a head-on crash into the side of a mountain. Hard to see those 3000-foot piles of dirt and trees and rocks in the dark, you know. Keanu was in the hospital for a week afterwards (broken ribs and ruptured spleen, which is how he got that cool scar on his belly). He was also arrested for drunk driving once, but that was a long time ago so I think it's safe to assume he's learned his lesson. On a less dangerous but still pretty stupid level, Keanu Reeves has stated that he believes there is some kind of global conspiracy going on that keeps people from talking about the realities of spontaneous combustion. Think I'm kidding? Click here! He also deathly afraid of the dark, which some might call "really incredibly stupid," but which I personally call, "totally understandable and me too."

Silliness aside, there is just something about Keanu that makes everybody love him (though some people are more afraid to admit this than others). I don't think it's just looks, either. Keanu Reeves is both charismatic and, well, actually kind of beautiful when on-screen. And when I say "beauty," I'm not referring to a great butt (well, not always). The way he moves is just an absolute pleasure to watch. He's so fluid. He's almost cat-like. Which is why I think he was born to play roles like Neo in "The Matrix" -- it's really one of the first roles he's had that is solely about physicality (by which I mean the physical way Keanu moves through the film, not his sex appeal). The film is a visual experience more than anything else (like an intellectual experience). No one else could've played that character the way Keanu did. No one else is so completely soaked up by the cameras.

Which is sort of a round-about way of saying Keanu was born to race around on-screen in tight clothing. But, of course, I'd never put it that way because *I* am an intellectual.

Anyway, there you have it, people. I love Keanu Reeves for all the right reasons and none of the wrong ones. I love his presence and not his mind. I love the way he walks across the screen, not the way he says "I had rather be a canker in a hedge than a rose in his grace...If I had my mouth, I would bite! If I had my liberty, I would do my liking. In the meantime, let me be that I am and seek not to alter me!" (Much Ado About Nothing). He is an objet d'art, as the Frenchies would say, and that's a very very valueable thing in this world. Keanu is like a gigantic, great-smelling flower that someone has picked for us. A gigantic, great-smelling flower with absolutely phenomenal abs.