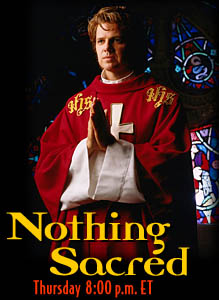 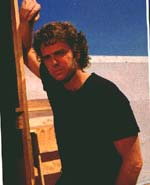 No confessions this week! Isn't that amazing? Even more amazing, though, is how ironic that is considering the current role of this week's boyfriend.

His name is Kevin Anderson and I bet there's not a girl out there who doesn't remember him from the (terrible-except-for-him) movie "Sleeping with the Enemy." Now, this film came out when I was in high school in Pennsylvania. I remember the night we went to see it we hit a possum on the highway next to the theater and I cried. But that's not really the important part. Neither is the part where I tell you I ran right out after I saw the movie and bought Van Morrison's Greatest Hits just so I could listen to "Brown Eyed Girl" over and over again.

Nope. And please don't tell anyone that.

But seriously, the important part is that it was the first time I'd ever seen Kevin Anderson (I think). Oh man, I fell in love. Hard. I even cut out a picture of him from the newspaper and carried it around in my wallet. I found him very inspirational. Inspirational of what, exactly, I have no idea. Of course, I now reazlie I was mistaking that rev in my heart I now know is pure, unadulterated LUST for being plain ol' boring inspiration. Well, hey, I was young and foolish then.

Anyway, he disappeared after that movie and I never saw him again. Sure he probably made some more movies or something, but I never saw any of them. So you can imagine how startled I was to open the tv guide a few weeks ago and see his name. And he's playing a WHAT? A priest? Are you kidding me?

But I watched the show (Nothing Sacred) and it was really terrific! Not only does he play the kind of priest I really have respect for (the kind that's not afraid to be human and screw up a lot), but, and this part is the most important, he speaks Latin. Oh my god! That's better than speaking Russian, and those of you who know me know that means a lot!

I could talk and talk about the show, I guess. But I'd rather talk and talk about his incredibly hair. Just look at it! And he makes the most incredibly sexy facial expressions. His smirk, for example, is so un-smirk-like that I just want to grab him and kiss him. This is big, kids. I'm in love with a priest. Or at least the guy who plays one on tv.

Problem: I hate all these pictures of him. But I had a HELL of a time finding anything about him on the internet. So I'm sorry. He's much cuter than this, trust me. I wish I could find that old newspaper picture (the, uh, "inspirational" one) because then those of you who are thinking "you're in love with a dork?" would REALLY know what I was talking about. But it's gone. It's probably stuck in my physics book back in Pennsylvania. Some kid born in 1980 will stumble across it and throw it away thinking "who's THIS loser?" Memo to that kid: I want that picture back! Memo to Kevin: But I'd settle for the real thing! Just call me, baby.

You know how to call, doncha? Just put your lips together and hit the speed dial button.

MacGyver Factor Score: you guys will not EVEN believe this score. But here it is anyway: 98.9%. And all because one of his lines on the last episode was "Man, I HATE Sunday!" Critics be damned! I love this show!