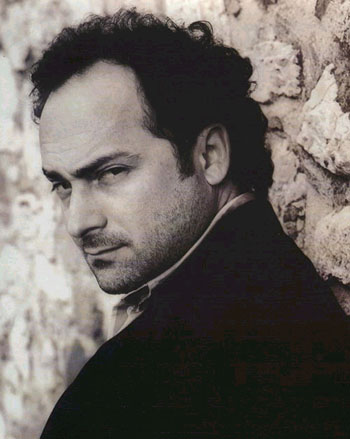 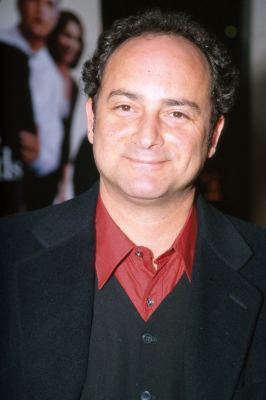 Okay, everybody take two steps back and breathe deeply. Inhale one, exhale two. The long two weeks of shame have come to a close, Brad Pitt is tucked safely into the archives where he belongs, and we're moving on to bigger and brighter things.

Well, actually, shorter and perhaps just a shade darker things, to be honest. But wait, before that statement leads you to suspect I am suggesting that Kevin Pollak is no Brad Pitt, let me jump in here and say, for the record, that you are wrong, wrong, wrong folks. I'm not suggesting anything! I'm flat out telling you the facts. Kevin Pollak is no Brad Pitt! And hurrah for that, I say. Heaven help us. It's about time we get back to what we (I) do best around here. It's time to give you gals a guy who challenges the standard definitions. Who doesn't fit tightly into all the Hollywood grooves. And, who has a little more (actually, a LOT more) to offer than just a set of (amazing, but still vacuous) pectoral muscles.

NOTE: Not that I am calling Brad Pitt vacuous. Didn't we just go over this?

When one thinks of "tall, dark, and handsome," one rarely pictures Kevin Pollak. Why? Is it because he's just not one of those rare men we can accurately describe as "beautiful"? Is it because he's not really even that handsome to begin with? No, it's neither of these two things. We cannot describe Kevin Pollak as "tall, dark, and handsome" for one reason and one reason only: the man is not tall, he is short.

You knew that already, though, right? I mean, you've seen his movies. You've seen him play the short bomb expert in "The Usual Suspects," the short son in "Grumpy Old Men," and, his shortest role, that of one of the teeny brownie guys in "Willow." He's not Kareem Abdul-Jabar, that's for sure. But being short is not the kiss of death for Boyfriends. Especially when those Boyfriends are the king of cool and comedy (and cool comedy) and are named "Kevin Pollak."

Before Kevvy was a super Hollywood ace, you know, he was a stand-up comic. He got his first job as a comedian when he was 18 (though, really, his first gig was at his bar mitzvah where he reportedly convinced the rabbi to act as his straight man and cue Kev's haftorah (speech) with "So, Kevin, I understand something funny happened on the way to the temple?"). After that first gig, Kev was hooked on comedy and he continued to be a regular stand-up guy at clubs in California until, seven years later, he took second place in the San Francisco International Comedy Competition. A year after that, he moved to LA to start a career in film and television.

Kev notes that "your first movie should always be your worst," and is no exception to his own rule. His first film was "Million Dollar Mystery" and was about a bunch of guys looking for bags full of money. In the movie, the guys were able to find three of the four bags and, Kev says, "[the producers] were going to give a million dollars to the audience member who figured out where the fourth one was. I thought it was a good promotion." The movie opened and made about $500. Total, not net. Ouch.

Happily, "Willow" came along and got Pollak some recognition (even though he didn't look much like himself in that one). And a few years later (okay, more like seven) "The Usual Suspects" arrived, thus bringing Kevin to the attention to a much hipper crowd. Though, I'd like to state, for the record, that the movie "Grumpy Old Men" is one of my favorite Kevin Pollak movies of all time. Why? Two words: Under. Dog. Do we love the lovesick ones or what, ladies? Answer: we do. Oh yes, man, we really really do.

A little background on Kev: he was born in San Francisco, CA on October 30th, 1957 (spooky!). As stated earlier, he is from a Jewish background and got his start as a comedian at a very young age (whatever age it is you do your Bar Mitzvah). He is married to long-time friend Lucy Webb (who used to be on the tv show "Private Benjamin" and also was in the film "Corrina, Corrina"). Uh, that's about all I know.

Pollak has a relatively unique technique on researching the roles he takes. His technique is: he doesn't do anthing. He says, "The research I do is to read the script dozens of times until I know every moment. I don't think there's any mystery in acting other than being in the moment." Kind of a refreshing view, considering the hoardes of stories we hear about such-and-such spending a weekend in prison to research his/her role or so-and-so hanging out in homeless shelters, etc. And, his lack of research doesn't seem to have a negative impact on his ability to convince either. For example, though he didn't spend any time making and then detonating bombs beforehand, I thought he was pretty convincing as the explosions-expert in "The Usual Suspects." Wouldn't you agree? Would Benecio have blown up a few buildings first to get the right feel for the part? Probably. But hey, they both get the job done -- how they do it isn't for us to judge, right? We love freely, without exception, right, girls? Right! As long as we aren't in the buildings they practice on, that is.

Another thing that lends credibility to Pollak's lack-of-technique technique is the many many types of characters he has successfully played in his years as an actor. Everything from a lovesick underdog neighbor to a detective to a military lieutenant to an alien named "Spidlock." Not too shabby, don't you think? Also, according to one thing I read, he does great impressions of people. I bet after we went on a date, he could do a fine impression of me, for example. Then it would be like me falling in love with me. Surreal. Very surreal.

Recently, Pollak has been in the movies "The Whole Nine Yards" (with ex-Boyfriends Matthew Perry and Bruce Willis), "Steal This Movie," "The Wedding Planner," and "3000 Miles to Graceland." Next up for him, I'm sorry to say, is "Dr. Dolittle 2," followed by a movie called "Juwanna Mann" which doesn't sound very promising either. However, despite the fact that the delightful and loveable and marvelous and seriously-i-loved-this-guy Walter Matthau recently passed away, I'm sure there's got to be a Grumpiest Old Men movie planned (Grumpy, Grumpier, Grumpiest, you see?). And it will surely be nice to see good ol' Jacob back in the saddle again. I'm hoping that in this one, Daryl Hannah leaves Jacob for a motorcycle commando guy and then Meg Wood (played by moi) moves in next door and becomes his best friend. Then he starts doing impressions of Meg, she falls in love with him/herself, and the movie kind of turns into a cross between "Thelma and Louise" and "Fantasia." No, really! I think we could pull it off! Kev, my agent will be waiting to hear from your agent. As soon as you're ready, my friend.

What the heck am I talking about? Listen, don't pay any attention to me. I'm on medication.

Before we get too carried away with ideas for sequels, though (too late?), those of you hoping for "The Usual Suspects 2" can quit holding your breath. Unless they pull an "Alien 4" on us, there's no way we're gonna see Kevin Pollak reprise his bomber role. Though, arg, he sure did look good in that leather jacket, didn't he?