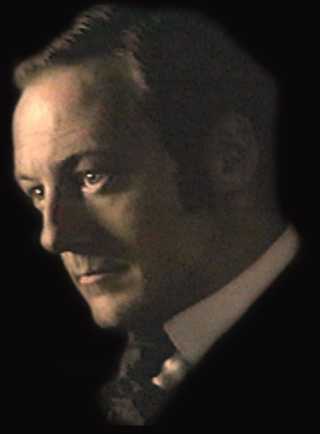 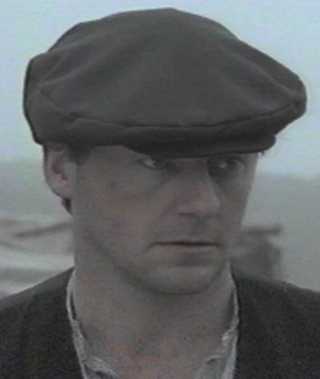 This week's Boyfriend logically should have come after the write-up for Christopher Eccleston, since they were both in the movie "Jude" together. And, also, come to think of it, since they were both in "Cracker" (though not together by that point in the series). As I'm sure you're all no doubt aware by now, however, if there's one thing I pay little attention to, that thing is logic. If there are two things, those things are logic and Leonardo DiCaprio. Three things: logic, Leo, and those FBI warnings on videotapes. Four? Well, you get the picture, right?

One thing I do take notice of, however, is a cute guy with a head of thick curly-ish hair, a sweet smile, an accent, and a whole heap 'a talent. And that, ladies and gents, is why Liam Cunningham is this week's Boyfriend. Out of order, perhaps. Out of line? No way!

My first-ever Liam experience was with my screening of "Jude" a few weeks ago, incidentally. Up until then, I'd never heard of or seen him, despite the fact that I thought I'd watched the entire "Cracker" series forwards and backwards by now. Turns out I was totally wrong about that (so what's new?). Luckily, a mega-Liam fan (who also happens to run the best Liam Cunningham fan site out there -- see list below), read about how big a fan of the series I was and innocently inquired about what I'd thought of the episode "Best Boys."

"Which episode was that?" I asked.

"The one right before the final one when Fitz's son gets kidnapped," she replied.

"The what?!" I shrieked, suddenly realizing I seemed to have missed not one but TWO (at least) episodes of the greatest Robbie Coltrane production ever made. Before I really had a chance to panic, though, she mentioned she had both episodes on tape and would send them to me. And thank god for her, boys and girls. Because if she hadn't done that I'd probably still be trying to track those episodes down, which would mean I wouldn't be here right now telling you why you ought to have a crush on this guy you've probably never heard of yourself. Just stop for a moment and think about the devastation. The havoc. The chaos. The panic in the streets. You see what I mean? When the Boyfriend doesn't show up in a timely manner each week, all hell breaks loose. Well, okay, not really. But still, you'd be mighty bored right now without it, wouldn't you?

Anyway, "Best Boys" turned out to be one of the best "Cracker" episodes out there, despite the fact Christopher Eccleston wasn't in it. And Liam's character is wonderful -- he plays a man, good and kind, who takes in a young homeless boy only to end up falling in love with him. The only real problem with this situation is that the young boy is not Joe NiceGuy. He's a killer. And the coppers are now after the two of them. It ends miserably, as love-murder stories are wont to do. But Liam is such a sweetheart that it is absolutely impossible to be grateful the killing spree ends as it does. The last scene will break your heart, but not before you spend the preceeding two hours wishing Liam Cunningham was YOUR Boyfriend instead and wondering just how many landladies you'd have to kill to get his attention. Wait, stop. That was a joke. I don't honestly think that will be an effective tactic.

Now, love-sick losers are hard not to fall head over heels with, and Liam seems to get type-cast into that very role over and over (lucky for us!). In "Jude," for example, he plays a decent, kind, gracious, and gentle man who falls in love with a woman who doesn't love him back. That ends miserably as well. In the only other thing I've seen him in, "Falling for a Dancer," he actually does end up getting the girl, but not until after hours and hours of painful unrequitedness. He's really quite masterful at playing the pitiful, lost, and lonely. Which, in addition to his sweet face, great shoulders, and totally sexy accent, makes him quite irresistible.

So, the good news, my dear Liam, is that for at least this week, you need suffer no more. You're finally the object of someone else's desire for a change. And, judging from the quantity of e-mail I got after featuring your "Jude" co-star Eccleston, I am certainly not alone in my affections for you and your delightful Irish accent. (However, I just know all you ladies will allow me the luxury of this week alone with Liam, especially since it's a day shorter than most weeks and thus you will have him back that much sooner.)

A little background on our favorite Boyfriend (this week): he was born on June 2, 1961 in Dublin, Ireland. Originally, word has it, he worked as an electrician. Kinda cool. In the mid-80's, however, he came across an ad for acting lessons somewhere and thought it looked like something he might enjoy. So, he decided to hang up his (whatever electricians use) and give it a shot. Only a month or so later, he'd already scored the lead in a local production and it wasn't long before he was touring the United States in another play. Obviously, I'm not the only one who thinks he's a natural!

While it's true Liam Cunningham isn't someone most Americans would know, in his area of the world, he's actually an award-winning performer on both stage and screen. For example, his role in "Best Boys" earned him the Best Actor award from the Royal Television Society, and he has also been nominated for several other awards both for his role as "Mossie" in "Falling for a Dancer" (1999) and for his role in "A Love Divided," which I still haven't seen.

His hobbies include dancing, which he is reportedly really great at, and Formula One racing, which we are hoping he gives up soon (having seen "Heart Like a Wheel" one too many times now). The bad news is, aside from that, there's not really much more out there about Liam. And, if you live in the States, the odds of you being able to catch something he's been in are pretty rare as well (unless you are lucky enough to have totally cool readers like I do!). However, I have to say, the hunt is worth your while, I assure you. I've only seen three things with Liam Cunningham in them and I'm totally and completely hooked. I feel pretty sure that you will respond in much the same manner (i.e. with lots of drool). Give it a try! You won't be disappointed!

I do have some hope-inducing news, however. The first bit is that it looks like Liam was in the television miniseries "Attila," which was on one of those cable channels (TBS?) not too long ago and will surely rerun sometime soon. The other bit of good news is that he's also got three new things due out this year. The first is "Revelation" (also featuring ex-Boyfriend Terrence Stamp), which looks like it's going to be a heavy movie about an ancient religious artifact. To balance that out, his next role is in "Dog Soldiers," a horror movie about werewolves (definitely sounds like the opposite of "heavy" and, worrisomely, may also end up being the opposite of "not-stupid." Yikes.). Finally, Liam will carry an Irish movie called "The Abduction Club," about a group of noblemen who begin kidnapping young girls so they can marry into their fortunes and avoid having to become priests. Whether or not these three movies will actually make it to the American big screen, I can't say. But even if they don't, it's at least good to know Liam Cunningham is out there working, right? Increases our chances that he might one day film a movie right here in our own hometowns. And, you know, like, still need to cast a leading lady and run into, say, ME at the local coffeeshop and realize that I'm PERFECT and so he casts me on the spot and when we get to the kissing scenes, he actually realizes I'm not only right for the film role, but for HIM and so we get married and run off to Ireland together and and and and. . .Um. Stuff like that.

Falling for an Actor (the best LC fan page in the world!)
Liam's IMDB page
A Cracker Fan Page