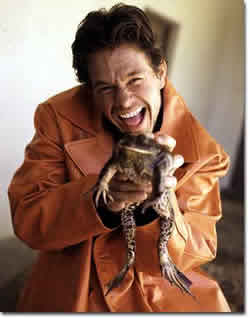 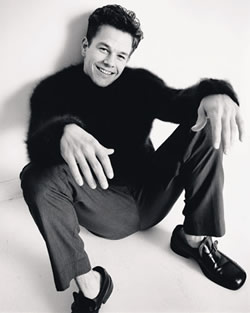 If you'd told me ten or twelve years ago that one day I'd have a major crush on this week's Boyfriend, I would have snorted and rolled my eyes. Why? First because I was kind of rude like that when I was sixteen. And second, because, fwah!, Marky Mark? As IF!

In fact, I vividly remember snorting and rolling my eyes when I heard Marky Mark was going to give up his career as a white rapper (fwah, again!) to become Mark Wahlberg, actor extraordinaire. I foolishly continued to feel this disdain for him until I stumbled into one of his movies a few years ago -- the Gulf War movie "Three Kings." It took me awhile, actually, to realize that that totally cute guy standing next to George Clooney was, no, can't be, is that MARKY MARK?!

'Twas. And I'll admit, if I'd actually verbalized that snort and eye roll from before, I would've been eating my words. Because not only does Mark Wahlberg look great with his pants on (remember those Calvin Klein ads from the early 1990's?), but, I'll be damned! The man can act!

Later roles only reinforced this. And, in all truth, I can't think of a movie of his I've seen that hasn't impressed me in some way. Though, in reviewing his film list on the IMDB, I realized I've actually only seen five of his films, which isn't many. However, this works out well for us because since the number is so low, I can talk a little bit about each of them here (and these are in the order they were made, not the order I saw them in).

The first one is a sweet little comedy called "Renaissance Man" directed by Penny Marshall and starring future Boyfriend Danny DeVito. It's another of those movies about a teacher who takes over a class of rowdies and turns them into something good. Not a "film" by any means, but also not a bad rental for a rainy Sunday afternoon. This was Mark's first major film and he's definitely a pleasure to watch in it.

Next came the very sexy but VERY freaky thriller "Fear," which I actually just saw for the first time last weekend. In it, Mark plays David McCall, a wolf in sheep's clothing who seduces young Reese Witherspoon and then becomes just totally terrifyingly crazed when she tries to break up with him. I was sufficiently thrilled by this movie, that's for sure, and not just because this week's Boyfriend takes his shirt off a lot. We ALSO get to see lots of ex-Boyfriend William Petersen, which is a very, very good thing if you're me. In fact, though I rented it specifically to see Mark Wahlberg, I will confess to a fair amount of distractedness whenever Gil Grissom walked across the screen. Whoooowee. Yum.

Alas, I digress. Third up for Marky Mark was "Traveller," a WONDERFUL little movie co-starring Julianna Margulies and Bill Paxton. Bill and Mark play con artists who get involved in a big scheme that ends up going all wrong, as big schemes in con artist movies are wont to do. I was surprised by how great this movie was -- I'd never heard anything about it when I first saw it, which is sometimes a very bad sign. But Mark is really terrific as the overly enthusiastic rookie to Bill Paxton's professional and the plot is fast-paced and thoroughly exciting. I give it two thumbs up, even though I'm sure that expression is copyrighted by Ebert and Roeper and I'll probably get sued.

Okay, fourth is "Boogie Nights," which I also just saw for the first time over the weekend. This was the movie that inspired me to make Marky Mark a Boyfriend, actually. I had rented it to see last week's Beau, Philip Seymour Hoffman, but was completely taken in by Mark's "Dirk Diggler" instead. Not because he was nekkid a lot. Not because he looked sexy in that 70's haircut (yikes!). But because I was REALLY impressed by Mark's acting in this film. He was so painfully angry and sad and desperate for something meaningful. I went into this film thinking it was a comedy -- but it's actually a tragedy. The laughs stop coming about half-way through when you realize just how completely SAD it all is. This is a great movie, though not one to watch with your mom.

And last, but not least, comes the movie I referred to earlier, "Three Kings," co-starring future Boyfriends George Clooney and Ice Cube (I LOVE Ice Cube!). This was the first Mark Wahlberg movie I ever saw, even though it was chronologically the last in this list (the most recently made, I mean). It's an extremely entertaining movie about some soldiers in the Gulf War who decide to try to track down some treasure they've heard about and get a little sidetracked by their morality. Mark is great -- he's just honestly and truly a VERY good actor! And while he essentially plays the same character in all five of these movies -- the strong, sexy, totally insecure guy -- he is remarkably talented at giving each role it's own wholly believable twist.

Anyway, there are three other major movies of Mark's that I've missed. One is "Perfect Storm," which I've hesitated to rent because I read the book and know how it ends (unhappily). The other two are ones I'm just not interested in (though perhaps you guys will talk me out of that like you sometimes do): "Rock Star" and "Planet of the Apes." Coming up next for him is a remake of "The Truth About Charlie" directed by Jonathan Demme and co-starring ex-Boyfriend Tim Robbins. "Charlie" is a mystery/thriller about a woman who goes to divorce her husband in Paris, only to discover he's dead and all his money is missing. She meets a mysterious man (played by Mark) who tells her all the money belonged to him and he wants it back. He's convinced she has it -- she's convinced he's lying about everything. And everybody else keeps turning up dead. Could be good. Love Tim Robbins. Love Mark Wahlberg. Love a good mystery!

Okay, now it's time for our little biography and I have to admit, I debated not including this portion this week, simply because it's a bit on the ugly side. Usually I love finding out about the history of each Boyfriend, but sometimes that history is so unsettling, it's kept me from being able to feature the Boy at all (Tom Selleck is in the NRA! Ack!). Mark Wahlberg's past is definitely unsettling, but I've decided to give him the benefit of the doubt for two reasons. First, the worst part of it is all rumor, which he's vehemently denied for years. And second, the other bad stuff is stuff he has clearly put behind him. I can respect that. We'll see if you guys can.

Mark Robert Michael Wahlberg was born on June 5, 1971 in Dorchester, Massachusetts. He had 7 brothers and sisters and the large family lived in a poor neighborhood, crammed into a tiny three-bedroom house. Mark's parents divorced when he was 11 and three years later, he dropped out of school to pursue a life of petty crime and drugs. His mother had become totally self-absorbed by this point and pretty much completely neglected all her children, so it's a little hard to blame Mark for this foolish decision, made at age 14.

Unfortunately, as the laundromat in Newport, Rhode Island proclaims, "grime doesn't pay," and Mark was arrested several times and finally jailed for assault after attacking two Vietnamese men he was trying to rob. He was sentenced to 50 days in prison and accused of, and this is the really ugly part I referred to earlier, being a racist bastard.

When Mark got out of jail, he swore he'd change his ways. He moved back in with his family and let his brother Donnie convince him to join Donnie's band, "The New Kids on the Block." (Eek!) But Mark didn't last long with the group -- they were just too sugary for him. Donnie, good bro that he was, was concerned Mark would slip back into crime without a focus, though, and managed to talk a record company into giving him a solo contract. And thus was born "Marky Mark and the Funky Bunch."

Marky Mark did pretty well, for a white rapper. He pulled his pants down on stage a lot, which kept the 13-year-old girls interested, and a few of the band's songs were catchy enough to hit the Top 40. Mark also signed a modeling contract with Calvin Klein and was appearing sans-pants on posters with Kate Moss being displayed all over the world. The only problem? His bad-boy image was a favorite topic of the tabloids and he made a series of bad moves that only fed that fire. On a British talk show, he said nothing when fellow rapper Shabba Ranks said gays ought to be crucified -- and many took his silence for consent. He also got into a lot of fights -- most notably with Madonna -- and was brought up on charges for assault again when he hit a black security guard. This time, he was ordered to appear in a series of anti-bias advertisements instead of sent to jail. But his reputation was seriously damaged nonetheless.

It was at this point that he decided being a rapper just wasn't for him anymore. He dropped the Marky Mark moniker and headed to Hollywood to become a different kind of star. And, as far as I know, the change of venue did the trick. Since he's been acting, I haven't seen anything ugly about him in the news and he's denied being a rascist for years. So, I decided to give him the benefit of the doubt. And can you really blame me? Did you LOOK at those BICEPS up there?! No, seriously though, it really looks like Mark Wahlberg has managed to pull himself out of the gutter he dropped himself into at age 14. And I respect that. A lot. And when you add to that talent and a smile that makes my knees all wobbly, what you have is a Boyfriend of the Week. It doesn't get any more plain and simple than that.

Though I won't lie and say the biceps didn't have anything to do with it. A girl's gotta have her standards, after all. Ahem.

Anyway, he's good, folks. He's got just enough of everything you need to make it big in Hollywood -- humility, looks, talent, and charm (ooo, charm especially). I have no doubts that Mark Wahlberg is going to continue to make great pictures. Though, in all honestly, I could do without the full-frontal nudity next time. No offense.

Please note: Meg is on vacation next week. The next Boyfriend write-up will debut on Tuesday, February 26th. Rock on, ladies and gentlemen!