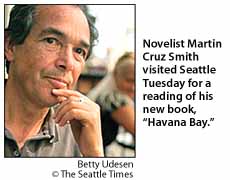 This week's Boyfriend is a prototype -- he's the first author I've ever featured on this page. While he's not my Favorite Author of All Time (TM), he's certainly much cuter than my FAAT (William Faulkner), AND he has the added bonus of still being alive. That's gotta count for something.

Martin Cruz Smith is the author of a small series of books (among other things) featuring a very attractive Russian policeman named Arkady Renko. Now, it's certainly not slipping by my conscious Self that part of my attraction to Smith is grounded in an attraction to his character Arkady. But it makes a lot of sense that it would -- Arkady comes across as so real, it is easy to imagine that he and Martin have some qualities in common. It is, after all, very difficult to write about something you don't know. Likewise, it's not easy to avoid projecting pieces of yourself onto the screens of your characters. Arkady is a Russian and Smith is a Native American, but I get the impression that the character of the character is not too far removed from the character of the author.

And even if that's not true, Smith is still a dreamboat with a talent for writing. That's enough for me.

The first of the Renko books was made into a movie starring William Hurt (Gorky Park). While I'm not a huge fan of William Hurt, I will admit he made a good stoic Russian cop. He does stoic very very well. Ever since I saw Gorky Park, I've had a hard time picturing Arkady as looking like anyone else, really. But in Smith's latest, Havana Bay, I got a good look at the author himself on the book jacket and immediatly swapped images in my head. Marty isn't a pasty Russian, but picturing him as Arkady wasn't really a stretch for me. It's hard to condemn a man for NOT looking like a pasty Russian, after all, and the combination of Smith's face and Arkady's Russian-ness was one of the things that made the book truly pleasurable.

You guys knew I had a Thing for Russians, right? Russians and Canadians. Sounds weird at first, but keep in mind that there are theories the Russians started in Canada and crossed over to Asia via Alaska (back when there was a land connection instead of the Bering Strait). Really, it makes perfect sense. If I squint, I can even picture Martin-as-Arkady-as-a-Mountie right now. Can't you?

Nevertheless, the man can write. The Renko series is small (four novels all together), but I have read all but the fourth several times apiece and loved them every time (the fourth just came out so I've only read it once). Check your library! Check your local used-bookstore! You will not be disappointed!

MacGyver Factor Score: 95.6%. Points off for making me wait sooooo long between novels. It's good because it means he takes his time and really works on them. But oh! The torturous wait!

Addendum: I haven't ever read anything he's written besides the Arkady Renko books, but I plan to seek out a few of the others that look promising. Keep an eye on my Books page if you want to see how I like them.