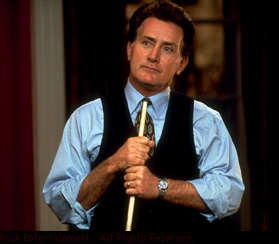 I have timed this week's Boyfriend perfectly so it would coincide with the Presidential Election (vote Tuesday! And not for Dubya!). Why? Because in a perfect world, it would be Josiah Bartlett for President this week instead of all the other yahoos who are running. No more cheesy campaign promises and big fat lies. Just Josiah and his incredibly adorable and savvy White House staffers. All the way to the top. Hurrah!

However, since the world is not now and never has been perfect, I am instead electing Josiah Bartlett as President of the Boyfriend Nation. Quite possibly the most prestigious position one can attain (one who isn't MacGyver, that is). Unfortunately, it's for one week only because we really believe in term limits here at the Boyfriend Nation. (Well, except for last week, that is. But I've been really good up until then!)

Now, I'd say a good 75% of you are behind me in my rallying cry for JB. And the other 25% are scratching their heads and muttering, "Who's Josiah Bartlett and why does he look just like Martin Sheen?" He does, doesn't he? Want to know why? Because Josiah Bartlett IS Martin Sheen. Ta-da! But I can't fault you 25% too much for not knowing that. I was one of you myself, and not too long ago. In fact, it was only about four weeks ago, before I realized that "The West Wing" is one of the best television shows EVER.

Embarrassingly enough, the truth is people have actually been telling me that for over a year now. But for some reason, I just couldn't get too excited about a show set in the White House. I think it had a lot to do with my political-related phobias. I'm afraid of people who don't take politics seriously. But I'm also afraid of people who take politics TOO seriously. There's a balance in there somewhere, and it's the only kind of politics that makes me feel comfy. So, typically I avoid all politically-related anythings unless they are of known quantity. Known and approved by the Meg "It's Hard to Be Polite When You're Bitching About Politics" Etiquette Board. I also don't like arguing about politics and I think bringing up one's personal political beliefs is something that should be done carefully and only in certain environments. People who love to argue about politics and therefore often attempt to drag the unwilling around them into debates drive me bonkers. Usually because they tend to be wrong about 90% of the things they say. And I generally don't like it when they're right either. Or when they're conservatives. Or both. Especially both. Though that's a pretty rare occurrance.

Anyway, finally, after about forty-billion emails and even some personal phone calls, I broke down and watched my first episode of "The West Wing" about three weeks ago. It was the episode in which the Prez gave that magnificent speech to the Dr. Laura-Lookalike. I LOVED that speech. In fact, I got so carried away with that speech that when he was done I shouted, "Yeah! Take THAT Dr. Laura!" and started to applaud. In my living room. Alone.

I love television that makes you feel all interactive 'n stuff.

The next two episodes I saw both involved the new blonde Republican lady and were a little excessively cheesy in some places (like when she said to her friends, "They are PATRIOTS!") (blech). But, while I eschew copious amounts of cheese as a general rule, I will admit that I kinda liked it. It's nice to see a bunch of politicos get along, even if it is fiction. And wholly unbelieveable at that.

I also love the supporting characters. They are funny and charming and real (and some of them are also Rob Lowe, which is nice -- he'll be showing up here eventually). But even more than I love the writing and the setting and the supporting cast, I love the President. He walks soft but he carries a big stick, which is the kind of behavior I approve of. At least, it beats the alternative, which is to make a lot of noise but never get anything done. And even though I refused to admit it when Al Gore smooched Tipper on TV, I really like it when big shot untouchables show off their sensitive sides. I like that President Bartlet spends a great deal of his time trying to figure out how to get his wife alone in a room long enough to get some good smooching in. And I like that he seems to be involved emotionally in a lot of the things he does as Prez (like, when the African leader came to ask for help with the AIDS crisis in his country). Even though he doesn't allow those emotions to dictate his responses (which is good), it's nice to know the President feels something personally when he makes important decisions.

And, yes, I know this is all made-up stuff and the real President isn't anything like the tv President and blahbady blahbady blah. But that's exactly why I'm writing in Josiah Bartlet on November 7th. It's time for change, people! The real politicians just aren't getting the job done anymore. It's time to elect someone tall, dark, and handsome (Al Gore does not count!). Someone people pay attention to and respect. Someone honorable and intelligent. i.e. someone completely made up!

Okay, not really. But you know what I mean.

I will also admit that some of my hesitancy regarding "The West Wing" had to do with the fact it starred Martin Sheen. Sure, he played Kennedy once (I only know that from watching "The Goonies" 80-bazillion times, by the way, and if you know what I'm talking about, you are too cool to be true), but I had a hard time picturing the guy from "Apocalypse Now" as the leader of my country. Remember that scene in the beginning where he's higher than a kite and is thrashing around in his room? I just kept picturing that scene, only set in the Oval Office. Try it yourself. You see what I mean? Kind of hard to comprehend.

So, now you understand where I was coming from. However, as usual, I was completely WRONG. Because Martin Sheen makes a GREAT president. Even his voice is presidential. And even though he's old enough to be my grandpappy, I can't help but be totally and completely attracted to him. I'm the Monica Lewinsky to his President Josiah Bartlet. And I'm not even ashamed to admit it.

Now, you probably already know everything about Martin Sheen you ever wanted to know, namely that he is the father of Charlie Sheen and Emilio Estevez, two actors we were ALL madly in love with about 10 years ago (oh stop -- you were too! Just who do you think you're fooling?). But humor me, it's my job to educate you. Martin Sheen was actually born Ramon Estevez in Dayton, Ohio. Interesting name change, though I have to say I really really find the name "Ramon" attractive. It just rolls off the tongue. Rrrrrramon. I love it. But Marty's okay, too, I guess. Anyway, right after of high school (when he purposely flunked his college board exams so he wouldn't have to pursue the degree in Education his father wanted him to get), Marty moved to New York to pursue his dream career.

You thought I was going to say "pumping gas" or something, right? C'mon! I've already used that joke!

His big break came in 1964, when he scored a lead part in the play, "The Subject Was Roses," which ran on Broadway and was eventually made into a movie (also featuring Marty, who was later nominated for a Golden Globe award for his role). His feature film debut was in 1967 in a movie called "The Incident," which I have never seen but which has a promising title. Just vague enough to be intriguing. Not so vague you are totally thrown by the actual plot when you find out what it is. His earliest critical success in film was in Terrence Malick's "Badlands," in which Marty played a kid on a killing spree, and for which he was named Best Actor at the San Sebastian Film Festival. Punk on a killing spree. President. Punk on a killing spree. President. See, it IS weird.

Of course, probably the film that truly MADE Martin Sheen is "Apocalypse Now." There's a really great documentary out there about the making of Apocalypse Now (I think it's called "Hearts of Darkness") and I urge you all to rent it if you are fans of the film. It mainly focuses on the physical and mental stress the making of the film had on everyone involved (including Martin, who actually ended up having a heart attack on the set) which makes the actual movie seem a lot more realistic and intense.

Anyway, after that (and probably before that, really), when you said, "Martin Sheen," people knew who you were talking about. It's pretty well accepted that Marty is one of the most versatile and talented actors there ever was. Which is why I never should've doubted for a moment that he'd kick arse as Prez. I'm a fool. I've said it before, and I'll say it again.

He's not just an actor, either. He's also done a little directing. At least one movie that I know of ("Cadence," not a huge critical success) and at least one television special ("Babies Having Babies" -- I don't know anything about that, though). And in 1998, he won the presitigious Lifetime Achievement Award from the Imagen Foundation, an organization that honors positive portrayals of Latinos in film, tv, and other media formats. That is really hip, my friends.

Now, not only does Marty have a bunch of kids (two others besides Emilio and Charlie), but he's also been married to the same woman for about a bazillion years. Or at least 30 anyway. Bravo, Martin! That's truly admirable for someone who's been famous for practically his entire life. I won't try to break you guys up or anything, but I'd be happy to get a presidential smooch sometime. A purely platonic one, mind you. Not a Monica Lewinsky one. Just so you know.

So, loyal readers, the important point I want you to take away from this week's Presidential write-up is this: "The West Wing" rocks. Not only is it funny and full of good looking Boys, but it's also clever and intelligent. Rare in today's television, I assure you. Especially in today's television that manages to last longer than a few episodes on the air (I already miss "Deadline," those creeps). So, watch it. Love it. Hold onto it. And for pete's sake, don't let them cancel it!