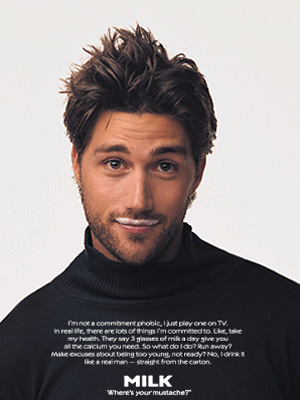 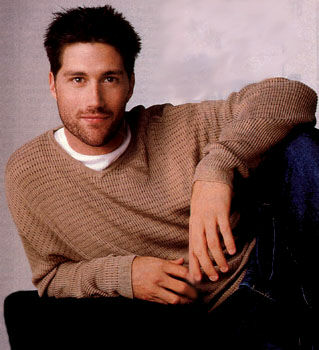 Okay, hands in the air if you remember that old show "Party of Five." 'Kay, good, that's a lot of hands. Now, hands down if you hated that show, keep 'em up if you loved it. Is my hand the only one still up? If so, you guys stink. And I blame YOU for the fact Po5 was canceled well before I was ready to let it go.

Before you start to fear that I'm not as cool as you once suspected, let me tell you WHY I loved "Party of Five" so very, very much. I assure you, it had nothing to do with Jennifer Love Hewitt and her burgeoning pop music career. Nope, I loved it because it was outrageously cheesy and silly and fun. The last year it was on the air, as a matter of fact, was its finest season, in my opinion. My sister had just moved to California and didn't have a TV, so my job that year was to write her lengthy descriptions of the plots each week. The letters started out kind of boring and short, but then I realized what a GOLDMINE "Party of Five" was. I mean, if you think these write-ups are funny, you should've seen some of my episode breakdowns. Once I realized just how incredibly funny that show really was, in a soap-operatic-Beverly-Hills-90210 kinda way, it became a whole new source of pleasure for me. Man, I really wish I'd kept copies of those letters. I'd love to read them now. Especially since I'm sure I had some hilarious things to say about Charlie, the oldest brother on the show. Played by this week's Boyfriend, Matthew Fox. Who better to steal jokes from than your very own self?

Now, for those of you who loved "Party of Five" because it was also relatively intelligent and honest and also pretty well-crafted, I want to tell you this: I thoroughly agree. Despite it's borderline silly "deepness," it was also a pretty interesting look at family dynamics between siblings. As the youngest of three, I could relate a lot to the yelling, fighting, crying, shouts about unfairness, and also the intense bond between the characters. Sure, there was a lot of cheese. More cheese, in fact, than a Chicago deep-dish style pizza. With extra cheese! And there was also, even worse, a lot of Jennifer Love Hewitt. I shudder to think. But underneath all that ick, there was also Scott Wolf (Bailey -- so cute!) and, even better, there was a lot of Matthew Fox.

Matthew as Charlie was a great guy. A little lost, a little overwhelmed, but clearly a strong, smart, decent soul trying to do good in a world full of bad (oh no, not THAT again!). Also, he had really cute stubble, and quite possibly the greatest crinkly-eyed smile the world has ever seen. As for the cheesiness, Matthew himself has publicly bemoaned the Po5 dairy factor, even while at the same time remaining a faithful member of the clan for however-many years the show was on. But he's also the first one to admit that after the show ended, he knew he'd better take a break from TV work lest he get typecast as the "scruffy, cute, commitmentphobic" type of male he played (oh so well) on the show.

For this reason, he put off taking any other jobs until now. His newest show, "Haunted," debuted last week and is really great (in my opinion). And this time, Matthew is NOT playing a scruffy, cute, commimentphobe. Because this time, he's shaving before every single episode.

No, but really, this time he's playing private investigator Frank Taylor, whose life is changed forever when his son is kidnapped right from his own house. His son has been missing for two years when the show begins, and we see the effects that kind of loss has on a family right away. Frank and his wife have divorced and are wracked with guilt, each blaming both themselves and their partner for the oversight that cost them their child. Frank has dedicated his life to finding lost children. Always hoping deep down that one of the kids he'll find one day will be his own.

In the pilot episode, Frank was stabbed by a bad guy and was dead for a few minutes before being revived at the hospital. During that time, he "crossed over," as John Edward would say, and while on the other side, he saw a few people -- his son Kevin (who he wasn't even sure was actually dead) and the bad guy he killed after being stabbed. When he was revived, apparently his connection to the "other side" stayed somewhat intact because now he's seeing ghosts. Ghosts can hurt him. Ghosts can help him. And it's up to him to figure out just who is who and what their motivations are.

So far, pretty good. Though I do have one criticism to make already. Why the HECK is it so dark everywhere Frank Taylor goes? Sure, he's in Seattle. But, like, we DO have LAMPS here, for cryin' out loud. We are especially known for having lamps in our hospitals and autopsy rooms. In fact, we're FAMOUS for lamp proliferation in our hospitals. They're everywhere! They're taking over! It's not dark at ALL in there, actually. Lamps. Everywhere. I personally own about 8 of them, as a matter of fact. And that doesn't count all the overhead lights that came free with my apartment.

Pfft. Dark in the ER. Dark in the autopsy theater. Dark every single place Frank Taylor goes. I mean, in some ways it might be a good thing. If everybody thinks Seattle is lamp-less, maybe fewer people will move here ("Honey, we can't go to SEATTLE! They don't allow lamps there!"). But honestly, the show is already asking us to believe that ghosts are haunting Frank Taylor. They're also asking us to believe there's a shortage of lightbulbs as well?

Nevermind. Nevermind. Nevermind. Forget I brought it up. It's not important. What's important is the fact that so far, it's a pretty entertaining show. Good plots, good twists, and good characters. And also, good LOOKIN'. Because if ever a man were aptly named, it's Matthew FOX. Don't tell him I said that though. I bet he really hates that joke.

Okay, let's go over the M. Fox stats. He was born on July 14, 1966 in Crowheart, Wyoming and spent most of his childhood there on the family ranch. Wyoming is an outdoorsy kinda place, so it's no surprise Matthew was into outdoorsy kinda things, especially sports. By the time he hit high school, as a matter of fact, Matthew was one of the best football players in his school. From there, he spent a year at Deerfield Academy in Massachusetts and then was offered (and took) a football scholarship to Columbia University, where he played wide-receiver for the Lions and graduated four years later with a B.A.

While in school, he met his future wife, an Italian woman visiting New York for a time. When he graduated, the two of them moved back to Italy to pursue jobs in modeling. They were married in 1992 back in Crowheart, party of 120.

Matthew's foray into modeling eventually led to a few small acting roles in commercials -- a Clearasil ad and one for Dr. Pepper. He quickly got himself an agent when he realized he had a knack for drama and was soon cast in the TV series "Freshman Dorm," which didn't survive its first season. Next came a few television movie roles, most notably his award-winning performance in the after-school special "Behind the Mask" co-starring Donald Sutherland, and then a role on the series "Wings." In 1994, he got his big break -- "Party of Five" -- and before he knew what had happened, critics were loving him, women were drooling on him, and People Magazine was naming him one of the world's "50 Most Beautiful People."

Not too bad for a small-town Wyoming hick, huh?

And now this -- "Haunted" -- which has a lot of promise, in my opinion (I'm hoping as the show gets more and more successful, someone will thoughtfully donate some lamps to the set. Or at least a case of candles. Flashlights?). And while, sure, it seems like there are about half a dozen shows already on this season about lost men looking for lost children, one of them even set in Seattle too ("John Doe"), only this one has scary ghost people, comes on after "Buffy the Vampire Slayer" (ah, I love Tuesdays) and stars our favorite Salinger kid. So, tune in! See what you think! And, for the love 'a Pete, try not to let THIS one get cancelled, okay?