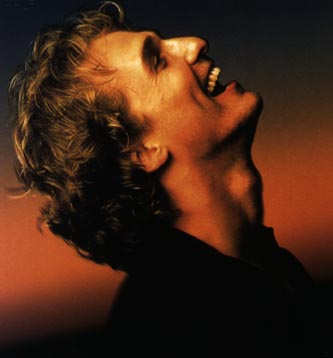 This week's Boyfriend is sort of an oldie but goodie, though I'm sure that's probably not the most flattering way to say what I mean. Matthew McConaughey definitely isn't old (in fact, he's a month younger than my new husband!). What's old is my consideration of him. Or, more simply and accurately put, my horrendously overpowering crush on him.

I have actually tried long and hard NOT to like Matthew McConaughey. And not just because I can never spell his name correctly without looking it up first (though, I will admit that drives me crazy). There's just something about him that seems a little on the too-cocky side. At least, that's what I kept thinking every time I started to wonder if I should make him a Boyfriend. The problem is, I have completely failed to find ANY evidence of cockiness on film. So, was it something about him I've seen elsewhere? An interview? A smirky photograph? I kept lookin', and I kept coming up with nothing to back myself up. I even read numerous accounts of his interactions with drooling fans -- some of whom he hugged and called "sweetheart," for pete's sake.

So, I gave up. I just gave up on trying not to like him anymore. And now I can tell you with 100% confidence that I think Matthew McC. is really really cool. He's not just damned good looking (okay, okay, remember that scene in "A Time To Kill" when he's on the floor with his wife and he pushes himself up with one arm? And his bicep flexes? I have to rewind that scene 2-3 times when I watch that movie. I can't help it. It's just sooooo. . . argh!), he's also, in my humble opinion, a pretty talented actor. I will confess here that I certainly haven't seen all his movies, but it's still true that I've seen a fair number. And I can't think of a single one in which I didn't find him wholly believable (and wholly watchable) as his character. Now, this is not something I can say about all the other Boyfriends, my friends. Not even close, as a matter of fact (paying attention, Treat Williams?).

Okay, but before all you hip anti-Hollywood people start swamping me with e-mail telling me I'm stupid, let me repeat for the record that I haven't seen ALL his movies. And also, there is another factor at play here -- I also can't think of a single movie of his I have seen in which he's played a character that didn't seem just like all the other characters he's ever played. For evidence of this, I will now present you with a detailed chart:

You see what I mean? Now, I'm sure -- I AM SURE -- that there are some other movies that I haven't seen in which Matt plays a bad guy. Or a mean guy. Or a guy with the values of a null set (math analogy). But, look, if they're out there, I haven't seen 'em. Matt specializes in men with good solid hearts and lofty ideals that oftentimes land them in trouble (I forgot to list "Amistad" up there, but it's no exception to this). And I suspect that the reason he's typecast into these types of roles is because he IS a man with a good solid heart who occasionally gets into trouble for trying to have too much of a good time (remember when he was arrested for playing the bongos nekkid?). I know that last week I said that girls lust after bad boys (in fact, I just had a dream about Lex Luthor again two nights ago), but I also said that we MARRY good ones. And Matthew McC is definitely a marriable kind of man.

While we're on the subject of marriage, by the way, let me state for the record (I'm doing that a lot today) that while I did just get married, this in no way should influence any Boyfriend's decision regarding whether to call me up or not. I got permission from my husband WELL in advance of the wedding that should a Boyfriend ever want to take me out for a night on the town, they are welcome to. And they are even allowed to smooch me. Tenderly. On the forehead.

And if anything else should happen, we simply will not report the details. Ya follow?

Whoops, sorry about the marriage stuff. Let's keep our minds focused on what's TRULY important here -- Matthew McC's totally incredible eyes (blue), hair (messy), smile (crooked), accent (sleepy), and body (ouch!). And now let's hear a little biographical information about him (so we can pretend to be interested in more than just that feeling we get every time he flexes an arm or opens his mouth): Matthew David McConaughey was born November 4, 1969, in the small town of Uvalde, Texas. He's the baby in the family, with two older brothers (Mike (AKA Rooster) and Patrick). When Matty was still quite young, his family moved from Uvalde to Longview, where his dad worked in the oil business (after playing pro football for the Green Bay Packers, which tells us which side of the family Matthew got those incredible shoulders from, no?). Matt graduated from high school in 1988 and then spent a year in Australia working for a law firm. He later went on to study film direction at the University of Texas (Austin) and graduated with his BA in 1993.

In 1992, the director of "Dazed and Confused" saw Matthew in a commercial and hired him to play the role of the aging stoner (a role that Matthew loved so much he later used one of its lines to name his production company, "j.k. livin" (for "just keep livin'")). Soon, Matty's sweet Southern charm caught the eyes of other Hollywood big wigs and he was cast in "Texas Chainsaw Massacre : The Next Generation" (which I am going to HAVE to rent someday soon) and "Boys on the Side" with Drew Barrymore. In 1996, he made two wildly successful moves ("Lone Star" and "A Time To Kill") and his career has been nuts pretty much ever since.

A little trivia: Matthew is 5' 11" tall (woo!). He loves to play golf and recently quit chewing tobacco (woo, again!). He has a dog named Miss Hud, drives a black BMW and is currently living in Austin, Texas. His favorite book is reportedly "The Greatest Salesman in the World" by Og Mandino, a book that is actually about being an effective salesman in the business world. Which in some ways makes it an appropriate choice for a famous actor, I suppose, though it's a bit odd. I guess I was hoping for something by Faulkner, perhaps? Being Southern and all? But anyway, he's currently single (marital status wise -- I don't know if he's dating anybody) (besides me this week, I mean) and his "odd quirk" according to one fan site is that he "assigns nicknames" to things. A habit that can be extremely charming, especially if the nickname assigned to you is "Sweetheart" and this assignment occurs while Matthew is cradling your head in his arms and smothering your cheek with soft kisses. Whoops -- sorry about that -- got a little distracted there for a second. Ahem.

Okay, up next on the big screen for Matthew are four new movies, starting with "13 Conversations About One Thing," an Alan Arkin movie about several sets of people, all of whom encounter something in life that leads them to question that age-old question: what is happiness and how do I git me some? After that, comes "Reign of Fire," in which Matthew plays a character named "Denton Van Zan 'Dragon Slayer.'" This appears to be a serious movie about a brood of fire-breathing dragons who emerge from underground and begin to establish dominance over the earth. I find it particularly frightening that this is NOT classified as a comedy, though it might be a good sign that it co-stars Christian Bale.

After that comes a drama about a couple who are forced to make changes in their relationship when the factory they both work at closes down -- "Dexterity," due out in 2002. And last, a pretty decent sounding thriller called "Frailty" in which Matthew plays Fenton Meeks, a man who comes forward to the FBI to report his suspicions about his brother, whom he fears is the serial killer calling himself "God's Hands" (see link below if you want to see the trailer).

Honestly, though, Matthew can pretty much do just about anything and be guaranteed a victory -- there are enough ladies out there like me who think he's an absolute peach and we'll keep going to his movies no matter how bad the reviews are ("The Wedding Planner" -- yeesh!). And, to be honest, I think in this case, it has a lot less to do with his swanky good looks and his swoon-inducing voice than it has for some of the other Boyfriends I've featured. I just think Matthew McConaughey is a really big sweetie and I wish him all the success in the world. It would be fun to be 70 years old and still see him show up in the pictures. Especially if he manages to age as well as ex-Boyfriend Harrison Ford. And to that end, I also wish him great success with his attempts to give up the chewing tobacky. Mouth cancer never made anybody look handsome at 70.

Matt's IMDB page
The Official "Frailty" Site
An Unofficial Fan Page
The M.McC. Web Site Back to my Homepage.