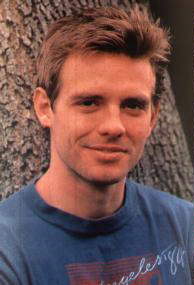 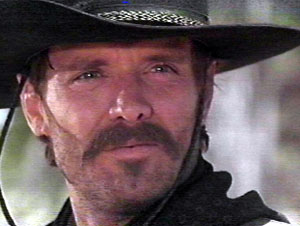 This week's Boyfriend is one I've had on my back-up list for quite awhile but just never got around to for some reason. Don't know why, since I've been heavily in crush with him for at least a decade now. Michael Biehn is not only gorgeous and cool, but he's also in one of my all-time favorite Westerns, Tombstone.

Now, I'm not sure I've gotten into how much I love westerns yet on this site, so now is maybe not a bad time for it. Westerns are terrific. Even the bad ones are a ton of fun. They're predictable, cheesy, and can be pretty chauvanist, too, but they're still a heck of a good time. I love the shoot 'em up scenes and the town sheriffs and the horses and the dust. I love the bad guys and the good guys and the guys who are sort of in between. I love Clint Eastwood, Sam Elliot, Kirk Douglas, annnnnd Michael Biehn, who played the mean-tempered, Latin-speaking bad guy in Tombstone, Johnny Ringo. He was unshaven, gritty, and a total bastard with very little regard for human life. But there's just something really sexy about bad cowboys. At least, there is when they're up there on the big screen (in real life, I imagine all that dirty sweat probably smelled pretty awful).

Tombstone was just the icing on my Michael Biehn cake, though. The first time I (and all the rest of you too, admit it) fell for him was when I saw him in The Terminator. He played the hero, which is even better than playing the bad guy, and he was romantic and sensitive and really damn cute. The more I've seen of Biehn, the more impressed I am with his talent for acting, too. He's actually pretty good! I mean, if you can do sensitive hero AND nasty evil bad guy, it says a lot about your theatrical abilities. Especially if you play them so convincingly. Plus, Michael Biehn wrote his fan club a letter thanking them for their support. Noticing a recent trend here in Boyfriend selection? I'm growing more and more appreciative of the ones WHO WRITE.

Anyway, Mikey's been in a few other movies I've enjoyed, though I wouldn't call any of them "films" -- Grease (bet you forgot he was in that, huh?), The Rock, The Abyss, Asteroid (loved it!), Aliens, etc. He's always pretty fun to watch, even when the movie is a complete dog (e.g. Navy Seals). So, hit the video store, kiddies. Start with Tombstone, if you haven't seen it. We simply will have nothing further to discuss until you've caught up.

MacGyver Factor Score: 95.8%. Points off for hanging out too long on television's "The Magnificent Seven," which is pretty unwatchable. It says a LOT that it's a western and I can't sit through it. Don't believe me? Listen to this: I paid full price for Kevin Costner's "Wyatt Earp" and was one of the few people who didn't walk out before it was over. Michael! It's time to move on to greener pastures! Make another space disaster film! Asteroid II!