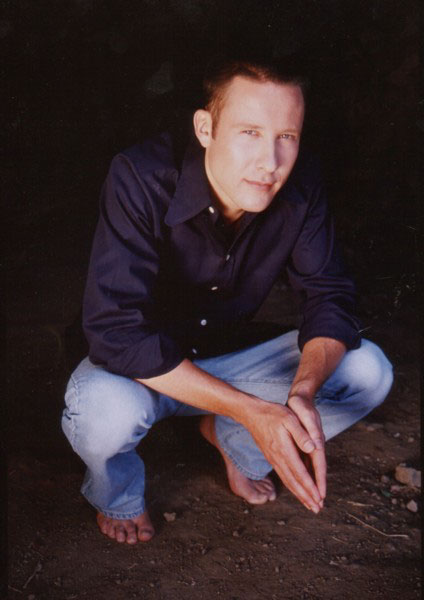 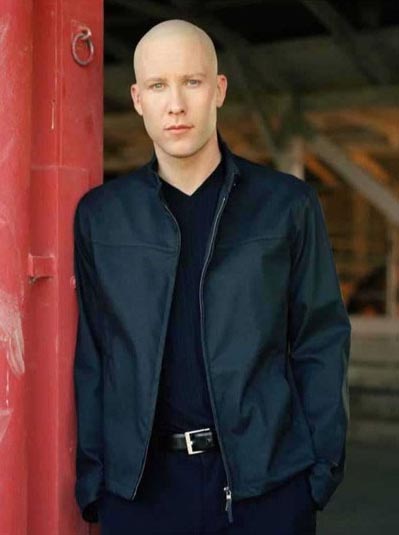 Sorry about the week-long delay, but since it's both the holiday AND the cold-and-flu season, I'm sure the vast majority of you understood completely why I was unable to bring part two of the Superman series to you in a timely manner. I was feeling about as fast as a speeding banana slug last week, more power than a locomotive (derailed), and able to leap tall buildings only with the assistance of a rocket engine and a HELL of a lot of Nyquil. You get the picture. And what's an extra week among friends?

Anyway, as promised, this week's Boyfriend is the latest in a long line of Lex Luthor's -- Michael Rosenbaum, co-starring with last week's beau Tom Welling on the great new WB show "Smallville"!

It was actually very hard for me to decide which of these two guys would get to be the Boyfriend first. Ultimately, I went for good over evil, for karma reasons. But it was tough because even though I would cheerfully admit that Tom is the one most likely to be described as "absolutely stunningly gorgeous," there's just something sooooo sexy about Michael. Maybe it's that his character on Smallville is so confident and self-assured. So smart. So devious. So bald. It has to be something about Lex, that's for sure, because as I was doing research on Michael, I discovered that I've actually seen him in several things before. Yet he was completely unfamiliar to me, and it's not just because he's been shaving his head for his current role. There's definitely got to be more to it than that. And what I think it is is this: you know that old cliche about women marrying good guys but lusting after bad boys? I think it might actually be true. I mean, I just married an absolute sweetie, but every Tuesday night at 9pm, I am drooling over Superman's nemesis and wondering how I can land a role as his girlfriend on the show.

Oh, hey, I sort of casually dropped the news that this isn't Michael's first foray into moving pictures up there without following up on it, didn't I. Did he look at all familiar to you? He probably should, since he was one of the stars of a previous WB show, "Zoe, Duncan, Jack and Jane." And before that, he was on a WB flunky called "Tom" with Tom Arnold. But I never really watched either of those, though I know that "Zoe" lasted at least two seasons. What I know I HAVE seen Michael in are two of his movies: "Urban Legend" (a teen slasher flick that's not too bad) and "Midnight in the Garden of Good and Evil" (a non-teen non-slasher flick that's really really awful, despite the fact it starred two ex-Boyfriends (John Cusack and Kevin Spacey) and was directed by a third (Clint Eastwood).)

I recently rented "Urban Legend" again just because I couldn't believe he was actually in that without me noticing. But, it's true: he was and I didn't. And I have no excuse for that, as you can plainly see from the photo above that even WITH hair, he's damn cute. And in the movie, he's even a pretty snazzy dresser. I guess maybe I was just blinded with fear? It IS a slasher movie, after all.

Anyway, enough about that, let's talk about Lex! I already told you last week why you should be watching the new show "Smallville" -- it's one of the greatest shows to hit the airwaves this season, and I'm not the only one who thinks so. "Smallville" was recently listed as number one of the top five best new shows around by Entertainment Weekly magazine. I know this because I just got that issue on Friday (and all you Tom Welling fans better run right out and get it because Superman is on the cover looking really really, um, SUPER). This show's got everything -- great plots, great characters, great settings, great actors, and great gods, is that actually Bo Duke playing the dad? 'Tis! So, how can you go wrong?

Especially when you add into the mix a couple of very interesting twists on the old story -- first of all, Superman doesn't wear tights. In fact, he's just now starting to realize he has super powers in the first place. And second, he and Lex Luthor are FRIENDS. That's right -- friends. But don't let that fool you -- there's clearly something very shady about Lex and even Supe knows it. But now we'll finally get to see what it is that really drives those two into archenemy status. From the beginning.

Of course, one of the things that clearly is going to be a factor in that transition is the fact that Superman made Lex's hair all fall out. Even though you and I think that Michael looks really great bald (such a nice head!), I'm sure Lex is a little on the bitter side about it. For some reason, one I'll never understand, men are really insecure about their hair. Even throwing out phrases like, "Yul Brenner!" "Captain Picard!" or "Kojak" (well, maybe not Kojak) doesn't seem to help with that. But the good news is that Michael, Lex in Real Life, says he really doesn't mind having to shave his pate for the show, for which I am mighty glad, since, as I mentioned before, he has SUCH a nice head! So shiny!

Okay, okay, enough of that. Time for a little biography on Rosenbaum: he was born on July 11, 1972 in New York, but was brought up in Indiana. While in high school, he decided to audition for a play (on a bet, rumor has it) and landed a prominent role. He quickly found he loved acting and continued to play the leads in several stage productions while earning himself a B.A. in theater and communications from Western Kentucky University. After graduation, he headed back to New York to pursue a career in acting and appeared in several off-Broadway productions and a few independent films. His big break came when he got his first series regular role as Jonathan on the (really awful) WB comedy series "Tom." Though that show died a quick death, Mike's career took off from there, eventually taking him all the way to where he is today: teenage heart-throb status on one of WB's greatest shows ever (if I do say so myself).

In his free time, Mikey likes to play ice hockey, a sport he's loved since childhood. He also is an avid musician, playing both acoustic and electric guitar.

Next up for Michael are several feature films, starting with "Rave Macbeth," a retelling of Shakespeare's "Macbeth" set in the world of rave music (hmmm, though I have been impressed with some modern-day remakes of Shakespeare plays ("Ten Things I Hate About You" leaps right to mind) I have to confess I fear this one a bit. Rave music?). Then will come "Poolhall Junkies," a thriller also starring ex-Boyfriend Rick Schroder about poolsharks (okay, sounds promising). In 2002, however, we'll get "Sorority Boys," a comedy that, thankfully, Michael appears to have only a small role in (it's about three college boys kicked out of their dorm who decide to dress in drag and join a sorority -- I can smell the stupid boob jokes from here!). And finally, "G-S.P.O.T.," another comedy, this time starring Eileen Brennan and Carol Kane (can't find out anything about the plot, and I'm sort of thinking that might be a good thing).

But, well, okay, so 2-3 out of 4 ain't bad. The key thing we all need to keep in mind is NOT that Michael Rosenbaum has a huge future ahead of him on the big screen (though I'm sure he does). What's far FAR more important (to me, anyway) is that you guys behave and keep tuning into the WB on Tuesday nights, so we can keep him working on at least ONE great project -- Smallville! Just remember, though, when he's Lex, he's mine. Oh heck, nevermind. When he's not Lex, he's mine then too. This is one guy I just can't share.