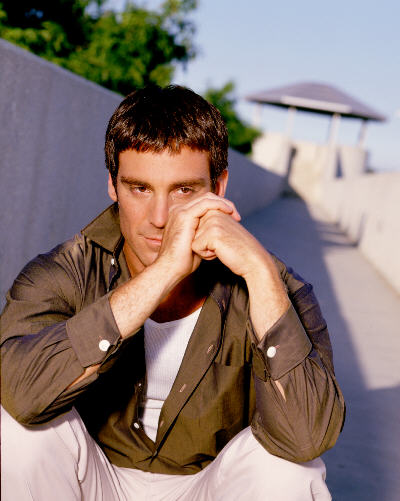 This week's Boyfriend, Michael T. Weiss, is a gift I am giving to the legions of fans who have diligently written me (about 3 per week for the last 800 years) to tell me I am missing the Best Show on Television, also known as "The Pretender." My response to every one of the 87 bazillion messages I got about "The Pretender" was, "Hey, yeah, that show looks kinda cool! I'll try to remember to watch it this weekend!" And then when a fan emailed me back to see how I liked it, I invariably replied, "Oops. Did you say it was on Saturdays?"

Anyway, the sad truth is I forgot to watch "The Pretender" so many times its ratings plummetted and NBC decided to give it the boot. Well, okay, I don't know if it was ENTIRELY my fault, but I sure feel pretty bad about it. Especially since I bet that is news to some of you guys and you are now on the verge of tears. (I know how you feel -- they cancel all MY favorite shows too.)

The tricky thing is, in case you weren't paying attention, this means I'm featuring a Boyfriend this week that I haven't got clue-one about. Now, the last guy I ran who I didn't know anything about was, if you'll remember, Secret Agent Jack, who is currently undercover as a Banana Republic model (Click here to read SAJ's write-up). However, I'm pretty sure Michael T. Weiss (and you have to say the whole name when you talk about him because it sounds so cool. Michael T. Weiss. Michael T. Weiss. Michael T. Weiss.) is NOT a secret agent and therefore, I figured I might be able to find some information about him on the web.

Little did I realize that there are approximately 90-million-and-one web sites out there dedicated to "The Pretender" (see, obviously you guys know something I do not). So, not only do I have info info info, but I also got that fabulous photo up there. When I was downloading it, I was thinking "Hmmmm, what the heck am I supposed to say about this guy, anyway?" and after I was done downloading and started to really LOOK at it, the answer came to me as if in a dream: DAMN, he's cute.

Look at his eyebrows! Ooch! How sexy is that? Someone needs to email me to tell me if he's an eyebrow archer, because if he is, his MF Score is going to go up. By several points. SEVERAL points. I'd also like to take this opportunity to point out his jaw, which reminds me an awful lot of the jaws of various cartoon superheroes, most of which I was madly in love with when I was about five years old. I truly dig the square jaw, strong cheekbone look. It's so Batman.

Anyway, let's get started, shall we? In case you're like me and you've never watched the show, here is a little bit about the plot. MTW plays "Jarod," a guy who was sort of kidnapped and held prisoner at "The Centre" , pronounced, no doubt, "the saun-tra." The Sauntra is a research institution (run by the government? probably -- those bastards.) that wants to study Jarod's weird ability to become any kind of person he wants to. That's right, Jarod is a "pretender," a guy who can assume any role he wants to and pull it off without a hitch. Bam! He's a doctor! Bam! He's a rocket scientist! Bam! He's my Boyfriend!

Truly amazing. However, lucky for the population at large, Jarod manages to escape from The Centre and soon is roaming around the world doing good deeds and trying to evade the bad guys who want to lock him back up again. Now, that's about all I know about the show. However, based on the Pretender Drinking Game, I can also add a little trivia. For example, since you have to take a drink everytime Jarod eats Pez, I think it's safe to assume he does that relatively often. He also must not have experienced much of life on the outside until he ran away, because you have to take TWO drinks everytime he discovers a new kind of junk food (and how many people Jarod's age are STILL discovering junk food? Most of us by this time are trying desperately to UNdiscover junk food, aren't we?). There's some chick named Miss Parker who is connected to Jarod somehow (take two drinks if she chases after him, which must mean she doesn't do it too often, though that doesn't make a lot of sense to me because if I knew where he was, I'd be on my way there RIGHT NOW) (I mentioned the eyebrows, right?? Potentially ARCHING eyebrows? Hubba hubba!). But wait! I think she must be one of the bad guys, because I see you have to take three drinks everytime she tries to kill him.

These drinking game things are so handy.

Anyway, he eats Pez, he's a fugitive from the government, he's able to transform himself into anybody he wants to be, AND he's really really incredibly good-lookin'. Now how on EARTH did I miss this show?? I'm so stupid! Argh! Why? WHY didn't I listen to you?

Because I have something important to reveal to you all. You see, I ALSO am a "Pretender." Yes, it's true. Every week I assume the role of a differnt person's Girlfriend. You think it's EASY switching gears that regularly? Liam Neeson one week, Jimmy Smits another, secret agents, shapeshifters, I've dated them all! And all the while I've maintained constant-Girlfriend status to THREE others -- MacGyver, of course, the Constable, duh, and my real-life Boyfriend, a newspaper reporter named Jim. They ought to kidnap ME and do some research. I'm an enigma!! I am!

What I was trying to get to there, though, is that, as a Pretender myself, I should be able to transform myself into a regular rerun-watcher relatively easily when the show actually hits TNT. So, I still have time to be a good guy. To redeem myself. To learn more about Michael T. Weiss' eyebrows. You know, being a Pretender is a lot of hard work. It will be nice finally be able to relax and watch somebody else take on the job.