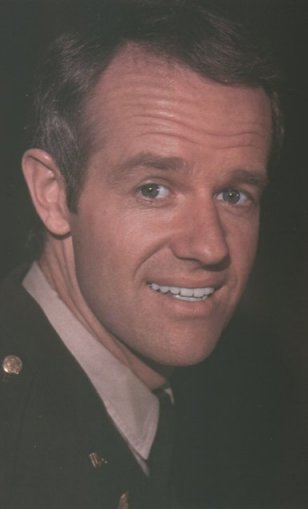 This week's Boyfriend is probably not going to excite many of you. After all, he's old(er), he's not a big movie star, and he definitely isn't someone a lot of you have emailed a request for (current favorites: Mandy Patinkin, Orlando Bloom (AKA Legolas), and Josh Hartnett -- strange mix!).

However, at the risk of disappointing EVERYBODY, I just had to make Mike Farrell a Boyfriend of the Week. A few weeks ago, the FX channel ran an all-day marathon of my all-time favorite television show, "M*A*S*H," and me being such a big fan and it being on a very rainy Sunday, I had the TV tuned to FX for 12 full hours (though I will confess I wasn't actively watching (or maybe I mean passively watching -- can you be an active couch potato?) the whole time). I realized, somewhere around hour four, that I don't just keep comin' back to that show because Hawkeye makes me laugh and Colonel Potter reminds me of my Dad -- I also have the major hots for Captain B.J. Hunnicut. That uniform. That devious grin. Those sweet eyes. That handlebar mustache! B.J.'s the best!

Actually, what B.J. really is is a combination of Hawkeye and Potter -- a mixture of their finest qualities, distilled in the Swamp, poured into a martini glass, then shaken but not stirred. He's got the sense of humor and great laugh of Hawk, but also the quiet contemplation, loyalty, and common sense of the Colonel. Put 'em together and what have you got? Bippidy Boppidy Boo! Or, more accurately, a character who is maybe the most vital member of the gang -- the counterbalance that keeps the whole thing from flying off wildly in either direction (stern v. silly).

The interesting thing about Mike Farrell is that he has sort of reprised that role in a show on primetime TV today -- "Providence," which airs Friday nights at 8pm (on NBC, I think). He plays a doctor again too, oddly enough, though this time he's Jim Hanson, D.V.M. Yet while his patients are furrier and far less likely to be suffering from shell shock, his roommates haven't changed all that much. There's Syd, his oldest daughter, who is like a combination between Winchester (refined to the extreme at times, but not without a soft side) and Corporal Klinger (snappy dresser!). And there's her sister Joannie, who is more like Hawkeye (rule breaker) and Radar (a bit understaffed in the common sense department).

Once again, Mike plays the man who represents a more balanced combination of these crazy personalities. And, as if that wasn't a great enough idea on its own, the show is set in Rhode Island, my all-time favorite state!

But what I like about Mike Farrell is not just his two great characters. Nor is it my (sincere) hope that, since their personalities are so similar, he's being typecast into a role so natural for him it has BECOME him (or vice versa, if that makes any sense). What I like also has a great deal to do with his voice, which is gentle and smooth (he should narrate more documentaries, in my opinion). And, even more important, his smile, which, honestly, lights up both his face and my own.

Ew, did I just say that out loud? Behold, the power of cheese!

I just like him, okay? There's no sense trying to explain it. He's sexy in a more real way to me than other, more traditional Boyfriends are. He doesn't have Brad's buff upper body or Constable Fraser's red uniform. He doesn't have a great butt (well, he might -- I haven't checked) or swoony biceps. What he has instead is an entire body that just oozes comfort and security. I can honestly imagine marrying him and being extremely happy for the rest of my life.

You know, or at least until I'm indicted for bigamy.

It's hard to explain (obviously). Mike isn't thrilling in the same gasp and pitter-patter way some of the younger, sassier Boyfriends are. I think I find him thrilling because he's so steady. So real. So solid? So. . . somebody get me a thesaurus!

Okay, okay, enough with the explanation. It's really not going the way I planned. On with the easy part -- the biography. Mike is one of four children. His father, who died when Mike was 17, was a carpenter at Hollywood Studios. But that wasn't the only contact Mike had with the acting world when he was a kid -- he also was schoolmates with Natalie Wood and Ricky Nelson! But back in his youth, Mike was far too shy for the limelight. So, in the 1950's, he entered the Marines for two years. His pals in the Corps knew about his bug for acting, though, and after his stint in the military, they began to push him into workshops and classes. From there, Mike went on to study acting at the University of California in LA and the Jeff Corey Workshop.

A regular role on "Days of Our Lives" got Mike the recognition he needed to move up in his career, which ultimately took him straight to the top with MASH in 1975. When the show ended in 1983 (the longest running sit-com ever), he resisted picking up another television series and instead began to focus on other interests. He started a production company and got involved in politics (lobbying against the firing of gay teachers, as well as U.S. involvement in Ecuador in the 1980's). He is currently a member of California's Commission on Judicial Performance and was also named the Goodwill Ambassador for the United Nations High Commissioner for Refugees. His production company has made a number of films, most recently producing "Patch Adams," based on a true story (Mike is friends with the real Patch, apparently).

Next up for Mike Farrell -- more more MORE years of bringing me joy as the dad on Providence (though I'm ready for his head injury to heal and his normal personality to come back to him. Please). And, as of right now, that's about it on his professional plate. In the last few years, he's mostly just popped up in a few made-for-television movies and documentaries (the latest was in 2000 and was called "The '70s: The Decade That Changed Television"). On February 6th, however, he'll celebrate his 63rd birthday. Probably have a big party. Invite all his friends and admirers. Thank them profusely for loving him so loyally over all these many year. Serve them cake. Smooch their cheeks. I'll be watching my mailbox for the invite, Mikey. And, until then, I'll be watching for you in Providence Friday nights on NBC and in Korea 400 times a day (feels like) on FX!