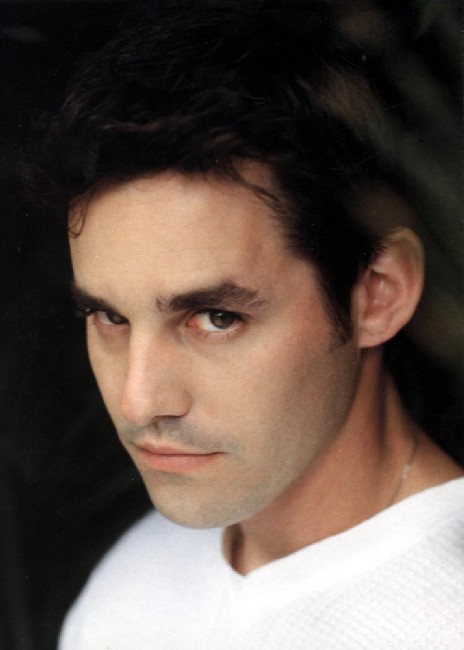 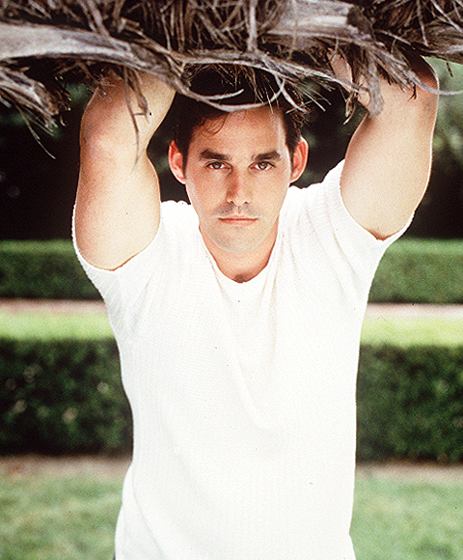 Okay, for months and months now (years and years, really, but saying it that way makes me feel old), a gazillion of you have been pestering me (did I say "pestering"? I meant "politely nudging") to feature James Marsters as a Boyfriend of the Week. You know, "Spike" on "Buffy the Vampire Slayer." Your high, mighty praise of both him and his show finally convinced me to tune in, and about six months ago, I started watching the reruns on FX relatively regularly (i.e. a couple of times a week). The more I watch, the less able I am to stop watching, so I guess I can say with some degree of accuracy that I'm now officially hooked.

And isn't that JUST what I needed -- ANOTHER must-see television show to add to my ever lengthening list. Yee gods, pretty soon, I won't have time to do anything else around here! And it'll be all your fault! I'll never forgive you!

But we'll have burn that bridge when we come to it. Because, for now, I'm still grateful to all of you for getting me started on it. You guys were right -- it's one of the smartest, funniest, and most creative shows on TV these days. I just love it! However, as you've no doubt already realized, Spike wasn't the guy who caught my eye. Instead, I've gotten hooked on the show's major underdog (disgustingly predictable, aren't I?), Alexander "Xander" Harris, known in real life as Nicholas Brendon (which are his real first and middle names -- he's kept his real last name a secret, apparently, for privacy's sake. This odd act leads me to believe it's a very well-known last name. Clinton? Travolta? Khrushchev? So mysterious! I like that in a man!)

Now, what I really adore about Xander is not just that he's a total cutie -- a take-him-home-to-mom type. 'Tis true he's cute, no doubt, but what's even better (to me, anyway) is that he's sharp of wit and quick of tongue. Xander has the greatest verbal zingers on the show, if you ask me. He's never short of a sarcastic retort (or six) -- at least one for each and every occasion. And, even better, he truly doesn't seem to know how great he is. He's delightfully oblivious of most things, actually. I love that. I am often pretty oblivious of things myself. Peas in a pod. Birds of a feather. Few Jacks short of a full deck?

Okay, no, of course, I'm still a total Xander rookie, and I'd be a fool to say much more than this, since I know very well how many rabid Buffy fans there are out there. If I say one thing wrong, I'll have an inbox full of corrective emails in a heartbeat, some from people who are actually INSULTED that I didn't know better. I know this because I can do the same thing with MacGyver, though using the term "rabid" to describe my fandom isn't nearly as great a pun in this instance. Not as many fangs to be found on that show.

Where was I? Oh yeah, I'll shuddup now while I'm ahead.

A little background about Nick (did I mention that "Nick" is one of my favorite names?): he was born on April 12, 1971, as was his identical twin brother, Kelly Donovan (who has been on the show as well, in an episode that involved two Xanders -- haven't seen this one yet, though). (Did I mention that I'm a twin myself? The coincidences begin to pile up right here. . .). Nick got into acting for a variety of reasons, no two the same on any given fan site. The two main ones appear to be first, that baseball didn't work out due to an arm injury; and second, that he discovered that when he was acting, his stutter disappeared. Heard that one from a few other Boyfriends, if I remember correctly. Interesting.

Whatever the reason for it, though, his first few spins through Hollywood didn't really inspire him. After some TV commercials and guest spots, he took a break from Tinsel Town life and took on a variety of jobs, testing out a few other careers. These careers included: medicine, production assistant, janitor, daycare counselor, and waiter. Unfortunately, he was eventually fired from all but one of his dozens of jobs. Taking this as a sign, he went back into acting and after only two months back on the scene, he had landed the Xander role on "Buffy."

The good news is he's tall: 5 foot 11. The bad news is he's married (though, coincidentally, he got married in the same month and year that I did, September 2001).

For fun, Nicky likes baseball (Dodgers fan, no doubt), reading, writing poetry (be afraid, be very afraid), and serving as the official spokesman for the Stuttering Foundation. Aside from Buffy, he's also been in three movies, only one of which is one I'm likely to see. That one is "Psycho Beach Party," which is a spoof of 50's beach party movies and, coincidentally, was assistantly-directed by the son of my old boss. Yes, that's right, folks. Only TWO degrees of separation between me and Xander. Dude, we are so meant to be.

The other two movies sound so awful I can barely stand telling you about them. The first is "Children of the Corn III," as if I and II weren't bad enough. The second is called "Pinata" and is about, I swear I am not making this up, a group of teens trapped on an island haunted by a demon hidden inside a pinata. Woo-wee! Babe, stick to TV, okay? For your own good!!

Luckily, while there was a moment there a year or two ago when it looked like Buffy was going to get dumped, another network has picked it up and FX is airing 4 episodes 5 days a week. It's not going anywhere, in other words. And this is good news for a multitude of reasons. The first is the obvious one: Xander is here to stay, and thus so is his cute crooked smile and messy hair. The second is one that's going to make a gazillion of you shriek with glee -- in just the past few days, I've started to think Spike is kinda cute after all. And so full of depth! Is he good? Is he evil? Does he even know? Do we even care? And woo, that bad-boy thing he's got glimmering in his eyes gives me chills.