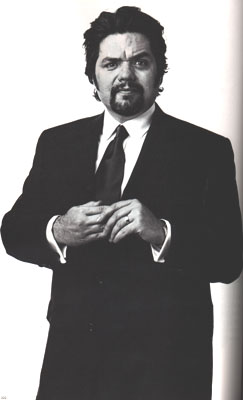 In case this week's Blurb (the thing in between my name at the top of the page) has a few of you confused, go to any sports web site IN THE WORLD and you'll see that yesterday the Mariners (my home team, as well as the source of two of the best Boyfriends of all time) made it into the playoffs. Which means they have a pretty good shot at making it to the World Series. Yes, I said THE WORLD SERIES. I tell ya, it's almost more exciting than getting engaged. And I would know.

But let's get to work now, shall we?.

This week's Boyfriend is very cleverly timed. Why? Because his new television series starts tonight! This time, I'm writing about a tv actor before his show goes off the air. Indeed, before it is even on the air to begin with. In the biz, they call this "jumping the gun." Generally, it's frowned upon, since many many many television shows never make it past the pilot.

But what do they know? As if anything starring Oliver Platt could stink! Not only is he one of the funniest men alive (on this planet anyway), he's also drop-dead adorable, he's got a full head of lustrous dark curly hair (sigh), and he's tall tall tall (6 feet 3 1/2 inches) which doesn't count for nuthin' where I come from (Earth).

If you don't recognize Oliver Platt, there's really no hope for you. Sorry to be so blunt, but there it is anyway. Go on home now. If you sort of recognize but cannot place him, I am here to help you. Oliver Platt has been in, and I count, sixty-one bazillion movies. Or thereabouts anyway. And it's virtually impossible that you haven't seen at least one of them, because he's a genre-jumper. Yes, he does comedy. Yes, he does drama. Yes, he does horror. Yes, he even does family-friendly. And, before you try and stop me, it's even true he does science-fiction, though I've tried very very hard to forget "Bicentennial Man."

Some of my all-time favorite Oliver Platt films:

And now his new television show, "Deadline." In case you've missed the preliminary ads and news articles, I'll fill you in. The show was created and is being produced by the Emmy-winning tv team Dick Wolf and Robert Palm ("Law & Order"). Instead of lawyers and judges, though, we're getting editors and investigative reporters. Oliver plays a "crusading New York newspaper columnist" who has a Pulitzer Prize and loves to raise hackles using his rabble-rousing byline "Nothing But the Truth" and then putting anything BUT nothing-but-the-truth (still with me?) in his columns. Darn those columnists -- I knew they couldn't be trusted.

Anyway, I do know what the plot of the first one is -- Platt's character (Wallace Benton) finds out that a man his column may have helped put on death row is actually innocent. He enlists the help of his two brightest students (he has a part-time college teaching gig) to help him "turn over rocks and kick down doors" to find out the truth. See? Journalists do too have consciences. They are just often late in revealing themselves. Miss Manners would not fully approve, but she might be willing to cast her eyes askance. This time.

Incidentally, long-time Girl Crushee Lili Taylor is also on the show. If you don't know who Lili Taylor is, it's time for you to rent "Dogfight."

So far, the advance buzz says it's a promising show. But, since we saw "Law & Order: Special Victims Unit" thrive even though it stinks ("to high heaven"), we already know anything by Wolf and Palm is a guaranteed hit. And yay for that, too, as it means we can see our Boyfriend on a fairly regular basis (and then in reruns each summer). One warning, however: recent reports say the pilot of "Deadline" is a little weak. Episode two, however, purportedly kicks arse. So hang in there at least that long and then give up if it looks like we've got another L&O:SPV on our hands. (Note to fans of L&O:SPV: sorry.)

A little biography on Ollie: He was born on January 12th, 1960 (Capricorn again). His father was a US Ambassador and, as a result, Oliver grew up all over the world. Washington DC (definitely the scariest and most exotic place on the list), Eastern Asia, and the Middle East were the biggies. Of them all, Oliver has said he liked living in Tokyo best. I think it's the green tea ice cream they have at the Baskin & Robbins there that probably got him hooked. (It's true! They really do have green tea ice cream at the Japanese Baskin & Robbins! They also have a kind called "Dancing Pears." But that doesn't sound like one that would hook anybody -- pear ice cream?? Yeesh.)

By age 18, Oliver had attended at least 12 different schools. Which really explains a lot about his character today. He's outgoing and a goofball, two keys to making lots of pals when you're constantly the new kid. After his high school days, he applied these skills to drama school at Tufts University in Massachusetts where he got his BA in 1983.

After graduating from college, he stayed in Boston for awhile and did regional theater. In 1986, he moved down to New York (I think it's down, anyway) and did some off-Broadway work there and some additional theater work in Connecticut (one play with Stanley Tucci -- the two have collaborated often since then as well). Two years later, he got a little help from Bill Murray and landed his first film role, in "Married to the Mob." Since then, he's been in, as I said earlier, a bazillion films, playing everything from a swashbuckler to a romantic fluffball. And with the greatest of ease.

Trivia: That's really him singing in "CinderElmo," but that's not really him wrestling in "Ready to Rumble." Ooo, but that WAS him swordfighting in "The Three Musketeers," so we don't mind so much about the wrestling thing, right, girls? Swords are so cool. In fact, the guy who trained Oliver to swordfight for the role, former British Olympic fencer Bob Anderson (who also trained Errol Flynn AND staged the light saber duels in the Star Wars movies) said this about him, "They couldn't have picked anybody better than Oliver Platt for Porthos. He's a fun man, with a whole bag of tricks and gimmicks." I wholeheartedly agree. With all my heart.

Now, the only bad thing about Oliver's new show is that it means a hiatus from films for awhile. He's got nothing in the works for the big screen at the moment, which is kind of a bummer. However, looking on the bright side, this gives us all a little time to catch up on the old OP flicks we may have missed. If I were you, however, I would continue to miss "Bicentennial Man" and "Executive Decision." If you don't take my advice, I cannot be held responsible later. On my own list for future rentals is "Bulworth," "Funny Bones" (his personal favorite so far), a movie called "Gun Shy" that I just saw an ad for, and "Three to Tango" (costarring ex-bf Matthew Perry). So, don't rent those. I don't want to find them checked out when I go to my local video store. If I do, you are all grounded. No tv for a week! Eat your peas! Go to your room!

Sigh. Won't I make a great mother someday? I've got ALL the catch-phrases down. (I've been working on the wife catch-phrases recently: "Pick up your socks!" "Do the dishes!" "Gimmie that checkbook!")