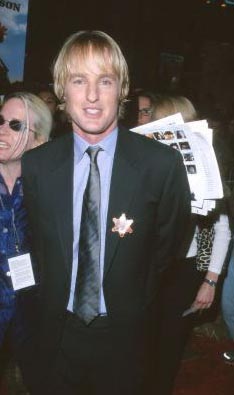 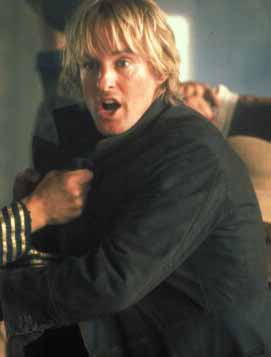 Hope everybody had a nice holiday (if you live in a country that celebrated one last week, that is). Glad you didn't give up on me completely for sticking you with Colin Mochrie two weeks straight. But even amazing workaholics like me have to go on vacation from time to time. Keeps everybody around me happy, even if it disrupts your lives a little bit.

Anyway, though my vacation was well-justified (it is so hard to get up at 6am five days a week for 50 straight weeks, I am not kidding), I still feel a wee bit o' guilt about it. So, to make it up to you, I'm featuring an extreme cutie this week. EXTREME cutie. And while he's relatively new to the movie scene, he's definitely going to make it big there. How do I know? Because, aside from great talent and nice biceps, he's got one of the finest crooked smiles this side of the Mississippi.

And the other side, too, for that matter.

I first experienced Owen Wilson about three months ago when I rented the totally bizarre and oddly charming movie "The Minus Man." In it, Owen plays Vann Siegert, a serial killer who drives around the country, randomly killing as he goes, until he eventually settles down in a nice little town in the middle of nowhere. There, he moves in with a nice family and takes a nice job and meets a nice girl and becomes everybody's nicest neighbor. Who would suspect this fine upstanding young citizen of knocking off the town's hero? He's such a big goofy aw-shucks-kinda sweetie! In fact, his killings are more like boring background-music that anything else -- barely noticeable and hardly worth mentioning later. But despite the nonchalance with which he kills, Vann's kind of tortured by the deaths on the inside. He isn't a violent killer (his victims accept his offer of a sip from his poisoned booze flask), and his killings are almost accidental (usually, the victims request the sip to begin with), but he still doesn't like doing it and it upsets him. See, he's not a TOTAL jerk. At least he feels kinda bad about it!

Anyway, Janeane Garofalo is in "The Minus Man" too, which is the reason I rented it in the first place. But Owen's quiet charm and sweet face just totally won me over, even though the ultimate effect those two elements created was one of extreme disturbance! Sweetie-pie. Serial Killer. Sweetie-pie. Serial Killer. Hmmmm, that pattern rings a bell (think Martin Sheen).

Happily, the next Owen Wilson movie I saw kept all his charm and sweet looks, but ditched the creepy stuff. And then it added ex-Boyfriend Jackie Chan. Yep, I'm talking about "Shanghai Noon," folks. And if you haven't seen it yet, you are truly missing one of the greatest Westerns of all time. Or, at least, one of the silliest.

"Shanghai Noon" is about a Chinese palace guard (Jackie) who travels to the Wild West to rescue a kidnapped princess. There, he hooks up with Roy O'Bannon (Owen), an extremely goofy train robber with delusions of grandeur that get him a little carried away at times -- not to mention the delusions of invincibility. . . The combination of Jackie Chan and Owen Wilson is one to swoon over, I'm telling ya, and if you haven't seen this yet, I urge you to rent it the next time you need a little cheering up. Or a lot of cheering up. Works either way.

Now, checking the list on Owen's IMDB site, I see that I've actually seen a few other of his movies, though I don't remember him from them. For example, I've seen "The Cable Guy" ("Robin's date"), "Anaconda" ("Gary Dixon" -- I might remember him in this, but only vaguely), "Armageddon" ("Oscar Choi"), and "Rushmore" ("Guy at party"). Oh, and "The Haunting," but it's okay that I don't remember him there, since that entire movie was one of the most forgettable I've seen in my lifelong career of bad-movie watching. The good news is that he's also in "Bottle Rocket," which I've been meaning to watch but haven't yet, and "Meet the Parents," with ex-Boyfriend Ben Stiller, which I've heard is really really great.

He's also got two more movies due out in 2001. The first is called "Zoolander" and it too stars Ben Stiller (as a clueless fashion model brainwashed to kill the president of Malaysia). The second is called "Behind Enemy Lines" and is about a U.S. Marine vet and a young Naval pilot who are downed over hostile territory and have to fight their way out to survive. Looks like Gene Hackman is the vet, and Travis Fine (the cute orderly guy in "Girl, Interrupted") is the pilot. Sounds pretty good, though I haven't heard any official buzz about it.

Now, aside from Owen's comic knack, adorable grin, and incredibly sexy voice, he's also got another superbly exciting feature -- his brother is Luke Wilson (that cutie in "Rushmore" ("Dr. Peter Flynn") and "Home Fries"). So, if things don't work out with Owen, we can fall back on his brother (or vice versa, depending upon which one you chose to begin with). It's good having a safety net like that already established and securely in place.

Owen and his brother, by the way, entered the movie scene together, when they teamed up with Owen's old college buddy Wes Anderson to make the indie hit "Bottle Rocket," which is based in part on Owen and Wes's experiences as roommates in school. The three of them teamed up again for "Rushmore," but Owen took a much smaller role in that one (unfortunately, since it was an even bigger success than Bottle Rocket). In fact, his role isn't even credited. Ouch. Bad move, O.

The only other information about Owen I could find was that he was a real pain in the arse in high school (was kicked out in tenth grade, but enrolled in a New Mexico military academy and managed to get his diploma). When asked which movies have most inspired him, Owen has named the films of Terrence Malick, the Coen brothers, Sam Peckinpah, and John Huston, among others. (Throw those four together into a movie and you might come out with something like "The Minus Man," to be honest). What his romantic-life status is, I dunno. I did see a few pictures of him with a girl on his arm, but didn't run across anything that sounded official. Like a marriage certificate.

However, whether or not Owen Wilson is taken really doesn't affect this whole thing, does it? The great thing about having a weekly Boyfriend is that you never have to take the relationship too seriously. So, he can be married, for all I care, and as long as he's mine for the week, that's all I need. I won't say a word to the wife, and I trust you won't either. Right, gang? Right! And when it's all over, I'll just spend a rainy Saturday watching his movies and crying softly with nostalgia. Sigh. Does it get any better than that? The answer to that question is no no absolutely no. So, video store clerks in my area pay attention -- you'll be seeing me in a week or two moping around your stacks with a pile of Owen Wilson movies in one hand and a damp hanky in the other. Do not be alarmed. I am harmless.