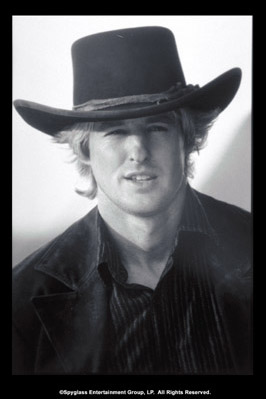 Well, hallelujah! The Boyfriend of the Week is back in business! And even though it's writer, director, producer and star (moi) is now officially and legally "taken," never fear -- I'm back and absolutely nothing has changed. The Boyfriends will still be as cute, funny and weekly as ever. And I shouldn't need a vacation for a VERY long time.

Thanks, by the way, for being so patient.

But enough about you, let's talk about the Boyfriend this week!

I actually came up with the idea to feature Owen Wilson while on my honeymoon in Hawai'i (so, there ya go -- a mere four days after I got married I was already thinking about seeing other people). We were in Waikiki at the time and had just had a long, exhausting day of. . .lying on the beach working on our tans and drinking Mai Tai's. So, instead of doing anything strenuous for the evening (like drinking MORE Mai Tai's), we decided to hit the local multiplex for a movie. Fortunately for us, it was a multiplex of two, so choosing wasn't a problem. It had to be "Zoolander" -- I'm not a major Michael Douglas fan, and his latest was our only other option.

Now, I had heard good things about "Zoolander" from our hometown newspaper. The paper recently got a new female movie critic who definitely speaks my language. Her comment on the flick was that it was absolutely one of the stupidest movies ever -- but it had her laughing so hard her cheeks hurt. Perfect! And, it turns out, true! Just think about this for a moment and you'll get it: ex-Boyfriend Ben Stiller and now-Boyfriend Owen Wilson -- as professional models.

It was hilarious! Genius! And halfway through the movie it occurred to me that Owen is not only one of my favorite comedic talents these days, but he's also pretty darn cute.

I have to confess, though, that I couldn't actually remember if I'd made him a Boyfriend already or not. I mean, I instantly thought of several movies I've seen him in recently and it wouldn't have surprised me if one of them had already inspired me to make him a Boyfriend. My memory's been shaky ever since I started planning my wedding and all those Waikiki Mai Tai's weren't helping with that much. And, the worst part is, after I posted this this morning, someone emailed me within an hour to tell me I HAD already made Owen a Boyfriend of the Week (see: this). But now it's either this or I take another week off -- you'll have to settle for this! Sorry for the repeat, but at least he got a better score this time. And I have more interesting things to say now too. Um, shoot. Sorry, y'all.

Anyway, what were those other Owen movies I saw and liked so much? Pretty much all but two of the movies Owen has made (and I discount those two only because I haven't seen them yet. FYI, those two are: "Bottle Rocket" and "Breakfast of Champions"). Owen Wilson is actually the king of a couple of my favorite "guilty pleasure" movies: "Armageddon," "Anaconda" and "The Haunting." But I'd say my favorite OW film is definitely "Shanghai Noon," co-starring ex-Boyfriend Jackie Chan. A western! A western that's hilarious and stars two total cuties! You seriously can't go wrong with that one, ladies, even though the plot is a little bit on the shaky side. Another favorite is "The Minus Man," a weird movie in which Owen plays a very polite, um, serial killer. There are also a few movies he's been in that I've seen but don't remember him from. Those include: "Meet the Parents," "Rushmore," and "Permanent Midnight." But I'm sure the problem here is mine -- he was probably wonderful and I was probably just distracted (all those movies are loaded with other Boyfriends, exes and potentials). More than anything, that probably just means it's time for me to rent them again, right? All's well that ends well!

And, speaking of playwrights (Shakespeare, get it?), did you guys know Owen Wilson is actually an accomplished screenplay author? He and pal Wes Anderson, whom Owen met while in college (they were in a writing class together), have so far written three movies together: "Bottle Rocket," "Rushmore" and "The Royal Tenebaums," which is due out in December.

While "Bottle Rocket" was a box office flop, "Rushmore" was a smash hit (and I'll tell you why -- it's both clever and hilarious, which is a rare and valuable combination these days when it comes to comedies). So, I have no doubts that their next flick, "Tenenbaums," will be great, especially since it also stars Owen's cute brother Luke, who definitely has a future here at the Boyfriend web site.

A little biography on Owen Wilson: he was born in Dallas, Texas on November 18, 1968. Though he was kicked out of school in the tenth grade for being a troublemaker, he managed to talk somebody into letting him finish out high school and promptly signed up for classes at the University of Texas, where he got a BA in English. While he was there, he met Wes Anderson, who eventually convinced Owen to be in one of his plays. It was that gig that got Owen bit with the acting bug and when he and Wes started collaborating on the screenplay for "Bottle Rocket," Owen decided to play a part in that as well as work behind the scenes. "BR" was picked up by producer James L. Brooks (Owen says: "He came by our apartment, and I think he was shocked by our living conditions. I think that actually helped us.") and though it wasn't a box office success, it did get a pretty decent cult following. And it got Owen a little bit of attention, which he used to score some small parts in movies like "The Cable Guy." Later, he and Wes collaborated again on "Rushmore," which ended up being a huge hit. That led to Owen's casting in "The Haunting," which, while being a pretty terrible movie, did bring him into the main stream.

Next up for Owen, aside from "The Royal Tenenbaums," is a starring role in "Behind Enemy Lines." In that movie, Owen plays a fighter pilot shot down over Bosnia after photographing a mass grave. His CO, Gene Hackman (who is also one of the stars in "Tenenbaums," incidentally), has to come in and try to get him out alive. Sounds like a pretty good one -- can't go wrong with Gene Hackman playing somebody in charge. He's good at that. But it will be interesting to see Owen Wilson play a really serious character. That is, I'm sure the fighter pilot is no Nietszche. He's probably a funny prankster as most fighter pilots are. But the movie sure sounds serious and when was the last time we saw Owen do that?

But I have faith in him. Why? Because even if he screws it up, he'll still have that cool squished-looking nose and that totally sweet voice. And if all else fails, there's always Gene Hackman, who I also keep meaning to make a Boyfriend but never seem to get around to it. So, watch for "Enemy" and "Tenenbaums" to come out and, in the meantime, hit the video store for "Shanghai Noon," at the very least. I swear you won't be disappointed! And if you are, well, hey, it's my first week back. Maybe I'm just a little bit rusty.