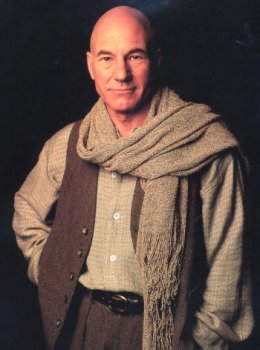 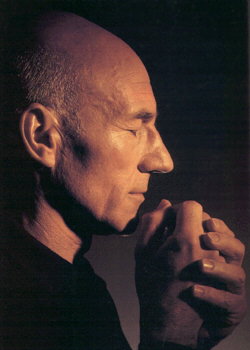 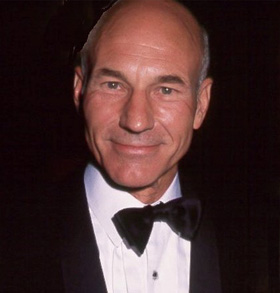 Hold onto your undies, girls (wait, is that too risque?), I've finally gotten around to featuring that gorgeous bald guy Patrick Stewart! Yes, it's true. After thousands and thousands (okay, more like dozens and dozens) of requests for Patrick, all of which got "I love Patrick Stewart! He's definitely on the list of future Boyfriends!" as a response, I have finally done the work, swiped the photographs, and gotten my rear in gear.

I hope you're happy!

And I'm sure you are. Because how could you not be? Aren't those great pictures of him? What a totally perfectly crafted face that man has. Even his wrinkles are arty. And that nose! That chin! That gleam on the top of his hairless head! I cannot resist! Every time I see Patrick Stewart walk on-screen, I get all fluttery, and that's before he's even opened his mouth!

After he says something, I virtually pass out (on the inside). Because you take those perfect intoxicating looks and add to them that delicate British accent, and BAM! what you have is: Meg knocked completely out. TKO. Down for the count. When Patrick Stewart speaks, I can't even make out the meaning of what he says. I'm too busy swooning.

Of course, those of you who know me know that isn't actually true (because if it were, you'd have to be realizing right now that it must mean I'm hardly ever conscious -- I'm pretty sure I say the same thing about EVERY Boyfriend, after all, and we all know I'm conscious at least MOST of the time because here I am, week after week, with my completely pointless web site (there you go, fan-who-wrote-me-last-weekend -- the point of this site is. . .there is no point! I told you it was complex!). No, but really, kids, you know I catch every word the man says. Why? Because everything I've seen him in (mainly Star Trek and "X-Men") has been so wonderful aside from him, I've been hooked by all the plots as well (not to mention some of his co-stars, like Aussie Hugh Jackman).

Now, tell me, does it get any better than that? Not only is the man absolutely breathtakingly gorgeous (what is it about bald men? they are all just so totally swoon-inducing) with a voice and accent that could melt rocks, but, by golly, he's damn talented to go with it! He's essentially the perfect actor (sans a few MacGyver points, of course). Looks, brains, talent, and sex appeal. Oh man, sex appeal, yeah. We shouldn't even get started on that one, lest we wind up banned from Bellevue high schools again. (Underwear! Underwear! Underwear!)

A little biography on Patty: he was born on July 13, 1940 in Mirfield, West Yorkshire. His hair started to fall out at age 19, but nobody noticed because of those incredible hazel green eyes strategically placed directly below his hairline. Not-so-coincidentally, just as his hair started to fall out, his serious stage career began to take off, with his first professional role as Morgan in "Treasure Island."

He was a member of the Royal Shakespeare Company for 25 years and considers both London and Los Angeles "home." In 1964, he met Sheila Falconer, a choreographer, and two years later they were married. As I'm sure you've heard, though, their relationship crumbled after 25 years and they divorced. Since then, Patrick has been engaged to at least two other women, and he finally got remarried (to the president of his production company "Flying Freehold," Wendy Neuss) last year. (Incidentally, he also has two kids from his first marriage, Daniel and Sophie.)

Patty's Star Trek career started when producer Robert Justman saw him at a dramatic reading at UCLA. He was so impressed by Pat's presentation, that he reportedly remarked to his wife "I think we've just found our Captain." Gene Roddenberry had his heart set on a Frenchie for the part (nuts!), so Patrick was originally assigned the part of Data (yee gads!). But Justman was convinced the Captain and Patty were one and the same and after a few months of stomping his feet, holding his breath, and sticking his fingers in his ears while chanting "la la la I can't hear you la la la," he finally convinced Gene he was right. The role was given to Patrick and then tailored to make both him and Gene happy (hence the French name, incidentally, Jean Luc). Today, Patrick says he had no idea at the time what all the hoopla was about. Little did he know that to many Americans, the man who sits in the Captain's chair on the Enterprise is more respected than the man who sits in the President's chair at the White House (and that goes double now that George Dubya's in office!).

It was Star Trek that really made Patrick Stewart a household name in the U.S. He won numerous awards for his part and was even voted "Most Bodacious Man on TV" by TV Guide (whatever that's supposed to mean). But despite his success as a sci-fi hero, Patrick has never given up on his classical roots. He still appears in Shakespeare plays regularly, and has done audio recordings of classical literature. He also enjoys acting in films and has made a number of television movies that have garnered him even more critical acclaim (most notably "Moby Dick"). On December 16, 1996, he was honored with a star on Hollywood's Walk of Fame.

All you ever wanted to know and more, huh? Know why I was able to find out so much information about this week's Boyfriend? Because we're not the only ones who think Patrick Stewart is a dreamy hunk from heaven, ladies. It's you, me, and about a bazillion other people (men and women), and we're all in agreement about this: Patrick Stewart is one of the finest actors we've got out there today. And he's most certainly in the top ten list of the best looking, as well.

Despite the fact I'm sure he'd really appreciate it if I said I loved him most for his Shakespeare, I have to say that it's really Captain Picard that gives me heart trouble. Picard is about as far from Captain Kirk as you can get -- not only is he intelligent, kind, sensitive, and courageous, but he also doesn't even need to tear his shirt every week in order to keep the girls coming back for more. My fiance hates it when I start thinking of television characters as real people, but I have to say, if I was asked this week to name someone I really respect, I just might answer with "Captain Picard" (granted, he's my Boyfriend this week, so he'll be on my mind a lot, but still. . .). Gorgeous and brave, loyal and bald, he's truly one of the most loveable characters ever to grace the television networks.

And, if you agree, then do I have some pretty great news for you! Coming up for Patrick Stewart is. . . the next Star Trek movie ("Star Trek X")! I can't find any information about it for you (like, say, a plot description), but I can tell you it is currently in production and is slated to appear sometime in the early months of 2002. And while "X-Men II" isn't currently in his list of things to come, I have no doubts a sequel will pop up sooner or later. (Which is also happy news, since Xavier ain't such a bad guy himself AND he's pals with Wolverine, who is a dreamboat.) Until then, folks, you and I both are stuck with reruns and video rentals. And the above photos. Which, argh, are really making it hard for me to concentrate this morning. Patrick Stewart, you are so cute you ought to be illegal.