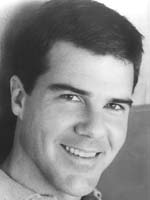 This week's Boyfriend is literally a last-minute thang. I had an entirely different Boyfriend planned for today (by the way, I like debuting these on Tuesdays better than Mondays -- I'm more awake Tuesday mornings. So, I'm going to stick to a Tuesday-Tuesday schedule unless enough of you complain. If I'm ruining your whole week, let me know. I'm here, after all, to serve YOU.) (p.s. I'm only kidding. You can complain all ya want but that's not going to change the fact I don't feel like doing all this work first thing Monday morning. Whose site is this, anyway?!)

Okay, wait a second, where was I? Oh yeah, the OTHER Boyfriend. He's a good one and he'll still be coming (and coming soon), but it's actually better that we wait for him because one of his movies is about to hit video and this will give me a chance to rent it. Of course, even more importantly, it's better because I wasn't feeling all that inspired about his write-up. And yesterday, as I was telling someone about this show I've gotten hooked on ever since its move to Mondays, I suddenly KNEW who was really supposed to be the Boyfriend this week. And that someone is: Paul Gilmartin.

"Who?" you ask. I know you're asking that, too, because just by taking a look at the PATHETIC pictures I found, you can see he's not the kind of guy who has two dozen "unofficial" fan sites dedicated to him and his every move. Instead, he's mostly a stand-up comedian. Who, lucky for those of us who don't hit comedy clubs often (er, or ever), he's also on television every Monday night. Is it a sit-com? Nope. Primetime courtroom drama? Nope. Reality show? Nope. He's the co-host of an extremely entertaining show called "Dinner and a Movie," which airs (usually in a double-feature these days) Monday nights starting at 5pm (Pacific) on the TBS channel.

The movie part of "Dinner and a Movie" is usually a film I've seen a gazillion times, like "Sister Act," or "Jaws," "Three Men and a Baby," etc. But I'm almost always perfectly happy to see them again. And, of course, perfectly happy to see them hosted by Paul and his lovely partner Annabelle. Especially since they not only share with the viewer witty commentary and interesting trivia about the film or its stars, but they also cook. That's the "Dinner" part of "Dinner and a Movie," ya follow? So, it's kind of like a cross between HBO and the Food Network, with a little Comedy Central sprinkled on top. Excellent combination!

Since Paul and Annabelle are both comedians, the menus are always pretty funny, too (to me, anyway). My two favorite dishes so far, ones that still make me chuckle, are:

Bah ha ha ha ha ha ha! Now whenever I get sick, I always say to my husband, "I can't go to work, I falafel." And, the thing I don't like about my husband (sorry, luf) that I think Paul would be much better with is this: my husband doesn't think the falafel thing is funny. I say it, I crack up, he stares blankly. I'm fairly certain, however, that Paul would laugh WITH me on this one (instead of AT me) and that, among other things like the fact he's darn cute, is why I love Paul Gilmartin sooooo much.

Actually, he's not only darn cute and much more likely to laugh at the same jokes as I do (especially since some of those jokes are HIS jokes), he's also smart. And smart and funny is a deadly combination for me. Add to this the fact he also hosts his own cooking show (I mean, sorta), and what you have here is a man I cannot resist. Sure, he's not exactly a chef -- I mean, he's kind of learning as he goes here -- but still, he clearly knows how to make all kinds of interesting things now. I, for one, would have no idea how to make falafel, for example. But I've seen Paul do it. With my own two eyes! And even though it looked about as tasty as falafel ever does (not a fan, I believe I mentioned that earlier), it was there right in front of me (well, okay, on television, I mean). And Paul made it. With very little help from Annabelle, I might add.

A little biography on our sweetie: he's a Phi Beta Kappa grad of Indiana University at Bloomington (see, he IS smart!), with a B.A. in Theater and Drama. Before he became a stand-up comedian, he appeared in a lot of plays, even studying at the famed Second City Theatre. Serious drama was fun, but not as fun as serious comedy, so he gave up that stage for the stages of various stand-up clubs around the county, eventually also making it to the stages of "Politically Incorrect," "VH1's The List," and "HBO Comedy Showcase." He's also done his fair share of writing -- has written for the Emmys and also for Dennis Miller (who said of Paul, "He's going to be one of the top three comedians in the country"). He also writes comedic poetry, samples of which you can read on his web site (see links below).

But clearly his best gig is on "Dinner and a Movie," for which he's been nominated for a CableAce award and which is in at least its fifth season at the moment. Rock on, Paul!

But the best thing about Paul is this: he has his own web site (see links below) and it's FULL of fun stuff (clips of him doing stand-up, some of his writings, etc. etc.). The only thing it lacks is recipes, which is something I'm SURE Paul will be rectifying just as soon as he gets my email. (Paul, babe, call me. We'll talk!). Oh wait, and the OTHER best thing about Paul? He's on television for four straight hours (double-feature, baby!) every Monday night on TBS. Gotta love a man willing to do that for his lady (moi). I even sat through "Joe Versus the Volcano" last night for him. So, tune in! TBS! 5pm Pacific time! I assure you, there's something for everybody on "Dinner and a Movie" (but Paul's mine -- you guys can have Annabelle).

Paul Gilmartin's Site
TBS's Dinner and a Movie site Back to my Homepage.