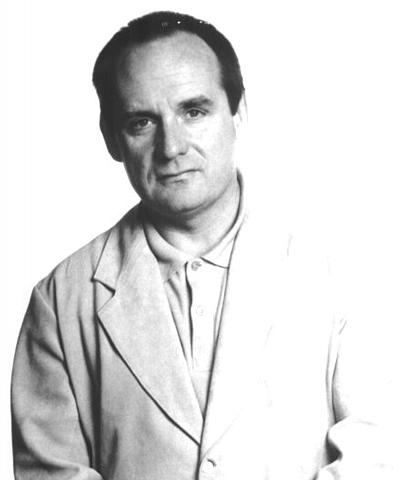 Well, it's about time we got back to this, huh? And I hope you're as excited as I am to have finally arrived here, at this place, to find the truth revealed. Because here, at long last, he is! The Mystery Boyfriend from CSI!

For those of you who guessed it would be the Grizzly Adams-esque medical examiner guy, by the way, I do have to give you some credit. I hadn't actually thought of featuring him, and THAT guy is COOL. For example, there's the fact that he has no legs. Bet you hadn't even noticed. Why? Because he's AMAZING. And then, of course, there's the fact that he's incredibly sweetly round and cuddly, complete with St. Nick facial hair and waistline. Who could resist someone so cool and cute who is also a medical examiner (did you know pathology was my main career goal for many years)? Not me, that's for sure. He'll totally be showing up here eventually.

But credit is due to you for that and that alone. Because alas, your guess, while masterfully intuitive (he's just so ME!) was nonetheless wholly incorrect. Only one person guessed the Mystery Man would be Jim Brass, known in real life as Paul Guilfoyle. One person out of dozens! And probably the reason for that is the same as the reason why Paul has been listed as a "Hey! It's That Guy!" actor on the fametracker.com web site (and compared, no less, in HITG stature to that other famous guy you know from somewhere, J.T. Walsh. Although, for the record, I loved J.T. and know who he is and will miss him now that he's gone).

Paul's been in a gazillion things, you see. And I bet you can only name one or two of them, despite the fact you've probably seen at least ten. Hey, don't feel bad. I was surprised to see how many things I hadn't remembered him in myself. And the reason for this is also the reason why I like him so much -- he's just so "regular guy." Know what I mean? He's isn't gorgeous and he doesn't really stand out. His characters tend to be the quiet types (even when he's a bad guy, he's rarely a stand-out baddie -- more a wallflower baddie). To me, he seems gentle and humble, kind and intelligent. You know, just based on what I've seen of him in movies, on TV, and specifically, on CSI. He's also got one of those faces. Those faces that really emblazon themselves on your brain (which is why you always recognize him, even though you can't place him). A soft face with a great, soft smile. And such a versatile smile, too. He can go from a faraway smile of serious contemplation to one of comic deviousness to one of complete happiness. Same smile, same face -- but something about the feelings he can radiate out of a single look gives it all so much character.

Gotta also love the fact that his characters tend to be a little sarcastic, too. And consistently. Which makes me wonder if maybe he's bringing a little bit of himself to his roles in that realm. Sarcasm is the smart man's dirty joke, you know. Sarcasm rules. It's the best. I like it.

Okay, so maybe you're still not convinced. Maybe this slightly heavy, slightly aged (pronounce with two syllables, puh-lease), slight balding (okay, seriously balding) quiet guy doesn't seem like my type. But hey, if there's one thing you should've learned by now, it's that "my type" defies pigeon-holing. It cannot be classified. Even Melville Dewey himself would be stumped (hah! Librarian humor!) (Get it? Classification? Dewey Decimal System?) (Oh, nevermind.) My type is Sock Puppet and Brad Pitt. It's Robbie Coltrane and Keanu Reeves. It's the gas chromatograph mass spectrometer (okay, not really) and Secret Agent Jack.

It is also Paul Guilfoyle. International Man of "Hey! It's That Guy!"

Maybe a quick refresher course would help? Some reminders of what you've seen Paul do on-screen? If you have time, check out his IMDB page (see Boyfriend-Related Links below) -- there are over 64 credits listed there. Some of the ones I've seen include: Beverly Hills Cop 2, Three Men and a Baby, Wall Street, Internal Affairs, Final Analysis, Mrs. Doubtfire, Quiz Show, Air Force One, Amistad, Random Hearts, and most recently, Session 9. And, of course, let's not forget my favorite Guilfoyle character so far, Captain Jim Brass on CSI. First of all, he's got an ironic name (you guys know cops are oftentimes referred to as "the brass," right?). But even better than that, Jim Brass has other endearing qualities. He's tough, brave, smart, and caring. And did you see the episode that featured his estranged daughter getting arrested for murder? How much pain he could express in a single look? It's hard for me sometimes to stop and appreciate how great an actor he is, for the simple reason that he's such a great actor, it's hard to forget he's only acting!

Dang, does it get any better than that?

Okay, a quick background check. Paul Guilfoyle was born on April 28, 1949 in Boston, MA. I couldn't find out much about his childhood, but I do know that he graduated from Yale University in 1977 after obtaining a degree in economics. And then promptly went straight into acting, the way all good economics majors do (?). He spent the next 12 or so years doing theater in both Boston and on Broadway in New York, before finally getting his first major film role, in the flop "Howard the Duck." After that, he was primarily cast in small supporting roles, but it didn't take long before people began to realize he was one of the industry's strongest character actors. He was frequently cast as shady lawyers, crooked cops, or gangsters (there's just something about that East Coast accent that screams bad guy, isn't there?), until the year 2000, when he was hired on to play a good guy on CBS's new hit drama, CSI.

And that's about all I know about Paul. Jim Brass, on the other hand, I can give you some trivia about. For example, he's divorced with a teenage daughter who thinks he stinks. He likes watching cable TV, eating Krispy Kreme donuts, listening to Liberace, and making friends instead of enemies (smart). He thinks Grissom is either a genius or a lunatic (or both), and his wardrobe primarily consists of suits, jackets, and pants, all in pretty nondescript colors and patterns.

CSI is on CBS, Thursday nights at 9pm. If you haven't seen it yet, dude, WHAT is your PATHOLOGY? Honestly. You might as well give up and tune in, by the way. Because you definitely haven't heard the last of that show on this site. Especially now that the spin-off (CSI: Miami) is about to start up. A whole new crop of smart, sexy crime fighters! Hot diggity!