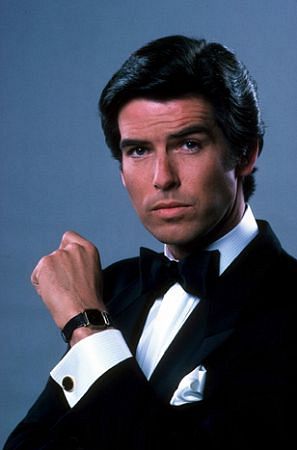 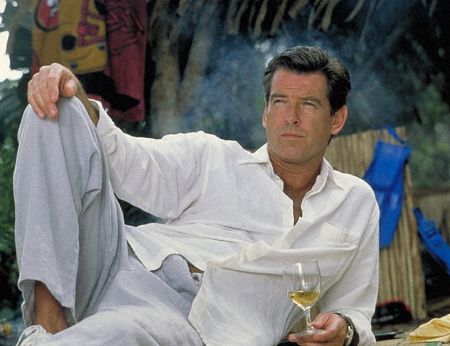 Last Tuesday, I was sitting around on my couch watching "Dante's Peak" on television (about the 6th time I've seen it -- love that movie) when all of a sudden, I realized, (holy frijoles!), I haven't made Pierce Brosnan a Boyfriend yet!

The shock! The horror! The embarrassment! What the heck took me so long? I can't believe none of you said anything! I've even been taping the occasional episode of "Remington Steele" off Pax TV (4pm weekdays) so I can watch it in the evenings. For months and months I've been doing that, completely oblivious!

Now, regular readers of this site realize, of course, that this kind of thing happens to me quite a lot. I'm going along listening to all of you talk about people like Rufus Sewell (yes, yes, I really WILL try to rent some of his movies soon!) and that dark-haired non-Brendan-Fraser guy in "The Mummy," and all this time, I've got these classic American heroes sitting around in the back of my brain twiddling their thumbs and waiting for their curtain call! Great Scott! First Patrick Stewart and now this! Pierce Brosnan is JAMES BOND, for Pete's sake (Pete and Scott!)

Okay, okay, though. I should just mellow out now. Because it's fixed. Pierce has made it to the majors and I can just stop panicking. The problem is, one has to wonder at this point just who else is in there? What other totally obvious Boyfriend-in-Waiting is sitting around in my head doodling and humming to himself while I wait for the right synapses to fire? It's a little freaky, people. It's like there's this whole Boyfriend section of my brain that I can't access intentionally. Like a repressed memory just waiting for a trigger. It's kind of freaky, to be honest.

But I'm going to stop obsessing about this long enough to tell you why I think Pierce is such an obvious choice. The reason is: Holy St. Patrick! (and Pete and Scott), is that guy gorgeous or what? I mean, when you look up "tall, dark, and handsome" in the dictionary (the Boyfriend dictionary, anyway), what you'll get is the following definition:

tall, dark, and handsome : adj. expression Meg uses all the time when trying to convince people that the Boyfriend she is featuring in any given week is the epitome of gorgeousness. i.e. Pierce Brosnan.

And then in the margin there by the entry will be a little tiny picture of Pierce Brosnan with his shirt off.

Can you picture that? I can. Why? Because I've seen "Mrs. Doubtfire" and the swimming pool scene. More than once. I don't watch that movie to see Robin Williams or anything crazy like that. I watch it because Pierce Brosnan does a lot of "Remington Steel"-esque smiling and removes his upper-body clothing for a few minutes while poolside. Even though he's a tad bit on the hairy side (though no match for Robin in that regard), I must say that is a set of biceps and pectoral muscles that cannot be ignored.

But enough about his body, for the love of Mike (Patrick, Pete, and Scott). The real reason to adore Pierce Brosnan has nothing to do with what he looks like (well, "nothing" is maybe a little extreme). Pierce Brosnan is simply one amazingly talented dude when it comes to certain types of parts (essentially, Remington Steele- or James Bond-type parts). And he has just an incredible ability to say even the silliest of lines with a completely straight face, which is more than I can say for myself. A prime example of this can be found in "Dante's Peak," during the scene in which he explains how a volcanic eruption can sneak up on ya by describing two ways to cook a frog. If you put a frog into a pot of boiling water, he says, it will immediately jump out. However, if you put the same frog in a pot of room-temperature water and then slowly heat it, the poor, dumb thing will remain in the water even as it is cooked to death. When another character says, "What's that? Your recipe for frog soup?" Pierce is able to reply, with a completely straight face (you'll need to read this with a British accent for full effect), "No, it's my recipe for DISASTER."

When I first saw "Dante's Peak" (at the old Bay theater in Ballard before it closed and then reopened as a modernized one), this made me and the guy I saw it will howl with laughter for so long the people behind us got annoyed. Of course, the more times I see "Dante's Peak," the more I truly love it. Corny dialogue moments aside, there's nothing like a pyroclastic cloud to make things interesting.

A little background on Pierce: He was born May 16, 1953 in Navan, County Meath, Ireland. At an early age, however, his father skipped out on the family and never returned (well, actually, he returned when Pierce was about 30 years old) (wouldn't you if you'd skipped out on a kid who later turned out to be James Bond?) (yeah, me too). Between the ages of four and eleven, Pierce lived with his grandparents in Ireland, but by age twelve, he had reunited with his mother in London (I'm not clear on why he wasn't living with Mom from the start, but it hardly matters at this point). Shortly after their reunion, however, Pierce dropped out of school (age 15) and left home to seek his fortune as, you'll never guess, a circus fire eater.

Eventually, he tired of devouring flames and found his way into the Drama Centre of London, where he studied for three years. He then spent several years as a relatively popular London stage actor (he was even selected by Tennessee Williams himself to recreate the role of McCabe for his play "Red Devil Battery Sign").

Pierce's transition to America came with a starring role in a television miniseries called "The Manions of America." He and his wife Cassandra stayed in Los Angeles for two weeks afterwards, where they intended to audition for more parts (Cassandra was also an actress). Brosnan got lucky when he auditioned for the part in a new television mystery series and got it. The series? Do you really even have to ask? It was "Remington Steele." But of course.

Just as "Moonlighting" made Bruce Willis a household name, so did "Remington Steele" bring Pierce to the nation's attention. About the time the show was being canceled (after four seasons), the makers of the James Bond series started looking for a replacement for Roger Moore. The public was allowed some input and overwhelmingly chose Pierce for the part. However, when NBC (the station running Remington Steele) found out Pierce was about to become JAMES BOND, they quickly renewed the show for another season, locking Pierce out of the part because of his contract. Timothy Dalton, lucky bastard, was awarded the role. He went on to make the least-successful two Bond movies ever.

Brosnan finished out his television contract and started doing some television and big-screen movies. In 1987, however, his wife of over 10 years was diagnosed with ovarian cancer. She fought as hard as she could for four years before succumbing to the disease on December 28, 1991. As she lay dying, her last words to Pierce were "always an actor." He took her words to heart and began to work towards a strengthening his career.

It didn't take much, though, because ten years after he'd originally been offered the part, Pierce Brosnan was finally made the new James Bond. And, as if that weren't a big enough career move in and of itself, his James became one of the most critically acclaimed of all time and is widely credited with reviving the Bond series, which had suffered dramatic blows after the Dalton installments. "Goldeneye" went on to gross $350 million worldwide. (A solid $15 or so of that came from me, incidentally. Proud to play my part.)

If you look back on Pierce's life, it quickly becomes obvious to those of us who believe in that kind of crap, that Pierce was destined to become James Bond virtually from birth. First of all, there's the uncanny coincidence that the day he moved to London was the exact same day that Bond creator Ian Fleming died. Then there's the weird fact that the first technicolor movie he ever saw was "Goldfinger." Next, he meets and falls in love with one of the most gorgeous Bond girls, Cassandra Harris (Countess Lisl in 1981's "For Your Eyes Only"). She introduces him to the Bond-film producer Cubby Broccoli (yup, that's his name!), and the Bond ball starts to role from there. If that's not kismet, I don't know what is.

After mourning the loss of his wife, Brosnan finally dug up his old bachelor sentiments (and/or swiped them from James Bond) and started putting himself back on the market, so to speak. After a few flings, he met and fell in love with a reporter from "The Today Show," Keely Shaye Smith. In January 1997, they gave birth to a son, Dylan, and in Fall of 1999, announced their engagement. They intended to wed in May 2000, but Pierce's son Sean was in a serious car accident that spring and the wedding was postponed. Don't get your hopes up too high, though, ladies -- Keely and Pierce had their second child last February. Methinks they are in this thing together for quite a while longer. The good news is, since just about every actor who starts out as gorgeous as Pierce Brosnan remains as gorgeous as Pierce Brosnan throughout the rest of their entire life, even when he's 90, he'll probably still make us crazy. So, if he can just hold out that long, we might still get our shot at wooing him. Me and Pierce, together in the old folks home, playing pinochle and ducking behind our walkers for a few smooches. Bliss!

If you've been watching prime-time television lately, chances are good you've already seen the trailer for Brosnan's next movie, "The Tailor of Panama" (co-starring Jamie Lee Curtis, it's about a tailor living in Panama (go figure!) who reluctantly becomes a spy for a British agent). After that, keep your eyes open for two more Brosnan movies, "Blood and Champagne" and the next Bond installment, "Bond 20." Until then, the name is Steele, Remington Steele. (Pax TV, 4pm weekdays.)