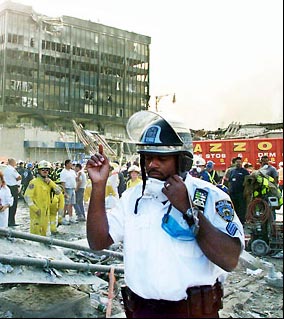 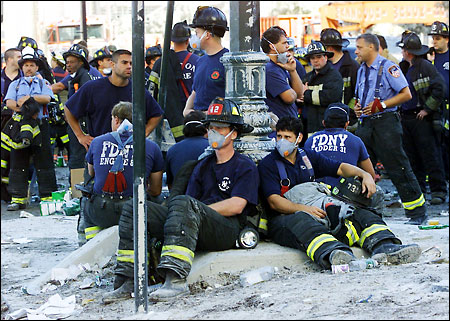 This week, the Boyfriend of the Week page is going to do something a little different. Instead of featuring a famous hunk from television or film, I'd like to feature two cities' worth of rescue workers and heroes -- the police, firemen, ironworkers and others from New York and Washington, D.C.

Because the images are still too fresh and the pain too sharp, I don't know how much I can really say about these people without losing it completely. But I have heard stories of rescue workers over the last week that have just blown me away, that make me ashamed that the most I could do from way out here was donate blood and money to the Red Cross. By Wednesday last week, it was taking every ounce of my resolve NOT to leap into my car and drive to New York City -- I was absolutely dying to help in a way more tangible. I would've given anything to move one piece of concrete, to hug one survivor, to take a cup of coffee to one fireman on a break. Instead, this is what I can do -- I can take a week off from my usual silliness here and tell you that I am in love with every single resuce worker on the job right now. Truly, madly, deeply in love with them all.

That's about all I'm going to say today. Even though nearly a week has passed, I'm still feeling too much of the pain to really talk about it. I haven't had a day yet that didn't involve a huge sob-fest. But I'll tell you something, while I can't really jump in my car and race to New York to hug a fireman, I did donate as much money as I could afford (well, slightly more than I could afford, actually) to the Red Cross. It's a small thing -- donating money -- when you compare it with the heroics of this week's Boyfriends, but it WILL make you feel better, I promise. The need for donations of blood or stuff like food, water, and clothing has passed, but the Red Cross (and other assistance agencies) can always use your money. If you haven't given yet, please do so soon. For information on how to donate (including a way to donate on-line), click here.