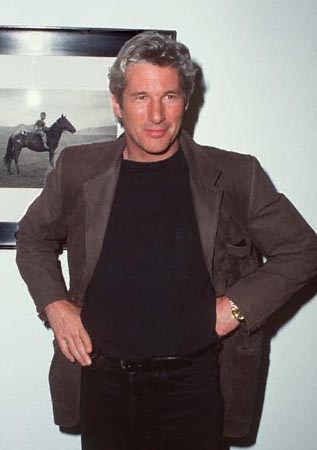 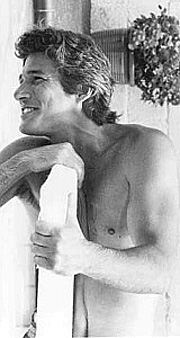 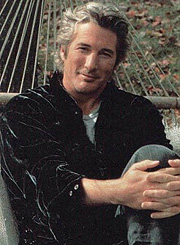 Anybody notice a trend settling in around here? The last few weeks, I've been featuring what I like to think of as "oldies but goodies" despite the fact I'm sure they don't appreciate that. First we had Patrick Stewart, then I realized I'd somehow missed Pierce Brosnan, and now to round it all out, I've decided it's time to slap Richard Gere up here. It's been one familiar face after the next -- kind of a little vacation for me, really. Because convincing you guys that Richard Gere is a cutie just isn't going to be all that difficult. At least, not if you are human. And female. And alive. (In that order.)

I've had a thing for Richard Gere ever since I was in the seventh grade, which is when I first saw "An Officer and a Gentleman." While, granted, part of the appeal of the movie at the time was the fact that I was absolutely NOT allowed to be watching it (don't you love it when your folks go out on a day-trip?), it's also true that I wasn't too young to appreciate a cute faced and very talented actor. "An Officer" is a movie about a couple of military trainees at boot camp, true, but it's also a love story of exactly the type most little girls dream about night and day. It's not until we're older that we finally realize it's kind of silly to wish for a husband who is that big of a pain in the arse all the time. Though by then, the vast majority of us have already fallen madly in love with a difficult male, and it's a realization that comes far, far too late.

Go ahead, blame Richard Gere for it. I sure do.

At the same time, though, I have to admit that falling in love with a male who is a complete emotional screw-up does indeed have its pluses. While they can be dark, moody types, they also tend to be the kinds of guys who really do march into your workplace and sweep you off your feet at the end. And that sort of rescue definitely makes up for all the times you wanted to kick them in the rear and tell them to get the heck over it.

Since my seventh grade days, I've gotten to know Richard Gere a lot better. He's played a variety of parts in a variety of films, though his best roles all tend to be the same Officer/Gentleman-type characters. Think "Pretty Woman." Think "Red Corner." Think "Sommersby." Heck, think "Primal Fear." While he isn't the same kind of person in all these movies (he is: a wealthy corporate guy, an imprisoned executive, a war hero/farmer, and a lawyer), his character is the same. Troubled. Dark. Argumentative. Quick to anger. And completely irrisistibly charming.

What is it about Richard Gere? What is it that makes us so nuts, even though he's exactly the kind of hand-full man we all ought to know better than to get mixed up with? I'll tell you. First, it's the eyes that get all crinkly when he smiles. Second, it's that incredibly sweet and honest smile itself. What do I mean by honest? I mean that Richard isn't one of those Brad Pitt-types who slaps on a smile for every occasion, and for that reason, a crinkly-eyed grin from Rich is worth about a dozen gorgeous-yet-automatic Brad-smiles. While I'm certainly not saying a Brad Pitt smile isn't enough to give me girly swoon giggles, I'm definitely attempting to tell you that a Richard Gere smile hits me even lower. Brad Pitt makes my stomach flip. Richard Gere makes my knees wobble. You know what I mean?

Of course you do. You've been reading this site long enough to know the difference between a stomach flip and a knee wobble. It's the difference of about, say, 3.2 MacGyver points.

Anyway, back on track now. A little background about Richard: he was born on August 31, 1949 in Philadelphia, PA (about 30 minutes from where I graduated from high school, incidentally). At a very young age, he discovered music and gymnastics (not at the same time) -- two things that eventually became extremely significant in his life. No, not because he went on to join the circus like some others of our Boyfriends (for that, he would've indeed needed to combine the flips with the bongo drums). Instead, it was a love first for gymnastics and then for music that ultimately led Richard down the right yellow brick road. The one that led to Tinsel Town and the big screen (and thus, right into our hearts).

What the heck am I talking about? Okay, well, first Richard got really serious about gymnastics. By the time he hit high school, as a matter of fact, he was so good he was offered a full scholarship for the University of Massachusetts at Amherst (about an hour from where I started high school, incidentally) (kismet!). So, after getting his diploma from North Syracuse High in 1967, he headed on over to Amherst and quickly enrolled in the philosophy department. After two years, however, he came to realize that neither cartwheels nor Socrates were really his "thing" anymore.

So, Rich dropped out of Amherst to pursue what he'd decided was his true passion: music. He moved to Vermont to join a "rock and roll commune" (I'm not sure what that is, exactly, but since it was the 60's, I think it's probably safe to assume it involved a lot of marijuana and Jimi Hendrix). If you're a fan of Richard's films, you already know that he is an extremely talented musician. For example, we heard him play the piano in "Pretty Woman" and the trumpet (LOVE the trumpet!) in Francis Ford Coppola's "The Cotton Club." Richard also plays the guitar and bass and is a proficient and prolific songwriter/composer ta boot!

However, after an even shorter time at the commune, Richard again came to the realization he was pursuing the wrong dream. He had become involved with some local theater groups and enjoyed it so much he decided to try drifting down to New York City to try on a new hat -- stage acting. He performed in a number of plays but it wasn't until he was cast as Danny Zuco in "Grease" that people really began to take notice of him. Pretty soon, he was showing up in ex-Boyfriend Sam Shepard's plays, a sure sign of stardom in NYC, and it wasn't much longer before he landed his first screen role -- a shellshocked soldier in the film "Baby Blue Marine."

The very next year (1977), Richard was cast as Diane Keaton's handsome, high-risk pickup in "Looking for Mr. Goodbar," and it was that role that really brought him to the attention of American females everywhere. A few years later, he gave an award-winning performance as a homosexual who tries to survive his internment in a concentration camp by pretending to be a Jew in the stageplay "Bent." That role proved his talents once more and he was soon cast as the romantic lead in our favorite, "An Officer and a Gentleman."

Unfortunately, after he became a household name (at least in the houses of swooning women), he went right on to make a string of dogs. It wasn't until "Pretty Woman" that he really made a come-back. And you all know what's happened to Richard from there. A string of great movies such as "Primal Fear," "Sommersby," and "Red Corner," as well as a few more stinkbombs like "Runaway Bride" and "The Jackal." Most recently, Richard starred in "Dr. T and the Women," which is a movie you'll really enjoy if you are a fan of Robert Altman movies, and a movie you'll really hate if you are not (as is usually the case with Robert Altman). Nevertheless, Richard continues to both wow and woo us on the big screen, and the older he gets, the better looking his hair becomes, so I think it's safe to assume he's going to be around for quite a long time. Yay!

But Richard isn't all film, as I'm sure you're aware. He's also incredibly active in politics, focusing especially on human rights issues in China (in fact, he was banned from the Academy Awards for making anti-China comments while acting as a presenter). He's also personal friends with the Dalai Lama, which is something I'm sure very few of us can say for ourselves!

As for his romantic life, we have all heard the nasty rumors about his relationship with Cindy Crawford. Happily, they finally divorced several years ago and Richard has since been dating the sweet and lovely Carey Lowell (from "Law & Order"). Well, "dating" is probably not the best word I could use to describe their relationship since the two recently had a son. (Let's hope, anyway, that they are slightly beyond "dating," right?) So, as usual, the Boyfriend this week is already taken by someone I highly approve of. But, also as usual, I do not feel this is an excuse to give up hope. One never knows, you know. Does Carey Lowell eat a lot of trans-fats? Does she have a family history of heart disease? If you answered "yes" to either of these questions, then you know that I might still have a shot at Richard. Someday far, far in the future when we're hanging out together at the old folks' home eating soft foods and complaining about "the kids today." Sigh. Can't hardly wait.

Next up for Rich are two movies, "The Mothman Prophecies" (a sci-fi movie about an alien invasion) and "Unfaithful" (a non-sci-fi movie about infidelity). Of the two, I'm sure you know me well enough by now to be able to predict which I'm more likely to shell out the full $8 for at the theater (go, mothmen!). But I'm sure both of them will be good. And besides, since when have my standards been all that high? I AM the one who's seen "Dante's Peak" a dozen times, after all. So, keep an eye out for Richard in the future and in the meantime, hit your local video store for some rentals. If you haven't seen any of the movies I listed earlier, you're really missing out. And here at the Boyfriend of the Week, there's just no good excuse for that kind of behavior!