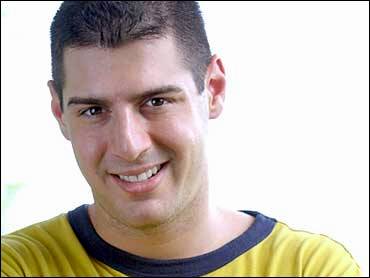 Another season of Survivor just ended and I went the entire time without making a single contestant a Boyfriend -- weird for me, since it's not like there wasn't plenty of precedence (see Jake Billingsley, Ethan Zohn, and Colby Donaldson) or plenty of cute guys this season in the Amazon. But even though I will admit to a small crush on Dave the Rocket Scientist, his personality was a bit on the nod-zzzzzzzz. . .side of things. And then he got voted off. And pretty soon, I was far too busy snorting at everything Heidi and Jenna said to really notice anybody else (I loved it when Heidi said, "All I've got in this game is my athletic ability and my intelligence." Bah ha ha ha ha! And then her IQ turned out to be higher than Dave's! Which tells us absolutely everything we ever needed to know about how totally useless the IQ test is at actually measuring intelligence. No offense, Heidi! At least you've still got your boobs, right?)

Anyway, catty girl stuff aside (sorry about that), despite the fact I found the women on the show to be highly entertaining, when they weren't driving me bananas, I kind of glossed over all the guys. Except that's not actually true, come to think of it. Because there was one guy who kept me watching -- and laughing -- through every single episode this season, despite the numerous times I threatened to give up on it for good (please, I can't take another emaciated woman taking her clothes off on television for food -- it's just. . . too. . .ick). He wasn't the cutest guy. He wasn't the smartest guy. He wasn't even the tallest guy.

But he was the most clever. The most devious. The most hilarious. And also, the most thoroughly entertaining.

Rob Cesternino was that guy. And from the very first episode, he had me snickering, snorting, and shooting water out of my nose. Well, okay, not really that last one. But there were a couple of times when, had I been drinking at the very moment he spoke, that might have come true. Because Rob is the most Guy guy I have ever encountered on primetime television. The most unabashedly Guy guy ever to grace the CBS network. The most nose-pickin', girl-oglin', self-serving, hilariously uncouth Guy guy ever to compete for the title of Sole Survivor.

I just loved him!

And, I was rooting for him like nobody's business there at the end. Royally disappointed when he failed to make it to the final two, and even more disappointed when he failed to win the million bucks. But, actually, something about Rob makes me feel like that loss is likely to be okay. Probably the sense I get from him that he isn't quite done going through his bag o' tricks yet.

In fact, I predict some kind of Rob Cesternino Comeback coming soon. Like, say, a talk show. I would watch a talk show hosted by Rob. And I don't even LIKE talk shows.

At the very least, however, Rob needs to be one of those Survivor contestants who keeps popping up at random in things. Like Jerry -- remember Jerry? The curly-haired uber-bitch who wasn't funny or cute or anything? If she gets to keep showing up on the E! channel hosting various things or ending up on shows like "Surreal Life" with Corey Feldman and M.C. Hammer, then by golly Rob ought to be able to make a living the same way. I mean, had it been Rob instead of Jerry living in that house with those old 80's celebs, I might not have gotten bored quite so quickly. Can you imagine Rob's retort to Corey's claim that eating animals was evil, but wearing leather shoes was. . .

Oh, forget it. Better that we don't get started on that one. Poor dumb Corey Feldman. I feel bad for him.

Anyway, Rob rules. And that's actually all the commentary I think I'll make on this. Know why? Because I got email yesterday from a reader who pointed out that I had Ted Levine's MacGyver Factor Score written out twice in his write-up last week, and the two paragraphs even had two different rating numbers in them. No biggie -- not the first time that's happened and surely not the last either. The difference this time, though, is that Ted's write-up was up for about 9 days and I didn't hear about this error for 8. Which means one of two things: 1) you were too polite to point it out (hah, yeah right! YOU guys?!) or 2) nobody is reading all the way to the bottom anymore.

I'm inclined to believe number two and, while I'm at it, also willing to admit that as of late, I have had a great deal more to say than usual. I apologize for my verbosity. My verbosity knows no bounds. But I figure a shorty this week might go a long way towards balancing things out. (Sorry, Rob, that "shorty" comment was not really intended to be another little jab at the fact that you are somewhat y-axis-ly challenged) (y-axis-ly = poetic adverb license, so shuddup).

In the interest of brevity (a new interest for me, actually), I'm not even going to use paragraphs and complete sentences while we go over Rob's biographical information. No, no, why make you slog through all the tedium those extra articles and adjectives and such create? In fact, while I'm at it, I'll just take the vowels out too. Because, really, who needs 'em? They just bog things down. And hey, whatever I can do to save my readers some precious time. . .

Fvrt Hbbs: tllng jks, wtchng sprts, krk (karaoke -- hard to spell without vowels, actually, and while we on the subject of karaoke, let me just say that I have a feeling Rob is very entertaining in karaoke bars).

Oh, this is just too hard. You're just going to have to give up and read through the rest of this the normal way. Rob was born on October 20, 1978 and currently is living with his family in Wantagh, NY. He is a major baseball fan (the Mets, thank god) (I can't handle Yankees fans -- go Mariners!) and loves to swim, hike, play video games, and drink gin and tonics. Hey! Me too! The gin and tonic part anyway.

There is lots of trivia about Rob available at the official CBS Survivor site (see Boyfriend Links below), so I'll just let you head on over there if you are interested in knowing more. And if you email me about this write-up, which I hope many of you will because I love to chat about Survivor with complete strangers, please include the word "kookamunga" in your message so I know you actually read down this far. Anybody who does not include the word "kookamunga" will have their message immediately deleted and their name added to the "This Reader Stinks" list along with all those people who sent me death threats after the whole Bam Margera fiasco.

And Rob, if you're seeing this, let me just say one thing to you personally: ROCK ON!! And also, if you're ever in the Pacific Northwest, look me up!

The Rob Show (Rob's personal web site)
SurvivorHunks.com page on Rob
The Official CBS Survivor: Amazon site
Rob's IMDB Page (not a lot to look at right now, but just you wait!)
Back to my Homepage.