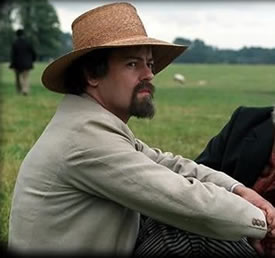 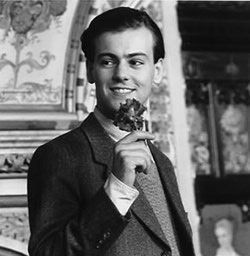 Note: image on left copyright 2002 / 2003 Granada Media, in association with Rupert Graves Online, the Official Website. http://www.rupert-graves.com. It is used here with permission.

Well, here we go again. I had, once again, totally intended to feature a cast member from "Band of Brothers" this week (if only to stem the tide of emails that start with "What happened to your promise to feature more guys from 'Band of Brothers'?!") when I was absolutely blindsided by another Boy in another show set in another country.

This time in particular, it hit me when I least expected it. I've recently been watching a lot of episodes of the British mystery series "Inspector Morse," and have been thoroughly enjoying them and quickly developing the crush to end all crushes on John Thaw, who plays Morse. Yet, depressingly, I've come to this affection far too late, as Thaw died a couple of years ago, before I really even knew who he was.

So, I watch these episodes with a tinge of sadness, and usually only notice the main characters, Morse and Lewis, both of whom are absolutely delightful in their own very different ways.

It's been amazing to watch the episodes, actually, many of which are now available on DVD at Netflix.com, the greatest lazy persons' movie rental site since Kozmo.com went kaput. The episodes have featured a wide variety of well-known British actors, and two were even directed by "Trainspotting" and "28 Days Later" director Danny Boyle. It was with heavy heart that I popped in the last one I had out from Netflix this past weekend, knowing it could be several months or longer before another batch was released (7 episodes just came out a few weeks ago, bringing the total on DVD to 13 out of a total of over 38. A handful of others I have seen on VHS or in reruns on A&E, but I definitely have not come close to seeing the full set yet).

When the opening credits of "Happy Families" started rolling, I was surprised to see a familiar name, Rupert Graves. Yet, despite the ringing bells, I couldn't remember how I came to be familiar with that name. When his character, an unscrupulous reporter (is that an oxymoron?), first came on screen, I recognized him immediately, but couldn't for the life of me remember where else I'd seen him. At first I thought I might have confused his name with that of Rupert Everett (who co-starred with Colin Firth in "The Importance of Being Earnest," a truly delightful film), but dang it, I just knew I'd both seen and heard of this guy before.

So, of course, I promptly put the movie on hold and ran to my computer. Ah ha! The eyes -- I knew I recognized those EYES! Rupert Graves is none other than Jolyon Forsyte from the recent PBS remake of "The Forsyte Saga"!

If we apply the "six degrees of separation" theory of relationships to this write-up, by the way, it's safe to say featuring Rupert Graves isn't much of a leap away from featuring someone else from the "Band of Brothers" series. After all, his co-star in "Forsyte" was Damian Lewis, the star of "Band of Brothers," who I featured a couple of weeks ago. So, really, you guys can't complain TOO much about the delay again this week. I mean, I'm sure you WILL complain too much. But when you do, I reserve the right to plug my ears with my fingers and sing "La la la! I can't hear you! La la la!" Because, hey, close enough, okay?

Besides, those eyes make it well worth the timeout, in my opinion. When I first saw "Forsyte," actually, it was Jolyon I had the crush on. He was a romantic. He left his stifling wife and ran off with the exciting governess, even though it meant a loss of his good name and his fortune. He moved to the country, grew a beard, and spent a lot of time sitting around in fields with the sheep, wearing sassy straw hats and looking content and mildly contemplative. Such an appealing combination of sights, sounds, and smoochability. The only strike against him, in my book, was his growing appreciation for Irene, who I still think could greatly benefit from some kind of surgical procedure to remove the stick from her backside and the self-obsessed angst from her face. Cold, detached, selfish. Jolyon could do SO much better. In fact, what they really need to do in the sequel is branch out a bit from the books' plots and write in a new character. A young, lovely, lively librarian named Meg, for example. Could really do wonders for the storyline. Especially if they also bring back Ioan Gruffud's character from the dead and feature some kind of burning love triangle thing.

But anyway, that's a fantasy for another time.

Rupert's role in "Happy Families," the Inspector Morse episode, is absolutely delightful as well, by the way, and if you haven't yet experienced Inspector Morse, and you like British mysteries, beer, and crossword puzzles, I sincerely hope you will give it a try soon. The Inspector is actually a bit of a stodge (which is a word I'm actually using incorrectly here, as it really means "a heavy filling and often starchy food," but I like the way it sounds so let's start a trend) but he's also clever, witty, and a well-balanced drinker. As well as an intellectual, of the slightly snooty variety. You can see how we would've been perfect for each other.

But for all my appreciation for the ol' Morse character, exposure to Rupert Graves and his dark, drinkable eyes totally threw my focus out of whack this last time around. I couldn't even tell ya what the plot of that episode was. All I really remember is that Rupert's character was an extremely devious bastard, in the kind of way that makes it impossible not to absolutely love him. He's a troublemaker, but he's just having so darn much fun riling the coppers up that you have to laugh, even when he has the audacity to accuse Morse of incompetence. Also, he gets to grin deviously quite a bit, which is just so dang attractive I could hardly stand it. His eyes literally twinkle when he smiles deviously, just like he was a cartoon character. I can't picture his face in that episode without cracking a bit of a smile myself. Just very, very entertaining. And also very, very, very cute.

For those of you who hate British mysteries and aren't much for period dramas either, there are unfortunately few other options if you want to see what all the Rupert Graves hubbub is about. He was in the movie "Extreme Ops" (note the use of the term "movie" and not "film" here, please), which has something to do with terrorists and "extreme" snow-related sports. But if you take a close look at his filmography, you'll quickly see that that's about it, in terms of "flicks." And, frankly, it looks like an unbearable dog.

However, that's hardly a reason to criticize -- a lack of unbearable flick dogs on one's resume is generally considered to be a good thing, after all. And besides, he's been in a number of "films" based on classics, especially classics written by E.M. Forster, whose novels I am a big fan of myself. Rupert started off with "A Room With a View," moved onto "Maurice" (co-starring Hugh Grant), and then hit "Where Angels Fear to Tread" in 1991. In addition to the Forster "Film" Fest, he was also in "The Madness of King George," which I heartily recommend, and the 1997 version of "Mrs. Dalloway," which I heartily do not recommend. Rupert also had a small part in the movie "Bent," which is an extremely good, but very depressing movie about a gay man in a Nazi concentration camp (starring ex-Boyfriend Clive Owen, by the way).

You can see from this list that Rupert obviously has standards. And they are standards I can really get behind. I can't help but wonder if taking the part in "Extreme Ops" was a bit of an attempt on the part of his agent to increase his exposure in the U.S., actually. He's clearly had a strong career, but despite that, nobody really knows who he is. And I can definitely understand why he might desire to do something about that.

Unfortunately, and this is a lesson I want you all to take note of: one should never pick movies about terrorists and snow-boarding when one is looking for a way to move up in the world. Please, write that down and put it someplace safe. It'll really do us both a lot of good in the long run.

Then again, Graves obviously learned from his mistakes, because a quick look at his IMDB page reveals that he is currently filming another period drama type of miniseries, this time for A&E and the BBC. It's called "Charles II," and will be about Charles II's time on the throne, his ten-year exile from Oliver Cromwell's England, and his triumphant return after ol' Ollie lost his head. Rupert is also very active in the theater world in England, incidentally, and will be performing in a stage production of "A Woman of No Importance" by Oscar Wilde in September in England. Not that I have a chance in heck of seeing this production. But some of you who live a bit closer might (and, if you do happen to see it, and then later you run into Rupert on the street outside, do give him my URL, won't you? Or heck, better yet, give him my phone number and a $20 bill for the long distance charges. It's going to be a long conversation.)

So, things look good for Rupert's career. Especially now that all of you guys know to look for him when he shows up in things. Not that he's hard to avoid noticing. One look at that hair, those eyes, that smile, not to mention one listen to that totally charming accent of his, and I assure you he will be the only thing you notice. And that goes double for when he's wearing cute li'l Brit costumes and running off to the country with the hired help.