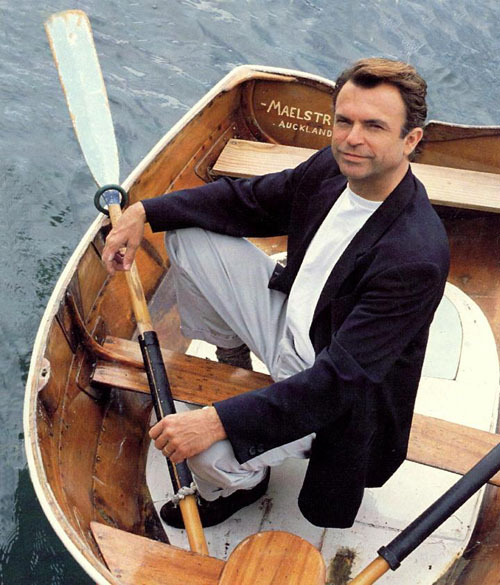 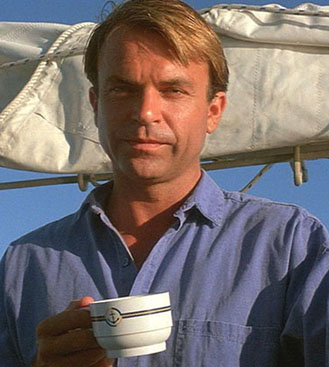 Anyway, Sam Neill has been someone I have really liked for a long time. And I get about one request every two months for him and always think, "Yeah, I should do Sam Neill sometime" and then promptly forget about it. As so often happens. But then, oddly enough, all in one week, three Sam Neill movies came on television. And by the time I'd hit the third one, I knew the Boyfriend Diety was giving me a sign. Sam Neill or bust, she was saying. About as subtly as a chainsaw.

The first movie was what is, perhaps, my favorite Sam Neill movie of all time, and not just because it also stars ex-Boyfriend Jeff Goldblum. That movie is, of course, "Jurassic Park." Now, unless you live on the Planet of the Totally Clueless, you know that "Jurassic Park III," also starring Sam, just came out in theaters. And, if you know me, then you also know I still haven't gone to see it. I have no doubts that I'll enjoy it, though I'm also pretty sure I'll still like the first one better. What was great about the first movie was the surprise -- the feeling of "Oh my god, those really look like DINOSAURS up there! And, ew ew ew! They're EATING PEOPLE! (cool!)." By the second movie, that was numbed somewhat and I figure by the third movie, what will be more surprising is that those morons are still going back to that damn island even though they are fully aware that people KEEP getting eaten there ALL THE TIME!

But even that kind of awareness isn't going to stop me from having my fun, especially since they brought Sam Neill back into the series (I missed him and also Laura Dern in the second movie). And even though I totally disagreed with her about the movie, "A.I.," I was excited to see that one of my favorite movie reviewers The Flick Filosopher said she loved it even though she recognized at the same time that it was a stinker. I feel that way about many of my favorite movies. So, it's an emotion I trust fully.

The second movie that I ran into last week was "Restoration." Though I had heard of this movie, knew it had won some Academy Awards for costumes or something, and also knew it starred Robert Downey Jr. (who will one day be a Boyfriend, even though he'll always love his cocaine more than he loves me), I had never rented it just because something about the combination of RDJ and Meg Ryan just really made me sense it was going to suck big-time. But I figured, hey, it's free, why not watch it? The good news is, Sam Neill is in it and he's kind of funny. The other good news is, I was right -- it sucks big-time (I hate being wrong, so that actually IS good news, even though it seemed like bad news at the time). I didn't even get to the part where Meg Ryan shows up -- I was too annoyed by RDJ to get that far. He just looked ridiculous in that wig, I guess. I couldn't take it. But Sam was okay (though also looking ridiculous). No, I'm actually just saying that to be nice. Sam stunk too. The whole movie stunk. Oh stop, let's just change the subject now.

When the third movie came on television last Saturday, that's when I finally realized I was getting a sign. That movie is my second favorite Sam movie, "Dead Calm." If you haven't seen "Dead Calm," then I envy you, much in the same way I now envy all those people who haven't read The Lord of the Rings trilogy and have just started because they heard the movie is coming out soon. You guys are in for a real treat. "Dead Calm" is a terrific thriller that is set on two sailboats (one sinking) in the middle of nowhere. It's scary, it's suspenseful, it's freaky, and it's absolutely packed with cute guys. Well, "packed" is probably the wrong word, since there are only three humans in it (and one dog) and only two of them (the humans) are men. But not only do we get Sam Neill (wearing lots of blue -- his best color), we also get Billy Zane, who is another future Boyfriend, just as soon as I can get myself to forgive him for "Titanic."

So you see, after all that, there was just no way I could NOT make Sam Neill the next Boyfriend of the Week. And while it's late by a week, I'm sure the impact on youse guys will still be the same. Time to go rent "Jurassic Park" again! Because not only is Sam Neill a very talented actor (from dino-scientist to Russian sub guy, to Merlin, and back to dino-scientist!), he's also cute as the dickins (not the Charles Dickins) and, topping it all off, strikes me as a supremely gentle person. Even when he's playing a bad-ish guy (see "Restoration" and "The Piano"), he still seems kind of soft and friendly to me. I think it's that twinkle in his eye. Or the slightly-crooked smile. Or the toooootally sexy Aussie/Kiwi accent. Or, actually, no, this is it: it's his hands. He's got those thick, stubby, warm hands that I love so much (so much, in fact, that I'm marrying someone with hands just like 'em). When Sam Neill touches someone, it's a touch that just radiates gentleness. His hands make him seem like he's the caretaker type. Almost fatherly, except that's not a description we like to use here at the BOYFRIEND web site. Gentle. Kind. But firm and directing too. Like you don't have to think about anything anymore -- just trust the hands and the direction they're nudging you in. Know what I mean?

A little biography about Sam: he was born on September 14, 1947 in Omagh, North Ireland, to a New Zealander father and a British mother. His name isn't really Sam Neill, though, it's Nigel Neill. But when he started school, there were so many other Nigels in his class, he took on the nickname Sam (now, how he got the nickname "Sam" out of "Nigel," I'll never understand, but let's not look the gift horse in the mouth, okay?). Actually, his reason for the change is slightly more believable. He says, "I encouraged the nickname [Sam] because I thought I'd be slightly less likely to be victimized during the tender years. . .Nigel was a little effete for the rigours of a New Zealand playground." Hey, I hear ya. If my name were Nigel, I'd be jumping on the name-change train myself. Anyway, it was a good choice because if anyone ever looked like a Sam, it's Sam.

After college, Sam toured with an acting company called the "Players Drama Quartet." He soon began to work with the New Zealand National Film Unit in Wellington, where he directed mostly documentaries (with titles like "Telephone Etiquette" and "Architect Arthfield" -- yikes). After six years with the film unit, he landed his first lead role, in the film "Sleeping Dogs," which also happened to be the first New Zealand movie ever to be released in the U.S. His performance got the attention of an Aussie casting director, who encouraged him to audition for a part in "My Brilliant Career." He got the role and promptly quit his day job, put his house up for sale, and moved to Australia. (Bravo!)

Soon Neill was acting in small Aussie films left and right. But he was also doing some small television projects as well. It was one of those that got the attention of Brit actor James Mason, who recommended Neill for the lead in "Omen III" (lucky Sam, heh) and offered him a ticket to London to audition. Neill got the part (mais oui!) and "Omen III" became his first-ever truly American film. During the course of filming, he also fell in love with the leading lady, Lisa Harrow. Though the two separated after a few years, they did have a son together, Tim. It was during this time that Sam also took on his most famous role, that of Sidney Reilly in the TV series, "Reilly: Ace of Spies." It was a series that was shown originally in the U.K., but when it played on PBS' "Mystery," Americans who had somehow missed him in Omen III (heh, again), sat up and took notice.

It was then that his career finally began to take off. He made a string of relatively successful movies, like "Jurassic Park," "The Piano," "Dead Calm," "The Hunt for Red October," and "The Horse Whisperer." (I am intentionally leaving out the movie "Event Horizon" from this list, by the way -- why? Because it's a stink bug!) Recently, he also starred in the critically acclaimed television miniseries, "Merlin," which I somehow totally missed. He's also popped up in some other television movies, like "Sally Hemmings: An American Scandal" and "Submerged," which is reairing this Tuesday on one of the cable channels (TNT?). Don't miss it!

In early 2000, right when the buzz about Jurassic Park III started up, Sam Neill's vineyard (yes, you are reading that correctly), "Two Paddocks," released its 1998 vintage of Neill Pinot Noir. Now, if his good looks, charming accent, and talent on the big screen weren't enough to seduce you, does it help now that you know he has his own vineyard? Yeah, I thought it would. The bad news is: this first vintage was so successful domestically, there wasn't any leftover for export to the States. You see? This is why I need to live in Australia. (Well, this and also the fact that ALL the people there talk just like Sam Neill does -- hubba hubba!).

But life is not all wine and dinosaurs for Sammy. He's got three movies currently in the works. The first, which is also the most promising-sounding, is called "The Zookeeper." In it, Sam plays an eastern European whose boring life as a custodian at the local zoo takes a sudden turn when an imposing civil war causes the staff of the zoo to flee, leaving him in charge of the whole place. Sounds intriguing, don't you think? And at least it still involves large predators, though I'm sure none of them have cool names like, "Velociraptor." After that, we'll see Sam in a documentary called "Space," which is, I'm guessing, about space. And then a television movie called "Framed," which also stars Rob Lowe (a future Boyfriend himself) and appears to be a movie about a bank job gone wrong.

So, keep your eyes open and watch for these things to show up -- with Sammy at the helm, you don't want to miss the boat! And make sure you pay attention to what he does with his big small hands, his twinkly eyes, his crooked smile, and that little wayward curl he's got in the corner of his bangs. It's not just the talent that makes him a fine actor -- it's the way he uses all his irresistible little traits to woo you right off your feet. Would you pay full-price for that? Yep, me too. Especially if it also comes with a side of T-Rexes.

The Official SN Site (the only one you need -- it's got everything!)