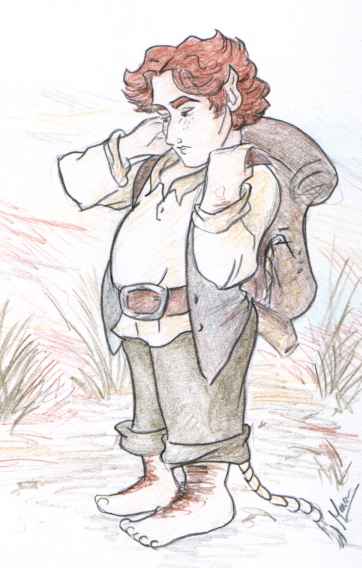 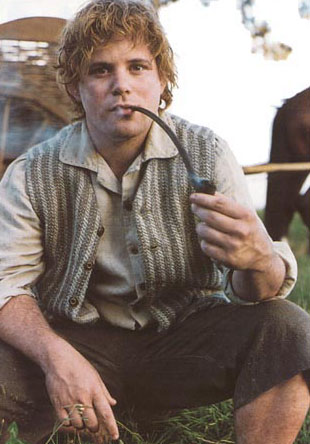 Please note: this write-up contains some information about "The Fellowship of the Ring" that might be considered "spoilers" by people who (gasp!) haven't read the books or seen the movie yet. If you fall into that category and you are likely to get cranky if someone says ANYTHING about the storyline, please read no further. I'm SO not in the mood for cranky emails today.)

Happy New Year, everybody! And what better way to start off 2002 here at the Boyfriend of the Week than with a write-up that constitutes a bit of a departure from the norm -- a fictional character! Yep, this week's Boyfriend wasn't even available in 3-D until last month, when ex-Boyfriend Sean Astin made Samwise Gamgee come to life in the amazing new film "The Fellowship of the Ring."

Really, though, if you think about it, almost ALL the Boyfriends are actually fictional characters. They may be real people off-screen, but what has attracted me to them isn't their actual selves. Instead, it's the characters I've seen them play. I don't know Richard Dean Anderson, after all. I know (and love!) MacGyver. And, in most cases, I actually prefer "dating" the made-up people, to tell ya the truth. There have been things I've learned about some Boyfriends that I've wished I'd never heard. Some actors have been so tarnished by anecdotes about their real selves that I haven't been able to make them Boyfriends at all -- no matter how much I might think I love them (for example, I LONG to make Tom Selleck a Boyfriend, as I'm a huge fan of the "Magnum, PI" reruns on A&E - but a quick web search on him revealed some ugly truths about his politics (and you thought Charlton Heston was bad!) and ever since, I've had a hard time separating Tom from Magnum long enough to fan the dying flame back into full intensity).

And so, in some ways, Boyfriends like Samwise Gamgee are the best ones a gal can have. I know everything there is to know about him -- no surprises in store for me! And what I know about Sam is, thankfully, ALL good. VERY good. Amazing, no less.

Samwise is short, hairy (red-hairy, no less), and not-too-bright. But he's also the loyalest, cutest, sweetest, bestest friend a person could ever be lucky enough to have. Don't believe me? Well, hey, don't take MY word for it -- just ask Frodo!

Or, even better (and certainly far easier, that's for sure), just slap down your $8 and go see the movie, for pete's sake. Even non-Tolkien fans will find plenty to keep them entertained (like three ex-Boyfriends: Sean Astin, Viggo Mortensen, and Elijah Wood (and please note, I'll be updating all three of those write-ups with biographical stuff soon)). And when you've had your fill of drool, turn your attention to the settings, which truly fulfilled everything in MY imagination, or the plot, a classic tale of the seduction of evil and the overwhelming always-triumphant power of good.

And then, after all that, turn your attention to Samwise Gamgee. You'll notice in the film that Sam is somewhat of a background character. He's a tag-along, for the most part, in "Fellowship." But even by the end of that first installment, Sam's true character has already begun to shine. It's a light of warmth, trust, and love the likes of which you will be hard-pressed to find anywhere else. That scene, the scene at the end where Sam catches up with Frodo, both of them crying as Sam manages to squeak out the words, "Gandalf said, 'Don't you leave him, Samwise Gamgee!'" -- that is one of my all-time favorite movie scenes. And, true, like many of the scenes in the film, it's been edited and reworded by the director to make it shorter and more poignant. In the book, Samwise sputters a longer series of more desperate words -- Sam isn't profound. Ever. But his stumbles over vocabulary are hardly the point. For the thing that makes me respect Sam isn't his words -- it's the way he ran through those woods to catch that boat and rejoin his friend, despite the paralyzing fear he felt in regards to what he knew lay before them both.

Dude, that is just so cool.

And it's nuthin' compared to what Sam will eventually do for Frodo. This might be a bit of a spoiler, but I'm sure most of you have already read the books, and, if not, you'll surely forget this by the time the third movie comes out. Sam does another thing for Frodo near the very end of the trilogy -- and, actually, it was this scene that made me truly fall for him. By that point in the story, the Ring has made Frodo so sick that he can barely walk. And yet they must go forward -- they have one last mountain that they must climb, or else the whole of Middle Earth is doomed. Frodo, exhausted, can bear it no longer. He collapses. Every man, every hobbit, has his limit -- there's just so far each one of us can go, no matter what may be at stake. But, seeing his friend's anguish is all that it takes for Sam to muster up the strength to carry on. Instead of falling easily on the ground next to Frodo (and lord knows, by this point Sam would give just about anything for a nap and some beer), he instead picks his weary friend up, tosses him over a shoulder, and by god, he keeps on truckin' -- bearing not only the weight of his own body, but the weight of his friend's and of his friend's almost impossibly heavy burden (the Ring, metaphorically). And while I won't tell you how things end up for either of them, or for Middle Earth, I will tell you this -- pass or fail at this point, Samwise Gamgee still goes down in my history books as the bravest Boyfriend I have ever had the honor to love.

And so, with this in mind, I want to make an official declaration to you guys. And to all the members of my family who might read this. I hereby to officially declare that the name of my first-born son will be Samwise. Even though, technically, "Samwise" means "half-wise." We all know better than to translate things literally, though, don't we? Cuz we know what "Samwise" truly stands for.

So, if you are a member of my family who is planning to have kids of your own and you beat me to it, don't name your kid Sam unless you are willing to have him share a name with his cuz. Personally, that's totally cool with me (wouldn't it have been totally fun to have the same name as your cousin?). But don't go gettin' mad at me later and try telling me I didn't warn you.

And, as for you non-family people, go see the movie and then read or re-read the trilogy (and for my reviews of the books, click here). It's time you get to know Samwise Gamgee the way I do. And you might as well meet the rest of the fellas as well. Especially since a few of them are going to be showing up on this web site soon as well (that guy who played Legolas sure is cute!). There's a Boyfriend in there for all of us, no matter what your type. Just keep in mind, I got dibs on Samwise. He may not be the smartest or the most handsome, but he's definitely DEFINITELY the best of the bunch.

(there are a million sites out there -- hit a search engine like google.com and go crazy!)