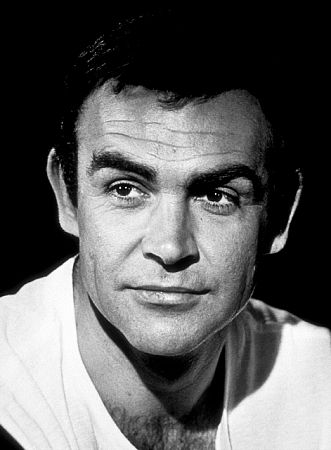 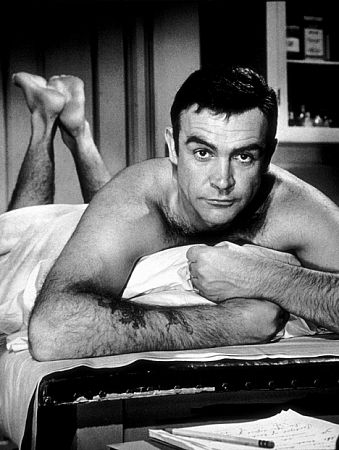 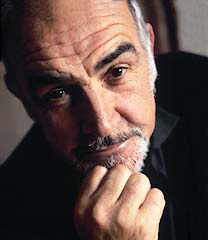 This week's write-up is the final installment in a four-week "oldies but goodies" marathon. Though, as you know, I had a little problem last week and couldn't wrap up the series right away (a little problem named "COLIN FIRTH"). Anyway, let's think back. Get back on track. We started with Patrick Stewart, moved on to Pierce Brosnan, and then hit Richard Gere. And now, it's finally time for dessert. So, this week, allow me to introduce the last but not least -- everybody's favorite, I'm sure -- Sir Sean Connery. (Wait, he has been knighted, right? If not, my apologies to the Queen.)

The bonus of featuring Sean Connery as a Boyfriend is that it sure makes for an easy write-up. In fact, I'm sure you've noticed by now that the Boyfriend write-ups follow a structural format. First you have the introduction (see paragraph one), then you have the explanation (now), then you have the biography (to follow), and finally the assignment of a score, with discussion. The intro is done (Welcome! Here's Sean!) and the biography and points sections are both a snap to do. It's really the explanation/justification section that takes a lot of time and energy. But for someone like Sean Connery, that can be taken care of with minimal effort. All you really need are two links. This one (an image) and this one (a .wav file). The first is a picture of a young Sean Connery in a swimsuit. The second, a recording of (gasp!) his voice.

You see what I mean? What more do you need? That face, that voice. That's it. And if that doesn't convince you, nothing will! So, we can skip the usual "but, but, he's cute! and, and, he's smart!" part and jump feet-first right into the bio, thus leaving you guys with a few extra minutes at the end for quiet time. Quiet time I heartily recommend you use day-dreaming about, say, a nice evening walk on the beaches of Hawaii with Sean Connery in one hand, and an umbrella cocktail in the other. Ah, yes. You see what I mean?

Thomas Sean Connery was born on August 25, 1930 in Edinburgh, Scotland. His dad was a truck driver and the family was blue-collar and poor. As a result, Sean was forced to start working at a very young age. In fact, by the time he was 13, he had to drop-out of school to help support the family full-time. Eventually, he joined the Royal Navy, but, much to his dismay, had to be released due to ulcers (though not before scoring two cool tattoos: "Scotland Forever" on one arm and "Mum and Dad" on the other).

Sean was always active and sporty and, after leaving the Navy, he began to become serious about bodybuilding. (Hubba hubba!) In 1953, he was actually Scotland's representative in the Mr. Universe contest, where he place third in the tall man's division. However, Sean decided not to make a career out of bodybuilding (and they didn't have WWF back then). In fact, he didn't really seem to know what he wanted to do, and over the next few years, he spent most of his time going from job to job, working as a hard laborer, a chorus boy, a lifeguard, and even as an art class nude model (I knew I should've gone into art).

The good news is that, eventually, Sean drifted into acting. Leaving school did nothing to temper his hunger for learning and he spent much of his free time in libraries, where he got hooked on plays. Soon he was getting roles in stage productions, where he received fairly decent reviews. His first television appearance was in 1956 and he quickly was signed with MGM on a movie contract that would take him through the rest of the decade.

It wasn't until his role in Disney's "Darby O'Gill and the Little People," however, that people really noticed him on-screen. By the time he hit "The Longest Day," where he starred alongside people like Richard Burton, Red Buttons, and Richard Beymer, Sean Connery's career had really picked up steam. That same year (1962), Sean Connery also starred in "Dr. No," the first of the Bond series which would eventually make him an international star.

The funny thing about that role, though, is that Ian Fleming was really hoping for someone more like Cary Grant, Rex Harrison, or Trevor Howard. When presented with Sean Connery, the man who MADE James Bond, he said, "He is not exactly what I envisioned." Ian reluctantly agreed, however, and "Dr. No" was a huge success, leading to three more Bond films over the next five years.

After all that, however, Sean began to get slightly annoyed by the fact people seemed only to know him as James Bond (think Colin Firth has problems with the Darcy thing?? Wait until you meet James Bond!). So, he decided to leave Bond behind and went off to star in a series of movies like "Marnie" (Alfred Hitchcock) and "The Molly Maguires." Though he was glad to have left his Bond-itude behind, he did pop back up to make "You Only Live Twice." He then swore off Bond for good and was replaced by George Lazenby.

Yeah, George Lazenby. What, you never saw "On Her Majesty's Secret Service?" Heh, me neither. Know why? Because it stinks! In fact, it was such a miserable flop, that the movie company pleaded with Connery to return for just ONE MORE Bond movie after that one ("Diamonds are Forever") so they could have a second go at replacing him, hoping Roger Moore might fare better.

He did, they did, and he did. And that's it for Sean Connery and James Bond. Oops, ha ha ha, I lied. Sean Bond came back once again in 1983 for "Never Say Never Again." And now you finally know why that title is so ironic, right?

Now, if you're anything like me, you actually think Sean Connery hit his peak (both in acting and in gorgeousness) around the mid-80's. That's when he made movies like "Highlander," "The Presidio," "The Untouchables," and "The Name of the Rose." Things only got better in the 90's, though, with "The Hunt for the Red October" (holy cow, Sean Connery as a Russian -- meOW!), "The Rock," and "The Russia House." Now, pay attention to this part before you start emailing me -- I am NOT trying to tell you that every movie Sean Connery has been in (including some of the ones I've mentioned), is an absolutely perfect flick that I've seen a million times because it's so good. No, sir. Sean Connery has made some real dogs ("Medicine Man" leaps right to mind). However, the difference between Sean Connery and some other actors who make lots of bad movies is that even when Sean is in a bad movie, his very presence makes it wholly watchable. In fact, I've probably seen "Medicine Man" three or four times, even though every time I see it, I have to fight the urge to punch Lorraine Bracco's lights out (which would hurt, since I am usually watching it on TV). Sean Connery is a man who makes a lot of bad movies. And I've seen every single one of them, most of them more than once, and never regretted it.

Oops, there I go. As if you guys really need to hear any kind of justification from me. If it's not obvious to you why I turn on "Medicine Man" everytime it comes on WTBS, then there's nothing I can say to convince you. You either love Sean Connery or you don't, and if you don't, well, then what the heck are you doing reading down this far?

The bad news, folks, is that according to the IMDB, Sean's most recent project was "Finding Forrester," which has already come and gone in theaters. I haven't seen it, though it seemed to get good reviews. I'm saving for a wedding, so I'm much more into renting movies (and/or just waiting for them to come on television) these days. But it's depressing to discover that he's not working on anything else yet. What is he thinking? I'm totally hip to a sequel to "Entrapment," for example. Never understood those weird people who kept saying it was completely unbelieveable that someone like Catherine Zeta-Jones would fall for a fogie like Sean Connery. I'm just like Catherine Zeta-Jones myself (well, okay, not JUST like her) and here I am, drooling over the old man in public. For all the world to see. There's just something about Sean Connery.