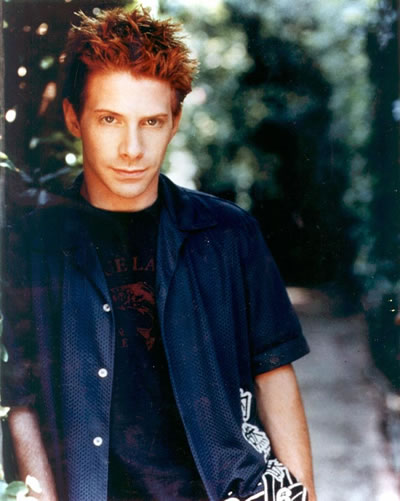 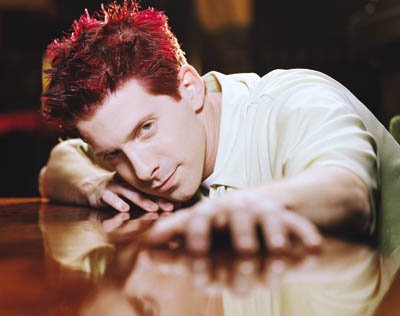 As so often happens, I had a totally different Boyfriend planned for today, until, at the very last possible minute, fate intervened and gave me a big shove in another direction. Not that you should be surprised, considering the fact that I've already featured three guys from "Buffy the Vampire Slayer." If you didn't realize there was a trend being set, it's your own darn fault. Because yep, that's right, this week's Boyfriend is Seth Green, also known as "Oz" on the show.

Now, if you thought Angel was the brooding quiet type, allow me to introduce you to the Ozster. If you sneeze during an episode, you may very well miss Oz's only line that day. And yet he remains one of the characters that really stands out in my mind. Why? Because when he does open his mouth, it's to say something from one of two categories: either something extraordinarily witty about a given situation or something extraordinarily sweet about his girlfriend Willow.

Oz is the ultimate romantic -- thoughtful, caring, dedicated almost to the point of obsession (but, happily, not in a creepy way). He's also a musician who writes songs about his sweetie (he plays in a band called "Dingo Ate My Baby," which is just SO Oz, if you know what I mean). And, in addition to being sweet, talented, smart, and in love with Willow (because, honestly, who isn't?), he's also got GREAT hair. In fact, he has hair a lot like mine, except mine doesn't change color quite so often.

And yes, Oz has some flaws. Sure, he's a little distant at times. He has a tendency to keep things inside and brush off Willow's pleas to be let in (though, on the plus side, more than once he's changed the subject by grabbing her and kissing her, which is okay by me). He's also a little hard to figure out. He can be quite cynical and, upon occasion, rather tactless. Oh, and did I mention he's also a werewolf? Of the tears-people-into-shreds variety? But honestly, people, who among us doesn't have that inner werewolf, itchin' to be let loose upon the world? That evil beast that's unleashed from time to time completely against our will? I, in fact, would like to blame my own inner werewolf for anything disparaging I have ever said about Bam Margera, who emailed me yesterday to say that while he was glad to see he'd been made a Boyfriend, he thought I had greatly underestimated both him and his sport. And, after reading his message (well-written, funny, and containing only ONE grammatical error), I have to say it seems as though he's right. So, Bam, dude, inner werewolf, 'kay? Rightie-o.

Alas, I digress. Where was I? Oh yes: I love Oz. He may not have the biggest role on the show, but he's made me swoon upon more than one occasion, and that's pretty darn good for a guy who's only got about three lines an episode, max.

A little biography on Seth Green: he was born Seth Ghessel Green on February 8, 1974. He has one sibling, a sister, and was raised in Philadelphia (great city!) by his parents Herb (math teacher) and Barbara (artist). He attended public school and was an avid soccer player as a kid. At age six, he appeared in a summer camp production of "Hello, Dolly!" and has loved acting ever since.

His first movie, made in 1984, was "Hotel New Hampshire" with Jodie Foster (her production company, Egg Pictures, is named after his character in that movie, FYI). After that, Seth made about 2-3 movies a year, including "Pump Up the Volume," "It," "My Stepmother Is an Alien," "Notes from the Underground," "Can't Hardly Wait," and both "Austin Powers" movies. I've also seen him in "Idle Hands," "America's Sweethearts," and "Rat Race," though the latter I saw only without sound while on an Amtrak to Salem, Oregon a few months ago. Incidentally, a little piece of trivia, Seth actually had a role in the original "Buffy" movie, but it ended up on the cutting room floor. Foreshadowing? Yes.

Of course, we all know him better for his work on television. Because not only did he have a lengthy role on "Buffy," but he's also shown up in several of my favorite series over the years. He was in episodes of "Spenser: For Hire," (by the way, ex-Boyfriend Robert Urich, we'll miss you), "Life Goes On," "The Wonder Years," "Beverly Hills 90210," and "Mad About You" (the early days).

And then, of course, there's his newest foray into the small screen, "Greg the Bunny." I have to admit, when I started seeing the ads for this show, I was extremely skeptical. Against my better judgment, though, I did catch an episode recently and I have to admit, despite my macho desire to avoid finding bodily function humor funny, a few chuckles did sneak out. It's starting to look like one of those shows I'm going to have to watch on the sly to keep my reputation for having good taste intact. Then again, I felt that way about "Survivor" when it first started, and now I'm as vocal an addict as the next glued-to-the-TV-on-Thursday-night fan. We'll just have to give it some time and see what happens. If you see Eugene Levy show up on this site as a Boyfriend, you'll know it's time for an intervention. Quick.

Also up this year for Seth is the third Austin Powers movie, "Goldmember." But that's about it for now (not that a series and a movie isn't enough to do, but you know what I mean). Oh and, additionally, Seth also keeps fairly busy, I assume, by the production company he and his two pals Breckin Meyer and Ryan Phillippe own, "Lucid Films."

Of course, these days Oz is currently showing up nightly in my living room, in the episodes of Buffy that are running on FX from 6-8pm, Monday through Friday. I have the feeling we're hitting the season in which he vanishes for good soon, though, so tune in now if you want to catch him, or give it a few months and try again. Incidentally, I've also seen enough of the current season to know that when Oz left Willow, she was so devastated she gave up on men for good and became a lesbian. Can't says I blame her. And besides, that works out well for me, because I have a huge crush on her as well.

So, try to catch some of the Oz episodes if you're a new Buffy fan. You won't regret it. And if you're not a Buffy fan, I highly recommend "Hotel New Hampshire," which is a great movie about a family that goes through a series of disasters and still somehow manages to emerge intact on the other side of life. Crazy characters abound, Seth's "Egg" being the finest of them all. Can't go wrong, I assure you.