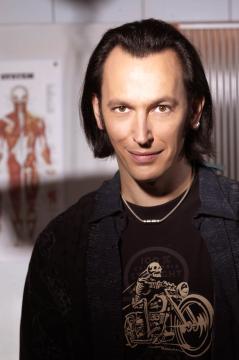 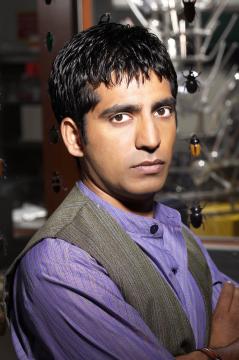 Okay, this week marks the first in a series I currently anticipate will last for three weeks. So, if you hate part one, you might as well swear off the site until January (though, note, I may not do all three back-to-back, just to keep you guessing). I feature these guys for a variety of reasons, including the usual ones (cute, smart, sexy), but primarily for a purely selfish purpose. I am hereby attempting to coerce you into watching a television show that I love, but which I fear is going to be canceled soon despite my affections. And I figured a good way to get your attention would be to have a MENAGE A TROIS this week.

The show, by the way, is "Crossing Jordan" and it runs Monday nights at 10pm. The reason I fear its cancellation is twofold. First there's the obvious -- it's currently on opposite the new hit series "CSI: Miami" (which both I and ex-Boyfriend William Petersen both think kinda stinks). For some reason, everybody LOVES CSI:Miami, even though it's (and why mince words here?) boring as hell. And nobody's watching Jordan anymore, even though that show is packed with tons of cute guys (including ex-Boyfriend Jerry O'Connell, who just looks better and better every time I see him), loaded with cool science, and rarin' with great plots. Plots that touch not only on forensics, but on people. And it's the people element that I think CSI:Miami is completely lacking. I think that's what really bothers me about it. The original CSI is probably my favorite show on television right now -- but CSI:Miami doesn't have the spark the original has. I don't care about the investigators and they don't seem to care about, well, anything. None of them has any passion. Not for their work, not for the science, not for each other, not for nuthin'. It's CSI:Yawn City, not CSI:Miami.

But this is no time or place for a detailed criticism of CSI:Miami's shortcomings, except in the ways that said shortcomings relate to Crossing Jordan. Jordan is full of interesting, three-dimensional, funny characters like, say, the two goofballs I made Boyfriends this week, Nigel and Bug (played by Steve Valentine and Ravi Kapoor, respectively). Nigel and Bug are extremely passionate about their work -- when they find something out using a cool science trick, they get as giddy as I do when my VBA program finally does what I want it to. As giddy as most passionate people get when something they think is totally nifty actually works. It's a giddiness only nerds can truly appreciate, I think. And, as the most popular nerd on my block, I can tell you that when you see it happen to a fellow geek before you, there is no happier sight to behold.

Incidentally, this giddiness has been witnessed numerous times on the original CSI -- Gil Grissom is the king of nerdy giddiness. You know that gleam he gets in his eye when he whips out that cool chemical stuff and the blood just reveals itself even though the bad guy painted over it with three layers of acrylic paint? That's one form of Nerd Gidditude. But I have yet to see Horatio Caine (ptew!) demonstrate even the most restrained type of NG about anything. And his partners are all blah and sigh too. So, why aren't you watching Crossing Jordan?

Now, be honest, Is it because you watched a few episodes its first season and thought it was cheesy and dull? It kinda was, I'll admit. But it's gotten a LOT better. And this improvement is in no small way because of Steve and Ravi, who are the behind-the-scenes scientists who usually crack the important clues for Jordan, and always have a good time while doing it.

Nigel (Steve) is a complete wacko goof, full of dirty jokes, big grins, and a true appreciation for all things kitsch. Bug (Ravi), on the other hand, is more laid back. Quiet, smart, and a total sweetheart (did you see this week's episode? I can't wait for Lily to wake up and realize what she's missing!). And plus, Bug is just as cute as a, well, as a BUG! Jordan schmordan, I say. She's the least important character on that show. So if what's holding you back is the fact you can't stand Jill Hennessey, just do what I do -- ignore her! Really, the rest of the cast gets almost as much screen time, it'll be easy for you to fall as hard for them as I have.

Plus, as if that news wasn't enough to get you to watch, this season they finally made Jerry O'Connell's terrific character, Woody, a regular cast member (well, for the most part -- he still shows up in the "guest star" list, but he's been in nearly every episode so far). I love Woody. He's irresistible. In fact, so irresistible that I'm speechless. Go read his write-up if you want to learn more.

Now, you may actually recognize both Steve and Ravi from other TV work. Steve, in particular, has been showing up a lot lately in M&Ms commercials, including my personal favorite: a guy checks into a hotel and is told by desk clerk Steve that the hotel offers free turn-down service, including a complimentary chocolate on your pillow (though, of course, Steve is a Brit, so he actually says it more like this, "Cohmplimentahry choc-late on your pil-low"). Cut to a shot of the man in bed, with one of the little M&M guys on the pillow next to him. The M&M guy sighs with heavy boredom and says, "Can I watch TV?" Bah ha ha hahhaahhaah! I'm sorry. I know it's stupid. But it cracks me up. No, like, EVERY TIME I SEE IT. (Note: it really doesn't take much to get me to laugh. It's why I make such a great date for dinner parties.)

As for Ravi, you might have seen him in that old TV flop "Gideon's Crossing," where he played a young medical resident. I never watched the show myself, so for me Ravi is brand spankin' new material. A novelty. A shiny new penny. But, honestly, had I known GC had cuties like Bug on it, I might've written about Ravi sooner -- you know, in an attempt to keep THAT show from ending up under TV hospice care, where doomed shows go to die relatively peaceful, "slip-away" kinds of deaths.

TV hospice care usually begins the way Crossing Jordan has been headed lately. A few episodes air, and then we get a few weeks with nothing, not even a rerun. Thus virtually ensuring that the few people who still were watching it get so tired of waiting for it to return they finally give up and let themselves get hooked on CSI:Miami. I have never understood why networks consistently do this, and yet also consistently seemed totally surprised when a formerly popular show suddenly takes a dive down the tubes. GREAT MOVE there, NBC! What's it going to take to teach those dumb television executives this lesson? Zeesh!

Anyway, after a season where they do that every now and then, you usually end up with a summer where they never show any reruns either (think last summer and "Providence"). And then the next thing you know, the network is shocked to discover that their show is barely being watched by anyone anymore, so they yank the contract and kill the show off mid-season (think December and "Providence," and then get me a hanky, cuz I'm starting to tear up).

It's really quite depressing. And I swear to you now, if Crossing Jordan dies this same slow tortured death, I will only have YOU to blame. And yes, I do hold a grudge, my friends. I hold fast. I hold tight. I hold FOREVER.

Okay, now that we've gotten the threats out of the way, let's move on to the educational portion of this segment. Here's a little biography on Steve and Ravi, our two intrepid scientific heroes. To begin with, let's just get this out of the way -- neither one of them actually knows thing one about science. Never worked in a scientific field. Never majored in Biology. Never aspired to medical school.

But for this I forgive them. They can leave all the science stuff to me when we get together. After all, I almost majored in Biochemistry, before I wussed out during a quarter of P-Chem and switched to English instead. This must score me a few points on the science geek scale. Also, I subscribe to "Discover" magazine. And the articles about space usually make me exclaim "COOL!" really loudly, even if I'm in public. I can't help it. No amount of embarrassment can deter me from thinking that it's REALLY COOL that space is curved and expanding and infinite.

Where was I? Oh yes. Steve hails from London, England, but that's about all I could find out about his formative years. He's been in television for a decade and has had guest starring roles in numerous comedy series like "Just Shoot Me," "Will and Grace," and "Dharma and Greg." He's also played the comic relief in such dramas as "Providence" and "Diagnosis Murder," two shows that also got sent to TV hospice far too soon. Hmm, let's hope this isn't some kind of sign.

Steve has had a few small roles in a few feature films, most notably "The Muse" with ex-Boyfriends Albert Brooks and Jeff Bridges, and "Mars Attacks." His performances on stage in London have ranged from Shakespeare to stand-up comedy acts. But now he's finally hit a role with some serious staying power -- and maybe it will be the role that finally makes him a real commodity in the world of TV and silliness. It's a world I'm quite fond of, personally. So, go Stevie go!

As for trivia, Steve currently lives in LA with his wife and their "two weird cats." In his spare time, he likes to ride horses, dance, and take roller coasters out for a screamin' good time.

Ravi Kapoor was also born in England, in Liverpool. But he spent a number of years training to be an actor in the East 15 Drama School in London before he took to the stage. He followed that professional training up with an admirable theater career in England that lasted for ten years before he packed his family and stuff up and moved to LA to try for something bigger.

He too has been in a number of television shows, including a critically acclaimed 10-part miniseries called "Land of Plenty" which recently aired on BBC America. He has also written and directed his own play, called "Oh Sweet Sita," which had lengthy runs in both London and Toronto.

After he moved to the U.S., Ravi worked with a touring children's theater company. He then moved on to television, where he scored his first major part in "Gideon's Crossing." And while he says his mother is proud he's playing a doctor who specializes in bugs, he himself admits to a lack of hobbies. Well, I guess that's true, Ravi, as long as you don't count, say, film, drama, literature, music, and the visual arts as "hobbies." Ahem.

Anyway, these two guys are up-and-comers, mark my words. But this prediction will only come true with your help. So, go ahead, make my day! Stop watching CSI:Miami and start tuning into Crossing Jordan (or at least tape CSI:Miami and watch it later -- just don't tell anyone you're doing it). Here's your chance to finally thank me for all the hard work I do for you. Save my show! I beg you!