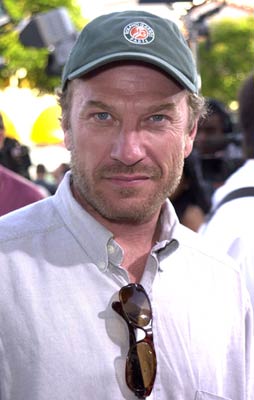 Sometimes, when an actor plays a creepy serial killer in a movie, it kind of stigmatizes them forever. Especially if they were really, really effective at the whole "creepy" part. Cases in point: Anthony Perkins from "Psycho," whose career never really recovered from the whole "Norman Bates keeps his mother's rotting corpse in the kitchen" business. And then there's also Christian Bale, who will never ever ever never EVER be a Boyfriend because he so seriously freaked me the heck out in "American Psycho." So, please, stop asking, cuz it ain't gonna happen no matter how much you beg, plead, and beseech me to watch "Little Women." (By the way, while we're at it, I'd also like to state for the record that no pleas for Orlando Bloom will be effective until after "Pirates of the Caribbean" comes out on video. Give me a chance to see that and I think I'll probably be a lot more open to the idea. Until then, adding your vote to the pile won't do anything to bump him up closer to the top of the list. Just thought I'd let you all know this, so you don't have to spend any more of your time crafting clever emails in an attempt to woo me into featuring him. Hang in there, I'll get around to it eventually, I'm sure!)

Now, where was I? Oh yes, actors extremely effective at playing psychos often are no longer effective at playing anything else. We become so thoroughly freaked out by their ability to feign sociopathology that we can never shake those heebie jeebies no matter how many sweet, cute underdogs they later portray. Oddly, other actors can play characters that heebie-jeeb us out and then immediately go on to something else, shaking those creepy, twisted, psycho twisted grins right off their faces and instantly transmogrifying back into their loveable old selves. Anthony Hopkins, for example, was a pretty unsettling nutcase in "Silence of the Lambs" and "Red Dragon" (note: I thought "Hannibal" was totally stupid, both the book and the movie, but have forgiven Anthony for his poor judgment since seeing "Red Dragon," which was very fun and also stars ex-Boyfriend Edward Norton. But I still think of him as charming and highly smooch-worthy. I can't account for this or even begin to hypothesize about what makes the difference here. But, happily, I CAN report that, for me anyway, the same thing goes for this week's Boyfriend, Ted Levine.

Ted Levine played a serial killer, you ask? Yeah, and I even just gave you a hint. If you can't place him by looking at his picture up there, I totally understand that. I never would've connected him to the serial killer role he'd played just by looking at him either. He looks quite different nowadays. But the moment I heard him speak last year in the premiere episode of "Monk," where he plays Captain Stottlemeyer, I knew exactly where I'd heard that voice before. He was the serial killer dubbed "Buffalo Bill" in the movie "Silence of the Lambs." The one Hannibal helps Clarice catch. The one who kidnaps the size-14 women so he can strip them of their skin and sew himself a "woman suit" out of their flesh.

So, at first, I was understandably concerned that every time I saw him on "Monk," the lines "It puts the lotion on its skin or else it gets the hose again" would run through my head, along with an image of him posing in front of the mirror with the woman suit on, his private bits tucked between his legs. shudder

However, as it turns out, aside from the initial, "Oh hey! That's Buffalo Bill!" Ted hasn't actually creeped me out at all. In fact, quite the opposite. He's managed to charm all the unsettling memories right out of my system. I even watched "Silence of the Lambs" last night to refresh my brain on what Ted was like in that film and I still came away dreaming of a lovely candlelit dinner date. And it's just so bizarre -- he was very convincing in "Silence." So, why does Christian Bale get inexorably linked in my brain with his murderous character, and Ted Levine does not?

"Monk" starts its second season in June, and I've been greatly looking forward to it ever since last season's finale. If you'll remember, when I featured Tony Shalhoub as a Boyfriend last year, it was because of his role as the title character on "Monk," and I spent a good portion of his write-up telling you exactly why that was one of the best shows on television. For a refresher course, give that page another look after you finish here. And if you aren't already hooked on "Monk," I'd seriously urge you to start tuning in when the second season starts - it's just an absolutely terrific show. Totally flawless in every way.

"Totally flawless" does not, however, aptly describe the other thing I recently saw Ted Levine in. But it wasn't Ted's fault or anything. I blame the doofuses who wrote the nauseatingly bad script instead. The movie was "The Truth About Charlie," a remake of the great old Cary Grant film "Charade." Ted plays one of the three bad guys, tracking Mrs. Lambert and her husband's missing fortune. But the changes they made to the plot, in an attempt to update it a bit, just totally destroyed all the great parts of the original. All the clever twists, and definitely all the clever dialogue, was completely stripped out and replaced with inane and often annoying elements instead. Now, maybe it's just because "Charade" is one of my all-time favorite movies. Maybe it's just because Mark Wahlberg, while sexy, is nooooo Cary Grant. Maybe it's because Tim Robbins had clearly seen the original too many times and kept trying to make himself sound just like Walter Matthau and failing miserably at it. Or, maybe it was the ridiculous old singing guy who kept popping up out of nowhere to serenade the happy couple. I dunno. All I know is YUCK. How they managed to take a clever, suspenseful, and thoroughly charming film and turn it into such crap is seriously beyond me.

But regardless of that, it was still great to see Ted. And reassuring to find him in a major Hollywood film, despite his recent jump from big screen to television. "Silence" and "Charlie" are by no means Ted's only movies, though. He's been in a lot of things, including "Joy Ride" (as the voice of the psycho truck driver), "Ellen Foster" (a TV movie based on a book I really enjoyed), "Switchback" (a so-so thriller starring ex-Boyfriend Dennis Quaid), "Heat," "Georgia," "The Mangler" (a baaaaaaad horror movie), "Ironweed" with Meryl Streep, and a pretty decent little thriller called "Betrayed" with Debra Winger and Tom Berenger. Plus a number of other films I haven't seen, but will look for next time I have some free time and feel like a little Levine Film Fest.

Which will probably be very, very soon, actually. Like, the weekend after Season Two of "Monk" starts, when I'm instantly reminded of why I love Teddy so darn much. He's by no means the most classically handsome fella' ever featured on this web site. In fact, not even close. But there's something about his eyes and his smile that I find extremely charming. And then there's his voice, which I totally absolutely completely love to listen to. And his talent, which is incredible. That he can go from serial killer to sweetheart without a single hitch is pretty amazing, really. Now that I think about it, I think the reason Ted Levine and Anthony Hopkins managed to escape the same fate of Christian Bale in my mind is that Ted and Anthony have a much stronger presence of compassion and intelligence (to me, anyway - and no offense to Christian who I'm sure is also compassionate and intelligent in real life). They are all three wonderfully talented actors and pulled off their sociopathic character transformations brilliantly. But no matter how much they try, Anthony and Ted's faces, voices, and manners just scream "nice" to me, in a way Christian's do not (maybe it's because Christian's got those fang-like teeth? Or because he was just so uncannily effective at making me pee my pants?). Maybe that's what made them so effective at being scary when they played killers, actually. And what made it so easy for me to switch back to loving them once they were finished with those parts. Not sure. But there you have it, anyway. For what it's worth.

A quick biography on Teddy -- and I mean really quick. There aren't any actual fan sites about Ted Levine out there, much to my great surprise, and as a result, there's not much information to be found on him either (so, hey, if you're toying with the idea of putting up the eight-hundred-and-eighty-gazillionth fan site about Orlando Bloom up on the web, how's about doing something a little more original and putting up a site about Ted Levine instead?). He was born on May 29th, 1958 in Parma, a suburb of Cleveland, OH. He began his acting career in theater, where he was one of the most respected names in Chicago's Steppenwolf Theater. After he received an MFA in acting from the University of Chicago he began making frequent appearances in a number of television productions and small films. His cinematic debut was in "Ironweed," but he's probably best-known for his role in "Silence of the Lambs."

Though his performance in "Silence" was highly acclaimed, however, movie offers didn't immediately start flooding in for Ted, so he returned to television work for several years, until he took the part of the cop on the trail of a carnivorous laundry machine in "The Mangler" in 1995. Understandably, that role didn't do much for his career, despite its dazzling originality (ever seen another movie about a laundry machine that eats people? Yeah, me neither!). When he showed up in "Heat" with Robert De Niro, however, he started to earn more prominent roles again. Dedicated fans probably remember his starring role in "Wonderland," a television series about a mental health hospital - though the show was raved about by critics, it did dismally in the ratings and was cancelled after only two episodes had aired. That part may have led to his role in "Monk," which came out two years later. And thankfully, "Monk" has put Ted Levine back on the map.

Up next for Teddy is another season of "Monk," of course, as well as two new feature films. The first is "Wonderland," no relation to his old TV series, a film about John Holmes (played by Val Kilmer), a porno movie star. Second will come "Birth," starring Nicole Kidman, about a mother who becomes convinced that a ten-year-old boy is the reincarnation of her dead son. Sounds depressing. In fact, neither one of those movies sound like my kind of thing. But, happily, "Monk" is thriving and I expect it to be around for a long, long time. Make sure to do your part to ensure that, by tuning in this June for the season premiere! If "Monk" gets cancelled due to low ratings, I am holding YOU personally responsible!