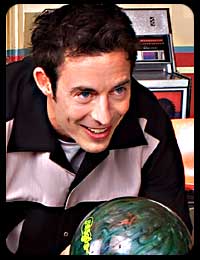 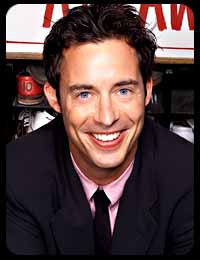 I write this week's Boyfriend of the Week with an ulterior motive -- I like his show and I want to make sure it isn't canceled. How best to do that? Prove to you that Thomas Cavanagh is cute, funny, and irresistibly charming.

In case you haven't been paying attention, the guy in those photos above is the star of the new television show "Ed" (8pm Sundays on NBC). If you haven't been watching it, you seriously need to tune in next week and give it a shot. Why? Cuz Thomas Cavanagh is cute, funny, and irresistibly charming (duh!). "Ed" is about, uh, a guy named Ed. Funny that. This guy named Ed is a lawyer, recently fired from his law firm for accidentally omitting a comma in a brief that ended up costing the firm a bazillion bucks. Whoops, he said. See ya, they replied.

Rather than moping around in his big city life, Ed decides to pack it all up and move home to Stuckeyville. A small town. With a really nice bowling alley. That is for sale.

So, what does our hero do? He buys the bowling alley, of course. Why? To impress the girl he used to be madly in crush with way back in his high school days and who, to his pleasant surprise, is still around and still gorgeous and still totally sweet. Unfortunately, she's also dumb as a post. How do I know this? Because she doesn't fall madly in love with Ed at first sight. Fool! Such a fool! Foolish women like that simply do not deserve the Eds of this world.

Though there have only been three or so episodes thus far, it looks like the plot will revolve around this romance (she's dating a jerk -- I'm sure she'll be dumping him soon), and around the bowling alley, which is also Ed's new law office (though he resists the phrase "bowling alley lawyer," it is pretty apt). But this is no lame romantic comedy kind of thing. Well, okay, yes it is. But the difference between it and, for example, a Meg Ryan movie, is that this one stars TC. And TC is, as my mother would say, "a keeper."

Many of you may actually recognize Thomas Cavanagh from last year's season of "Providence." Remember the guy who thought he was a dog? Were you not totally smitten with him ("Doug") or what? I mean, really, wouldn't it be great if ALL men acted like sweet doggies? Loyal, playful, always happy to help, easy entertained, and happy with just about any kind of food you put in front of them. Wouldn't that just make life ten times better?

Then again, dogs are stinky and they lick your face a lot. I have some problems with that.

But I digress. That is not the upshot of this essay. The upshot is: Thomas Cavanagh is great. Not only is he funny (and boy, he is really really funny, folks -- his voice alone exudes funniness, and so do his gangly limbs) but he's also adorable. Just LOOK at that smile, people. Dimples! He's got dimples! I love dimples. And if you'd seen last week's episode, you'd be as crush-sick as I am by now. That cheesy romantic video he made for Carol (the fool) just made me howl with laughter. The kind of laughter that comes from watching someone make an absolutely marvelous fool out of themselves for love. You just don't get "charming" like that anymore. Ed is charming. "Ed" is charming. So start watching before they start thinking about canceling it! I promise if you watch a few episodes you'll at least have to admit he's cute. And you might even admit it's a pretty funny show. Literature, it is not. Good clean fun, 'tis.

A quick biography of TC: Tom spent the vast majority of his childhood years living in Ghana (that's in Africa, folks) with his parents, who were teachers. When it was time for Tommy to enter high school, the family moved back to their native country, and I'll give you THREE guesses what that was. Right! Canada! Anybody noticing a trend here?

Anyway, TC did well in school, eventually moving on to Queens University in Ontario, where he earned three degrees (English, Biology, and Education) (is that sexy or what?). He grew interested in theater when he was cast as Danny Zuko in a Canadian production of "Grease" and moved on from there to a few other small plays, finally hitting it big with a costarring role (alongside John Cullum) in the Broadway revival of the hit musical "Shenandoah." Shenandoah was a big hit on Broadway, and so, therefore, was Tom. And for that reason alone, I forgive New York for the Yankees.

After spending a year in The Big Apple singin' like mad on the stage, TC returned to Canada, where he spent a few years on some local television shows (none of which were familiar to me). Eventually, he moved to Los Angeles, where he immediately landed a role in the pilot of a television show that never actually made it to pilot season, and then tried out and was cast as Ed Stevens in the CBS pilot "Stuckeyville." CBS decided to can the show before it even began, so NBC picked it up, did a little work on it, and released it this year as "Ed." I bet CBS is feeling pret-ty stupid right now.

Tom says he likes playing the guitar and is active in all kinds of sports. That's nice. Even better, he says he's single. And while the series is filmed alllll the way across the country in New York, he still maintains his home in Los Angeles. Which isn't too far from where I live. Which is also happy news.

Meanwhile, "Ed" has been getting pretty cheery reviews from all the major entertainment publications and YOU still aren't watching it! I'll never understand you as long as I live. NEVER. What the heck are you thinking? I mean, what ELSE is there to do on a Sunday night? I expect to see all of you in front of your televisions next Sunday at 8. I'm serious. You know, I actually have a lot of power here. I'M the one putting up these write-ups every week to entertain you. Where would you people be without me? You'd actually have to be doing WORK at work right now! So, do not cross me!