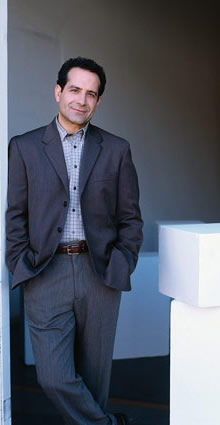 "Big Night" was a big hit, but only with a relatively small crowd. If you haven't seen it, you ought to rent it, though I caution you -- it will make you crave pasta like a something craves a something (not in the mood to think up witty simile), so be prepared. I myself saw it in a theater right across the street from the greatest Italian restaurant in my neighborhood, which was unplanned but ultimately extremely fortuitous. Even now, just thinking about it, makes me wish I had a bowl of tomato sauce.

Anyway, you probably also recognize Tony from his long-time TV role on the show "Wings," in which he played the romantic cabbie Antonio. Or maybe you saw him in "Quick Change" (unintelligible cabbie), "Barton Fink," "Men in Black" or "Men in Black II," "Gattaca," "The Siege," "Spy Kids," "The Man Who Wasn't There," or "Galaxy Quest." Mostly relatively small parts, but every one of them memorable to me, which definitely speaks volumes about him, as I have the worst memory ever to something a something (not in mood to think of witty turn of phrase).

To be honest, while I've always been glad to see Tony, I never really realized how completely cute he was until about three weeks ago, when his new show "Monk" first aired (USA Network, Fridays at 10pm) (but you knew that already, RIGHT?). Now before I get too far into this, I have to make a confession: when I first heard he was going to be in a made-for-USA television show, I was afraid. I was very afraid. Because all of the worst TV movies I've ever seen (and believe you me, I've seen a lot of them) have been made-for-USA TV movies. But USA has clearly hired a new director-in-programming (or DIP, as I like to call them) (heh), because not only is "Monk" terrific, but they also have "The Dead Zone," starring future Boyfriend Anthony Michael Hall. It's no "Monk," but it's not a terrible way to spend an hour either.

But back to where I was originally headed. Not only is it fun to see Tony on "Monk" every week for a solid hour, but we also get to see him do the wacky while we're at it. Yep, cuz if you flipped open the DSM-IV and turned to the section on "obsessive compulsive disorder," you'd see a glossy 8x10 of Adrian Monk. With a caption reading "lost cause."

Adrian is quirky, and that ain't the half of it. And while it's sometimes hard to laugh at someone who's nuts because their wife died (as Monk is and his wife did), sometimes you just can't help it. Monk is funny. Monk is strange and wonderful. Plus, it's just nice having a show back on the air that features a guy with some quirks. I mean real quirks -- and before you suggest that Ally McBeal ought to count, let me just say she ain't quirky, she's just freakishly self-absorbed.

Nope, we haven't seen the likes of Monk since Constable Fraser licked the bottom of his shoe in "Due South." And as someone who's got a fair number of idiosyncrasies herself, I can tell you it's always a pleasure to see someone even further off the deep end not only head a show, but look good while doing it. I mean, sure, even the very word (Kleenex) can make my stomach turn, and let's not even mention the stuff itself. Or the way it kind of disintegrates if you leave it in the bottom of a bag for awhile. You know what I mean? It sort of starts to fall apart into little dusty, ragged particles of softened, decayed paperness? Or, my God, the way it just MELTS into horrible, little. . . melty. . . bits. . .when it gets wet. Ugh! Stop. Stop talking about it. Seriously. Please. Stop. Now. Talking. About. It. You.

Anyway, you understand. It's not that OCD is funny. It's a serious disorder that's threatened to ruin Monk's career and life. But, um, well, okay, it's kinda funny.

There have only been three episodes so far, of course, and it's still sort of trying to find it's groove. But each episode has been better than the last and Tony himself is an absolute joy to behold. Not only very funny and incredibly sweet, but when did he become so damn good lookin' on top of it all? He's got such a kind face. A kissable face. And that shy, simple, crooked little smile -- oof, it hits me like a knee to the abdomen. I can't breathe. And I have every faith that in about two more episodes, this will be one of the best shows to hit the airways in a long time. As long as everybody starts tuning in RIGHT NOW to keep it alive.

Of course, if that turns out to be the case, that will mean "Monk" is a quirky, funny, clever television series that Meg and her Mom really love. Thus, it will be immediately cancelled. It happens, you know, at least 3 out of 5 times. And we're about due. "CSI" is doing really really well, and it's making me quite nervous.

But we may manage to pull this one off. If we all work together. Okay? And don't make me have to remind you twice about Vito. I'm not afraid to do what it takes to keep "Monk" alive. Even if what it takes is a felony.

A little background about Tony Shalhoub: he was born on October 8, 1953 in Green Bay, Wisconsin. His family is originally from Lebanon -- his father emigrated to the U.S. as an orphan at age 10. The Shalhoub family (Tony, his two parents, and his nine brothers and sisters) started a family company from the seedling of one grocery store in the center of Green Bay, and they and the rest of the Arabs in the town were very closely knit.

At age six, Tony's siblings introduced him to acting. One of his eldest sisters volunteered him to play an extra in her high school play. Even though Tony was left standing on the wrong side of the curtain during the final dress rehearsal, he knew he was hooked. His first passion always has remained the theater, where he first started acting seriously while attending college in Portland, Maine. He went on to graduate study at Yale School of Drama and then spent four seasons at the American Repertory Theatre in Cambridge, MA. For his work on stage, he's received a Tony nomination and has appeared a number of times on Broadway and in the New York Shakespeare Festival.

Tony has been married to actress Brooke Adams since 1992. They have two daugheters and they're all pretty cute so I won't hold my breath in the hopes he'll ditch his fam for me. Incidentally, the two of them (Tony and Brooke, not his daughters) are working together on a project together, along with Tony's sister Lynne. It's a movie called "Made-Up" that was written by Lynne, is being directed by Tony, and is starring Brooke. The movie is a look at how our cultural obsession with youthful good looks affects women who are told their value depends on their appearance -- it's more a comedy than a serious exploration of sociological trends, but ought to be provocative and interesting nonetheless.

After that, Tony is slated to appear in Joaquin Phoenix's next film, "Voltage," about an engineer who has just come into a new work place packed with a bunch of quirky co-workers (and since ex-Boyfriend Philip Seymour Hoffman co-stars as well, quirky sounds like an understatement). Then he's going to appear in "Against the Ropes" with Meg Ryan, which is about famous female boxing promoter Jackie Kallen.

And of course, while all this is going on, we'll all be enjoying Tony every week on "Monk." So, it looks like 2003 may be the Year of the Shalhoub, which makes me just as happy as a something in something (sigh -- maybe next week).