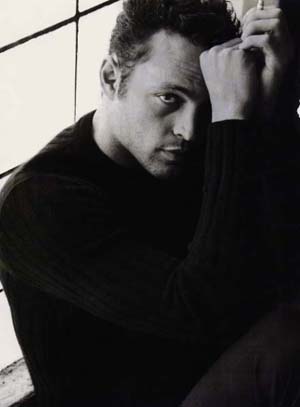 This week's Boyfriend is one I don't actually know all that much about. What's worse, in the few movies I've seen him in, he's played someone who was pretty much, well, let's just say it outright: completely undesirable. So, why is he making the Boyfriend grade? Because even though I know him best as a demented serial killer ("Clay Pigeons") and a guy who actually had to THINK about something I would've acted on in a heartbeat ("Return to Paradise"), he is SO good lookin' and also so extraordinarily charming in a really extremely horrifically unnerving yet utterly completely irresistible way, that I just, to be frank, simply cannot help myself.

Who is he? Why, Vince Vaughn, of course. That guy who keeps popping up in the "Seen, Heard, Said" column of your local newspaper for getting arrested after yet another bar brawl. And still we love him. Why? Southern drawl, tall, broad shoulders, sweet face, great laugh, disarming smile. 'Nuff said.

Now, for the record, I should reveal that I know I've seen him in a few movies in which he actually played a good guy. Wasn't he a good guy in "The Cell"? And "Jurassic Park II"? That's a real question, by the way. Why? Because I can't remember him in either of those two movies, even though I just saw them both within the last 6 months. That doesn't say much in a positive light for Vince, does it? But wait, maybe it does. Maybe it's just that when he's a good guy, he's just another really handsome good guy -- something Hollywood is chock full of. When he's a BAD guy, though (particularly one with a charming Texas drawl and a cowboy hat, like in "Clay Pigeons") he's completely unforgettable. The combination of those looks, that voice, and that scary glint in his eyes is one you can't shake off later. And even though you know he might punch your lights out at any moment (hey, apparently it doesn't take much to get Vince to want to fight), he'd clearly be hard to say "no" to in a social situation. Especially if the social situation involved candlelight, wine, and Vince with no shirt on.

Oops, did I just say that last bit out loud? Sorry. Ahem.

Anyway, the reason I keep talking about "Clay Pigeons" is that I just rented it last weekend. How I ever missed that movie, I'll never understand. Janeane Garofalo? And I haven't seen it? That's craziness! And, while I'm at it, let me also mention that it co-stars Joaquin Phoenix, future Boyfriend-of-the-Week (I PROMISE, okay? So stop harassing me about, wouldja?) (just kidding -- go ahead an harass me. I like it.) "Clay Pigeons" is, as I've mentioned, about a creepy serial killer (Vince) who kills gorgeous ladies and then sort of tries to pin it on Joaquin (I say sort of because he sort of pins it on him and then sort of tries to help him beat the rap -- he's crazy, what can I say?). Janeane plays a Fed on the case, which is just fun because she's so cute. It's not a "film," of course, but it is pretty entertaining, especially in that one scene when Vince is running around in his undies.

Oops, I said that out loud too, didn't I? Heavens!

Other movies I've seen Vince in include "Return to Paradise," which I really enjoyed, though I essentially spent the entire movie wishing I could smack Vince's character right across the kisser. I've seen him in "Swingers," too, though it's been so long since I saw that (about 1996) that I can't remember anything about him in it. Let's see, he was also in "The Lost World: Jurassic Park II," as I mentioned earlier (unfortunately, I also have no memory of him in that), and he additionally had a small role in ex-Boyfriend Sean Astin's great movie, "Rudy." I have no memory of him in that one either, to be honest, though at least this time, he wasn't a key character, so it's a little more forgivable. Yep, pretty much my only active film memories of Vince Vaughn are from "Clay," "Return," and the previews on television for the "Psycho" remake he did (which I've refused to rent on principle). Kind of pathetic, isn't it? Here I am dating a man I hardly know! What would my mother say?

The even worse news is that he's only got a few new movies out right now and only one in production. That's clearly NOT enough Vince exposure to make us happy. The first one, "Zoolander," is in theaters at the moment and I've seen it, I loved it, and I don't remember him being in it at all (this is terrible!). Then we have "Domestic Disturbance" with John Travolta, which has gotten some of the worst reviews I've seen since "Battlefield Earth" (who is Travolta's agent, by the way? Get him on the phone RIGHT NOW!). The one in production is called "Dust: An Extraordinary Correspondence," but I can't find out anything about it other than that it's being billed as a romantic adventure movie. Since it only has four characters listed on the IMDB and the third goes only by the name "Beautiful Mexican Girl," I'm a little afraid, however. And I should be afraid. Because Vince Vaughn is gorgeous and I'm clearly not seeing enough of him! Even when I'm looking right AT him, I'm clearly not seeing enough of him. This has to stop!

But no, really, it's okay. Because we do know that Vince HAS been in some really good movies in the past. And since clearly I don't remember seeing him in them, it must be time to rent them again. I'm always up for a viewing of "Rudy," for example. And you wouldn't have to twist my arm to get me to watch "Swingers" or "Jurassic Park II" again. I also have to admit, I would LOVE to see the episodes of "21 Jump Street" and "Doogie Howser, M.D." that he was apparently in. How fun is that? This time, though, I better pay closer attention. If Vince ever reads this write-up, I fear he will not be terrible impressed. Walking up to a famous movie star and saying, "What movies were you in again?" is probably not the best way to score a date with them. Although maybe they'd find it refreshing? Who knows.

A little biography: Vincent Anthony Vaughn was born on March 28, 1970, in Minneapolis, Minnesota. His parents, a salesman named Vernon and a real-estate agent named Sharon soon moved the family to Lake Forest, Illinois, where Vince spent most of his childhood. Vince was interested in theater early in life and grabbed a spot on a Chevy commercial when he was in his teens. Thinking he had it made, he packed his bags and took off for Hollywood, where he promptly became yet another struggling actor losing role after role while working various odd jobs around town. His first credited big screen role was in "Rudy," and it turned out to be good for his career in more than one way. Not only was it a relatively successful film, but it was the place where Vince met friend Jon Favreau, who was working on a script about out-of-work actors. Jon wrote a part into the script specifically for Vince and when "Swingers" hit the screens, people sat up and noticed. Not just people like you and me, either. People like Steven Spielberg, who liked the movie so much he gave Vince a part in Jurassic Park II. JP2 was a commercial smash, giving Vince the exposure he needed to start getting the big parts.

A little trivia: when Vince was in school, he was so fidgety and unfocused that he was running the risk of never graduating. So, he says, he decided to run for senior class president, thinking if he became a commencement speaker, they'd never hold him back. And, it worked, of course. Because, as I said earlier, it's got to be REALLY hard to say "no" to that face. Additionally, a high school classmate says he used to sing "Oh Sheila" at the top of his lungs during gym class, which leads me to suspect his gym teacher may have had a little something to do with pushing his butt out the senior class door (PLEASE let Vince graduate -- I can't take it anymore!). He's about 6-foot-5-inches tall and names all his pets with V-names (Viking, Vero, Vladimir, etc.).

But, probably the best thing about Vince Vaughn is that he is, as I keep saying, impossibly charming. I'll keep watching for him in things now that I've really experienced his charms for real (I had to watch "Clay Pigeons" twice cuz I thought he was so cute). And Vince, if you're reading this, don't take the fact I didn't remember you from "Doogie Howser, M.D." the wrong way. I love ya! I really do!

Vince's IMDB page
The Unofficial Vince V Home Page
The Man Behind The Man (a fan page)
The Vince Pages Back to my Homepage.