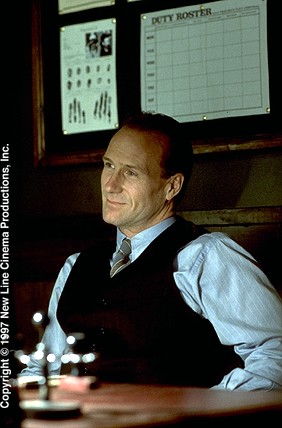 This week's Boyfriend comes to you for two reasons. The first is that I've always had a thing for William Hurt, despite the fact he always plays the same kind of character and that character can really get on your nerves after awhile. The second reason, however, is because I just saw the movie, "A.I." and I'm sure you're all talking about it amongst yourselves, and I just want to state my opinion on the film, for the record. Because I really like asking for trouble. A glutton for punishment. A masochist.

Yep, I hated it. I thought it was totally unoriginal, excessively cheesy, and brutally dull. Though I was impressed by individual performances (especially ex-Boyfriend Jude Law's), for the most part, I thought it was a fine example of everything that's wrong with Steven Spielberg movies. He was too heavy-handed, too convinced his audience was really really stupid. Better make sure we wallop them over the head a few times with every theme we want them to understand! Why else, after all, have the mother read "Pinocchio" to the kids? If you hadn't already made the connection, even before you got to the theater, you gotta be a few eggrolls shy of a pu-pu platter. Not only that, but there were several themes raised that were FAR more interesting than the "Pinocchio" plotline and instead of following through on those, Spielberg just teases us with them and then drops them! I hate it when that happens!

The last 45 minutes or so nearly killed me, I swear to god. I can't remember the last time I was so bored in a movie theater. One of my friends actually fell asleep and I caught myself tapping my foot impatiently. Me! Avid fan of some of the worst movies ever made!

Okay, now that I've gotten it mostly out of my system, I'll get back to the point. While it's true that, once again, William Hurt plays his usual, borderline-annoying character (the quiet, ultra-sensitive, emotionally scarred guy), I realized while I was watching his scenes that even though I can only take him in small doses, I really really like William a lot. For the most part, his characters move me, with only the occasional shimmy over the line that separates "quiet" from "boring." Since the last 45 minutes of "A.I." are pretty much a snooze fest, it gave me lots of time to think back on some of my favorite William Hurt movies.

The first one I ever saw remains my all-time favorite: "Children of a Lesser God." If you haven't seen this movie, you need to go rent it because it's great. It's about a teacher at a deaf school who meets and falls in love with a young deaf woman with an attitude problem. William Hurt is the teacher, of course, and he plays the part so well it kind of inspired me to investigate deaf culture myself. I was young then, and sort of made romantic connections like that a lot. If a cute guy plays a teacher in deaf school that must mean there are cute deaf guys out there. So, I better learn how to speak sign language so I can snag one. You see what I mean? I responded in the same way to movies like "The Competition" (started practicing the piano more fervently so I might one day snag a Richard Dreyfus) and "The Turning Point" (two words: Mikhail Baryshnikov).

Anyway, as the years passed, I saw more and more William Hurt movies and grew more and more in crush with him. To be honest, two movies sort of ruined him for me temporarily -- "The Accidental Tourist" and "The Doctor." While I enjoyed both those films, William's characters were just so maudlin, it made me want to take him by the shoulders, shake him hard, and yell "Snap out of it!" But, my flame was rescued from sure extinguish by "Gorky Park," "The Big Chill," "Kiss of the Spider Woman," and "Smoke." You'll note, however, that none of those movies is very recent. In fact, I hadn't seen William Hurt in anything for several years until about two months ago when I rented "Contaminated Man" and was horrified to see him in it (it's a dog, for one, and for another, he plays a truly yucky-looking man with a bad comb-over and twitchy personality).

So, in reality, "A.I." was good for one thing -- it let me know that William wasn't REALLY suffering from COS or "Comb-Over Syndrome" (that terrible disease that blinds newly balding men, thus making it impossible for them to see how truly ridiculous they look -- a similar syndrome hits women when they get to be about 80 years old and start having their hairdressers throw a splash of pink into their haircolor). And while his character in "A.I." is totally irrational and destructive, he was one of the few reasons why I didn't demand my money back after it was over (explanation for use of phrase "irrational and destructive:" what kind of maniac would create a robot that would love to death only ONE other person? And then make it so that robot could never age? That means that ultimately, the "mother" of the robot child will HAVE to consciously and deliberately KILL her son -- you can't take care of a 10-year old forever and besides, part of the thrill of being a parent is seeing your child grow UP. Who on earth would think a robot child that stayed exactly the same forever would ever be anything more than a toy someone could play with for awhile until the novelty wore off? Because when something never changes, the novelty always wears off -- why do you think Madonna is never the same gal twice? So, you see, even the premise was foolish. Nobody with a brain would ever have thought that was a viable plan.)

Alas, I digress. And I just know I'm making more and more enemies the longer I talk about that (stupid) movie. In my defense, I ought to say that this same thing happened to me when I saw "Mission: Impossible" -- I made the foolish mistake of being suckered in by the hype and went to see that movie (as well as "A.I.") on its opening night. No time, then, to hear reports and wait for the talk to settle. My expectations were gargantuan and I was let down heavily by the lack of depth and creativity I expected, based on the pre-opening buzz. I'll never make that mistake again, I swear. And, like "Mission: Impossible," I'll probably hate "A.I." less after I see it for a second time (though (also like "MI"), I'll never think it was as good as others seemed to).

Anyway, time for a little background on the Boyfriend. William Hurt was born on March 20, 1950 in Washington D.C. His father worked for the State Department and the family lived in Guam until William was six. That year, his parents divorced, and William went back to the states with his mother (though he continued to visit his father regularly, making it possible for him to see lots of foreign places, like the Sudan and Somalia). When Will turned 11, his mother married the heir to Time-Life, Henry Luce III. It was Luce who encouraged William to forego the traditional and pursue a degree in theology at Tufts. While at school, however, Will met Mary Beth Hurt, an aspiring thespian, and the two fell in love. Mary Beth inspired Will to give acting a try, and he went on to study drama at Julliard under the famous teacher/actor John Houseman.

William was a "discipline problem" from the beginning, though, and he ultimately left Julliard without graduating (though he did finish his theology degree at Tufts, which is much cooler anyway). He moved west after leaving school and earned his professional stage debut in a production of "Long Day's Journey into Night." From there, he traveled around the country, performing on various stages in various roles to various critical views. It's not for nothing, however, that he was nominated for a Tony award for a run of David Rabe's "Hurlyburly."

His film debut was in the strange sci-fi thriller, "Altered States" (1980) where he played a completely bonkers scientist. It was really the movie "Eyewitness" that brought him to the attention of mainstream audiences, though, as well as the attention of director Lawrence Kasdan who was so impressed, he almost immediately cast William in two of his movies -- "Body Heat" and "The Big Chill," both of which won Hurt some major acclaim.

Actually, "acclaim" is hardly the right word to describe the reaction to Hurt's acting in the 80's. In fact, he's been nominated for at least three Oscars -- one for his role as an imprisoned homosexual in "Kiss of the Spider Woman," one for his role in "Children of a Lesser God," and one for his role as a not-so-smert TV anchorman in "Broadcast News." But while he continued to make movies that garnered him tons of critical joy, Hurt never got used to the limelight and has remained a kind of background star. His ambivalence about fame and natural reclusiveness has done a lot to hurt his various relationships with family, including his now TWO ex-wives, and that one ex-girlfriend who tried to sue him (unsuccessfully, I might add).

So, he's not so lucky in love. Let's not hold that against him. We also won't hold against him the fact that he's got terrible taste in picking and dismissing movie scripts. For example, he was offered the lead in "Jurassic Park" and turned it down. And then he was offered the lead in "Lost in Space" and accepted it. Yikes! Will -- get a new agent, wouldja? But even despite the fact he's made more than his fair share of dogs, as I mentioned earlier, every now and then a William Hurt movie comes out that redeems him. And while I can't argue that "A.I." is one such film, I'm sure it won't be long until he makes one that qualifies. Maybe it will even be William's next movie, "Tuck Everlasting," a film about a strange family hiding out on the grounds of a stuffy Victorian household. They are discovered by the residents' 15 year-old girl, Winnie, and she quickly learns that the Tucks have discovered a spring that makes them immortal. Sure, it's gonna be a "family" movie. But then, so was "Jurassic Park," right? And it had man-eating dinosaurs in it! And besides, even if William Hurt doesn't make it work, it also stars ex-Boyfriend Joshua Jackson, and we'd watch him do just about anything.

So, here's to William Hurt. Even though when he's bad, he's very very bad, when he's good, he's incredible. And that counts for a lot. Plus, there's just something about his smile that makes me all fluttery on the inside. Add to it his soft blond looks and his gentle and intelligent voice, and what you have is a man who can make you forgive just about anything. Even "The Contaminated Man."